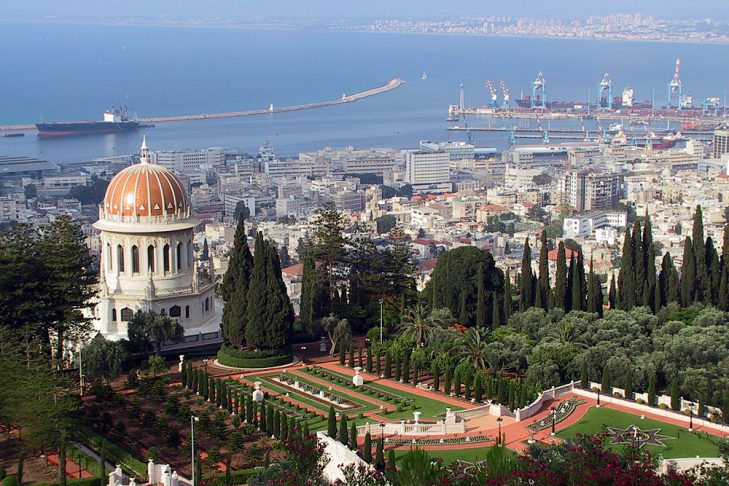 It’s impossible to see all of Israel in 10 days—you really have to pick and choose. Should you go from site to site, and city to city, in rapid-fire fashion? Should you go to the desert and touch the stone and sand and then hop down to Eilat for scuba diving? There’s an itinerary for everyone, and there’s no right answer.

But when Prozdor brings students to Israel, it’s clear that we are not in Israel to see everything, hike everything, taste everything, go from shuk to shuk looking for T-shirts and trinkets, or chase suntans on beaches up and down the coastline.

Our trips are about Haifa and about connecting our teens tangibly with the life, culture, diversity, and coexistence that are the hallmarks of Israel’s third-largest city. And I get it—some people love Jerusalem or Tel Aviv. But for my money Jerusalem is too stressful—the stones seem to tremble with tension and meaning—and Tel Aviv is too laid back. After all, you can’t party all day, every day, but some people manage to in the White City, whereas Haifa is real. It’s tactile, it’s industrious, it has an ebb and flow of everyday life and commerce that feels authentic, and it really is a twin city to Boston with its melange of geography (it’s on the ocean and a commercial hub), educational institutions (the Technion and University of Haifa mirror the academic diversity and excellence of Boston), high-tech industry (the cross-pollination of technology start-ups and a well-educated workforce in both cities is definitely a thing), and passion for sports (the Celtics and Maccabi Haifa both wear green!).

And listen, I’m biased. I’ve been doing work under the Boston-Haifa umbrella for 18 years now, since my time volunteering in Haifa on Project Otzma, and to date have taken something like 11 different groups to Haifa under the auspices of the partnership. At the same time, though, I make no apologies for claiming that there is no better place to spend a week in Israel, and no place that can inspire as much hope for the future of Israel and all of its citizens than the jewel of the northern coast. I left this trip with a fresher and more hopeful perspective on Haifa’s rich tapestry of religions and cultures than from any of my prior visits.

Consider these three pieces of evidence: Last Friday night I ate outside at Fattoush, a Middle Eastern restaurant in the German Colony in downtown Haifa, a few blocks up from the port, a few blocks away from where I lived in the winter and early spring of 2001, and a stone’s throw from the lower entrance of the Baha’i Gardens. I’d been there a few times, most recently two days after my son’s bar mitzvah in Jerusalem to cap off the celebration, and I’m struck by the sign that greets you as you walk under the trellis and into the patio area: “WELCOME: All sizes, all colors, all ages, all colors, all sexes, all religions, all types, all beliefs, all people SAFE HERE.” (If only we all went through life with that perspective.)

So on Shabbat evening at Fattoush, our waitress was Arab, the table next to us spoke only in Russian, our dining party comprised American Jews, there was an Israeli family next to us, the beer I was drinking was Palestinian, and I think I caught some Dutch or German from across the way. Stray cats cozied up on the awning to keep a watchful eye on the clientele, chill Arabic music played from the speakers, and so passed one of the more enjoyable evenings on the recent trip.

The al fresco experience at Fattoush came on the heels of our visit to Wadi Nisnas, an Arab-Christian neighborhood next to the German Colony, earlier in the week, where we got a short indoctrination into the falafel war in the Wadi, which pits Falafel Mishel and their neighbor-across-the-street Falafel Hazkenim in an ongoing debate about whose falafel is better. Don’t quote me, but I liked Mishel better.

Finally, our last Haifa meal came at Café Mandarin, a charming garden café set back from the road in Carmel Center, which we happily ate at on Shabbat afternoon, and was filled with secular Israeli Jews along with some Filipinos, Ethiopian olim, and others. In each of these three culinary snapshots I was reminded that food actually can bring people together in a meaningful and human way, and no matter where I was in Haifa, I was (again) struck by how integrated the city is. Mind you, it’s not a paradise of tolerance and coexistence, but it is certainly part of the lifeblood of the city.

If you follow Road 672 up past the university and out of Haifa along the ridge of Mount Carmel, you are treated not only to beautiful views of the Carmel Forest (to the south and west) and Haifa Bay (to the north), but you also wend your way through the Druze villages of Issifya and Daliyat-al-Carmel, which splay themselves out over the slopes and valleys in the triangle between Haifa, Yokneam, and Zichron Yaakov. The passage from I Kings about Elijah’s confrontation with the prophets of Ba’al, in Hebrew and in Arabic

A lot of tour buses stop in Daliyat, as there is some shopping and bartering to be done in the market area, and also make their way up to Muhraqa, the site where Elijah the Prophet slew the prophets of Ba’al and which is now the site of a beautiful Carmelite monastery. The chapel there is ringed with Hebrew scripture, the tour groups outside are frequently American pilgrims who read the passages from Kings in English, and the fascinating convergence of Druze, Christian, and Jewish narratives at the site is fairly unique. We went there last Wednesday while passing through Daliyat and were rewarded with stunning views of the Jezreel Valley, three Christian tour groups stopping off for a visit, the rakefot (cyclamens) blooming on the hillside, and I daresay a spiritual moment as we lit a candle in the chapel while reading the Hebrew passages on the wall.

But on a more personal and relevant note about our experience in Haifa, several of our students had home stays with Druze families in Daliyat whose children attend The Hebrew Reali School, our sister school in Haifa, and for Boston teens to experience the life and culture of Druze teenagers and their families was nothing short of remarkable. On Saturdays a lot of Haifa’im also flock to the villages, as life and commerce are a little more open than in Haifa, and the Carmel teems with life and an intersection of Druze and Israeli life and joie de vivre.

Still don’t believe me? I know; “coexistence” frequently gets bumper-sticker treatment and that’s it. The term also feels a little cheap—coexistence is a thing but it isn’t very affirming, and there are ways to sound out the tension in that word, as well as in terms like “diversity” and “tolerance” that make them easy to say but harder to do. I prefer action and affirmation than milquetoast platitudes. And boy, was I rewarded on Sunday.

Somewhere around Toronto or Montreal on our journey home, I opened up Facebook and saw a video that you really have to watch. You’ll see this text toward the beginning of the video, after the beautiful shots of the downtown area of Haifa near the Hashmonah Train Station and the Port, but read it now to set the table:

“On February 14, 2018, Koolulam invited 3,000 people who had never met before to sing in Haifa, in three languages, [in a ] celebration of coexistence, in collaboration with Beit HaGefen, the Haifa Municipality, and the Port of Haifa…. It took just under an hour to learn all the parts…and here is the result.”

Do yourself a favor and watch it. I dare you to not be moved, and I’m so sad that we missed it by four days in Israel, as we arrived in Haifa on the 18th.