Like most everything in this pandemic, the 2021 Grammy Awards—airing on Sunday, March 14, on CBS—will be produced and celebrated unlike any other year. The nominations feature a notable coterie of Jewish musical artists in myriad categories, including producer Jack Antonoff, rapper Drake and an orchestral adaptation of “The Diary of Anne Frank.”

Leading the way, however, is the Los Angeles-based band HAIM (meaning “life” in Hebrew). The three Jewish Haim sisters—Este, Danielle and Alana—are nominated for Album of the Year for “Women in Music Pt. III,” their third studio album, and Best Rock Performance for “The Steps.” (They were previously nominated for Best New Artist in 2015.)

The cover of “WIMPIII,” the sisters’ acronym for their album, shows them behind the counter of Canter’s Deli, the iconic Jewish delicatessen in Los Angeles. The sisters launched their band at Canter’s, regularly performing for bowls of matzoh ball soup. They often reference their Jewish identity in their work, and at the end of 2020, they appeared at the famed 92nd Street Y over Zoom.

Often interrupting each other and talking over one another, here are some of the highlights of our delightfully zany and spirited conversation. 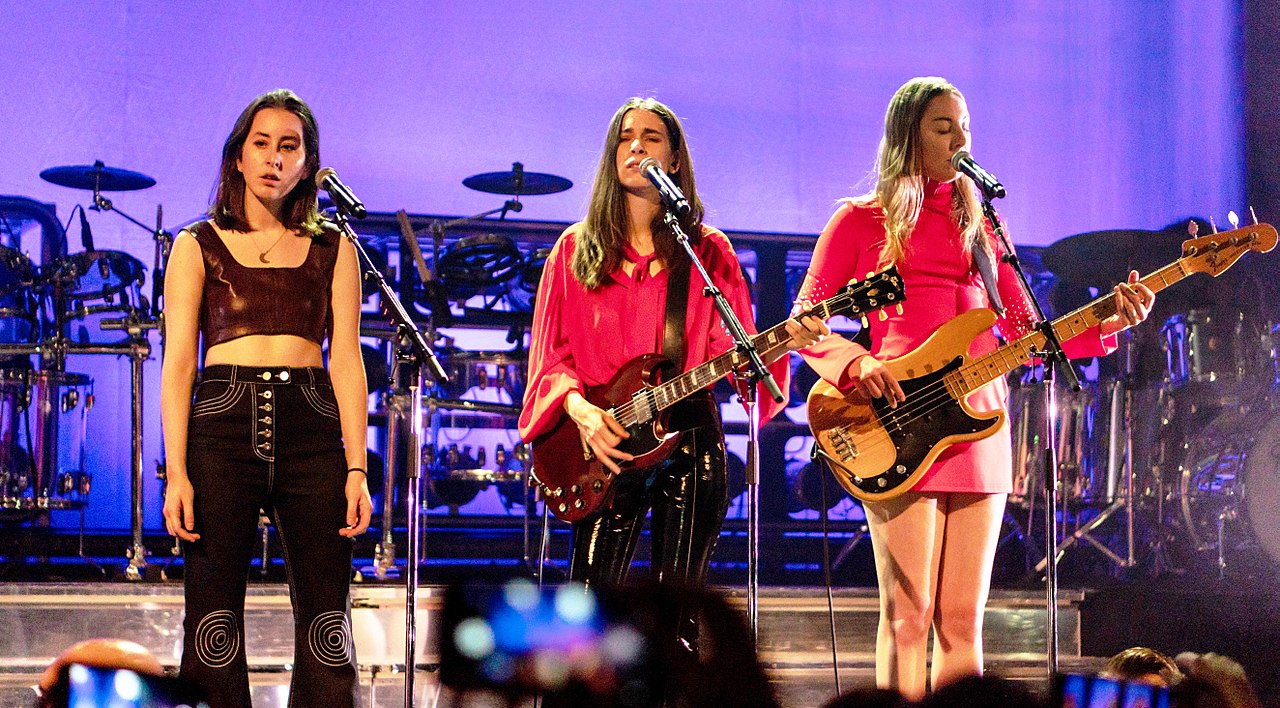 On being nominated for Album of the Year:

Alana: It’s very surreal, but I think it’s also great that we named our record after a dream that Danielle had where we were seeing women in music all the time. Danielle can attest to this: When she said that she wanted to call our album “Women in Music Pt. III,” we thought it was really funny.

Danielle: It has a funny acronym too, “WIMPIII.”

Alana: The fact that a record with the acronym “WIMPIII” is nominated for Album of the Year is pretty funny. We also weren’t together when we found out. My neighbors know that I’m nominated for a Grammy because I had no one else to tell! We FaceTimed and had a collective cry, and then we had to figure out when we were going to explain to our parents how to FaceTime. That took 45 minutes because we wanted to celebrate with them too.

Este: Our mother was a mess—a full blubbering baby; it was very sweet. Obviously, they’re really proud. But it was hard not to be with them to give them a hug. It’s still hard not to be around them and not give my parents a hug.

On how personal “WIMPIII” is:

Danielle: Our first album was a classic first album in that, as a songwriter, you amass a bunch of songs for the last couple of years until you make an album. We wrote “The Wire” in 2008, and it came out in 2013. Whatever we put on our first album, those were the songs that we had been working on for five years. And then on our second album, we had the same process, but we still had to write the songs. When we write songs, sometimes it’s super fast, and sometimes it’s just not. And so I think for our second album, it was a mixture of just being like, “Holy shit, I can’t believe we even get to make a second album,” and feeling that we wanted every part to be perfect.

Este: We had fun on “Something to Tell You” and “Days Are Gone,” but looking back, there was more of a freeing energy in making these songs. We’re still perfectionists to a fault, but with the advent of being in the studio, the world is your oyster. You can try drums on, and if you’re lucky, you can record drums as many times as you want. Or you can try it on a different type of drum set. These things just take time. But again, you can get in the weeds when you’re continually recording and re-recording and trying it again, instead of just letting the performance be the performance and then keeping it.

On releasing and promoting an album during a pandemic:

Este: [Releasing this album during a pandemic] was super interesting. We made this record to tour. Danielle loves the studio; I love touring, I love playing live events and she feels the same way. When we were making the record, we were most excited about [how] we were going to play this live. And then the pandemic happened. We were gearing up to go on tour. We planned to tour delis across America and then go to the UK and do some delis—maybe go to Australia. We did two deli tour dates, and then the pandemic happened. We went home and went back to the drawing board and said, “How can we do this from our home?” It was an exercise in creativity. This is the longest I’ve ever been home since I was 19 or 20. Then we had to figure out how to do a music video and be safe. We shot dance music videos in a backyard with an iPhone—most of the “I Know Alone” music video. The advances in technology are crazy.

Alana: The deli tour started in New York, and then we went to Washington, D.C. When we arrived in D.C., there were rumors of quarantine, and no one knew what that meant. Lysol wipes were getting stolen at the hotel. We had no idea what was going on back in LA. Danielle’s boyfriend FaceTimed us from the market and showed us that there was no toilet paper. Este has diabetes, so we went home. We knew if you have an autoimmune disease, you needed to really be careful. At that point, news was coming in that you only needed to quarantine for two weeks, and since we’re neurotic and Jewish, we decided, “We’re going to quarantine for two months and just make sure we’re all OK.” And we did. I didn’t see Este and Danielle for a really long time. It was FaceTime calls every day.

On “WIMPIII” and being vulnerable:

Alana: Especially with this record, we had no choice but to be open. It wouldn’t have felt authentic to put out a record that didn’t speak to what we were feeling at the time. Making the music and writing the lyrics felt so true to us.

Danielle: At one point, we were going to be a trio where I’m on drums, Alana’s on guitars and Este’s on bass. We had all these cool ideas that we had never done live before. Our head was in the tour.

Alana: This was by far the most nervous I’ve ever been putting out a record because of the subject matter. It was an extra cherry on top that people seemed to like it. But in the end, we needed to make this record for us, and what we were feeling. We needed to get all that stuff out. There was no other choice, and now that it’s out, it’s like we’re naked in front of everybody. I really did feel naked putting out this record because I don’t think I left out anything. I don’t think there’s anything left that we could have put on record. It’s all on there.