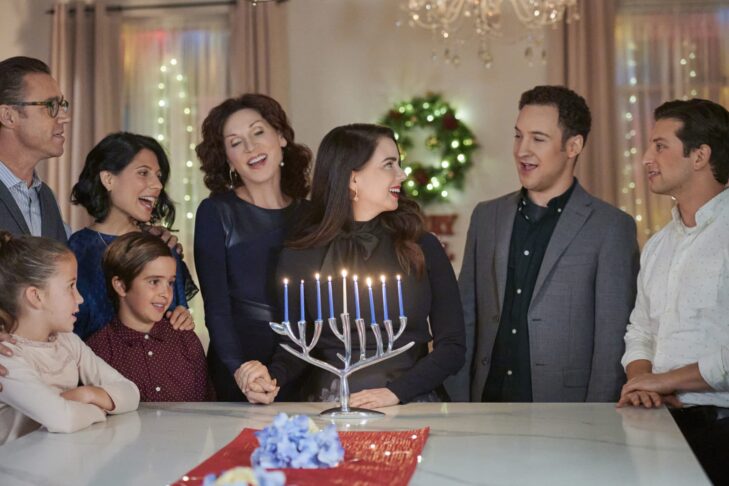 I’ll do almost anything for JewishBoston.com. I would taste-test supermarket latkes and interview 1970s comedy legends. But screen a Hallmark Channel holiday movie? Almost a bridge too far.

In my mind, watching a Hallmark movie is like injecting a liquified Yankee candle directly into your veins: unbearably sweet and certainly unadvisable, and quite possibly toxic. Like so many others, I always assumed Hallmark movies were wastelands for Z-list actors reenacting the same feeble, convoluted plots in unsightly sweaters and shoulder pads. They are movies to take Nyquil to, best screened during a comfortable illness while leaning on a heating pad.

Still, when I was asked to watch Hallmark’s new interfaith Hanukkah movie—”Love, Lights, Hanukkah!“—I couldn’t refuse. I’ve finished “The Undoing” and “The Queen’s Gambit.” The highlight of my entertainment life has become refreshing my Instacart order. In other words, I had nothing else to do.

And, reader, the mistake was mine. A Hallmark movie—cheesy, predictable, with gauzy lighting and just the mild hint of drama—is what we all need right now, as winter’s chill sets in and absolutely nothing in this world is predictable. These films require no deep thinking, and they meander along with a rhythm as reassuring as the beep of a microwave reheating last night’s mac and cheese.

The movie, improbably set in Cleveland, features “Taxi” star Marilu Henner as Ruth, a widowed Jewish matriarch who placed a daughter for adoption long ago, the result of a short-lived romance with an Italian military man. Her two other kids now run a Jewish deli, and they specialize in weird latkes for the holiday season. (“Choco-latkes” don’t make the cut.)

Jewish actress Mia Kirshner, meanwhile, stars as Christina, who ran a restaurant with her Italian, adoptive mother who died before the holidays. She’s especially fragile due to a broken-off engagement and drowns her woes with Christmas ornaments and puffy sweaters, and by taking a DNA test. 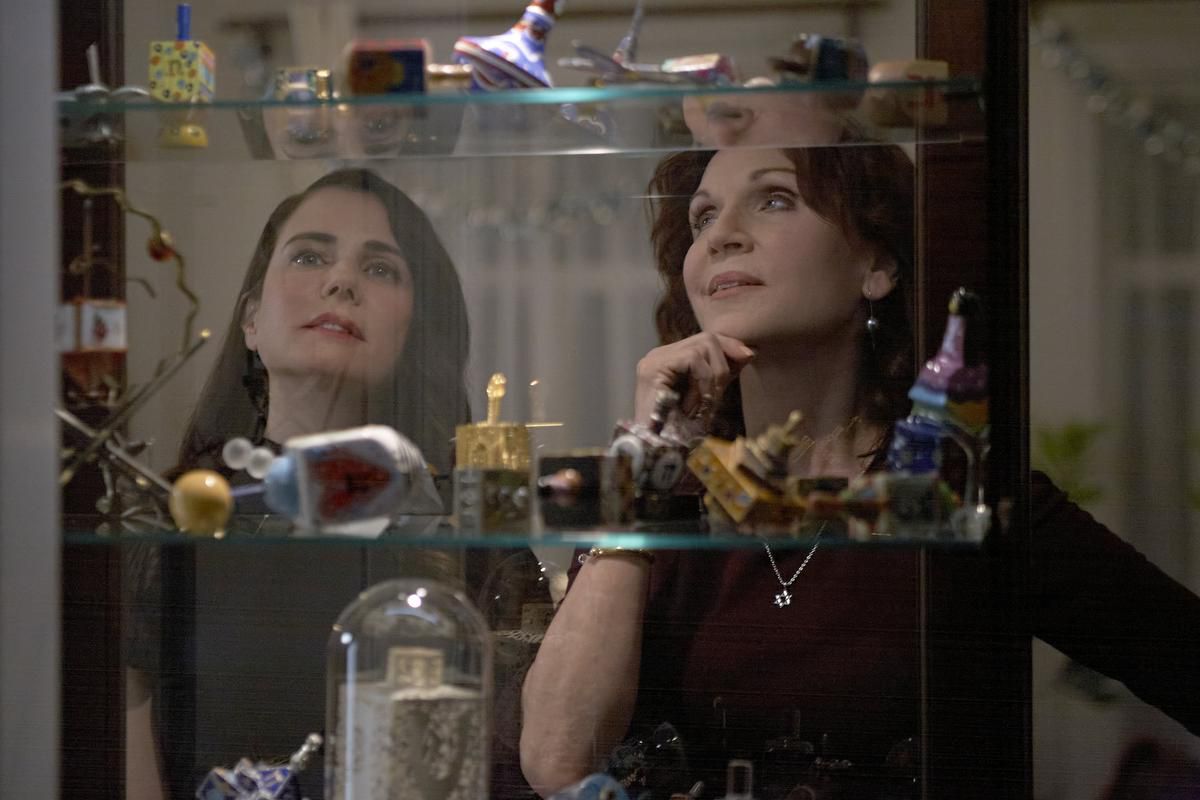 I assumed Kirshner was some kind of random Hallmark recruit who didn’t command much clout. No, she actually has had a huge career on “The L Word” and once dated legendary and very edgy playwright Sam Shepard, RIP, which sent me down a rabbit hole of Googling, which was totally fine, because this is the kind of ambient entertainment that allows and even encourages simultaneous internet browsing.

Also starring is Ben Savage—who looks just like his adorable brother Fred!—as awkwardly lovable food critic David Singer, who once panned Christina’s restaurant in a scathing review. He’s a friend of Ruth’s family, hanging out at their house before taking off for Europe to research a book.

Christina gets her genetic results on cue and discovers her Jewish heritage. She then receives an email from her biological family and decides to visit them at their happy McMansion. In short order—as in, 30 seconds, over brunch, with minimal emoting—it’s discovered that Christina is actually Ruth’s daughter. Single tear.

They quickly coalesce into one big happy family, more or less, and Ruth bravely contacts her long-lost Italian ex to stage a reunion. No tension, no big emotions. It’s all so snuggly and easy! Just the way life should be. Christina even learns how to make latkes with her bio mom and discovers how to identify challah. (Yes, she is supposed to be a chef. Yes, she’s never heard of challah before and does not know how to fry a potato. Go with it.)

What follows is a slow-drip infomercial of gift-opening, potato-peeling, wine-clinking and menorah-lighting. Christina learns more about her Jewish heritage; David chastely flirts with her while rhapsodizing about kugel and rare wines; and the two other adult kids adjust seamlessly and diplomatically to learning about their mom’s random ex-husband and child with no drama at all. (Are these people even Jewish?)

Will David and Christina find true romance? Will he flee to Europe to write his book or remain in Cleveland? Will Christina track down her Italian father? Will she ever stop raising her eyebrows in constant disbelief? I won’t give away the rest of the plot. And, truly, plot is secondary here. You can watch this G-rated, family-friendly offering while writing holiday cards, folding laundry or drifting off to sleep.

Is this fine art? Nope. But in a world upended by angst and drama, in an era where we can rely on so little, it’s comforting to know that Hallmark hasn’t changed its formula one bit.

“Love, Lights, Hanukkah!” is playing on Hallmark Channel, with additional showtimes through Dec. 31.