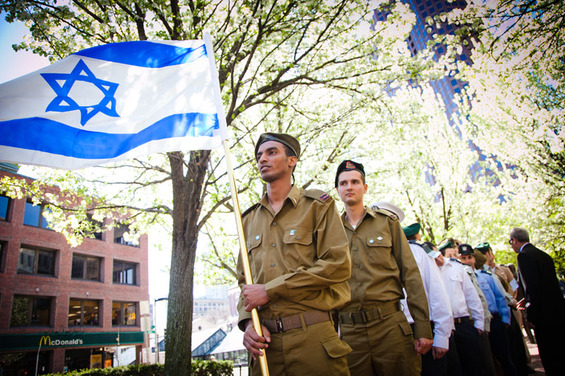 Far too often we hear about the failure of Israeli leadership, how those in power lack what Israelis call “rosh gadol,” or long-term vision. But this Yom Ha’atzmaut, as we celebrate Israel’s 63rd year of independence, I would like to share why we should all be optimistic, even in an era of much uncertainty.

Recently, my colleague Ari Applbaum suggested that we need to create a Taglit-Birthright – USA, where Israelis can visit Jewish communities in the Diaspora to learn about Judaism and about themselves in the same way that hundreds of thousands of Diaspora Jews have done on Taglit-Birthright in Israel. I’m proud to say this Taglit-Birthright USA has already started in the form of the Boston-Haifa Connection’s Hatikvah Soldiers Mission.

This partnership between Combined Jewish Philanthropies, Boston’s Jewish Federation, and Israel’s Ministry of Diplomacy and Diaspora Affairs, is truly one of a kind, and one that should be replicated across the country. This past week, 14 active duty officers from the Air Force, Navy, Infantry, Intelligence and Education branches came to Boston to meet members of both the Jewish and non-Jewish communities, to share their stories, and to bring a more personal side of Israel to America. I had the opportunity to spend a lot of time with the delegation and am truly in awe of not only how they represented their country, but how much of themselves they gave, and how much they took advantage of every day and with every group they were meeting. Since it’s not an official IDF mission, all of the officers used their personal vacation time to come here. And there are countless others who would do the same if given the opportunity.

In the world of Israel education and advocacy, there are so many theories as to how best to bring Israel to Americans in a way that resonates and isn’t simply a page of talking points. This mission does just that, serving as an invaluable resource for someone interested in learning more about life in Israel: the chance to find out what it’s like to be a coordinator of Israel’s cooperation with the UNIFIL presence along the border with Lebanon; to learn from an electrical engineer about how the Iron Dome Defensive system works; and to hear from an officer in the education corps how the IDF’s internal education department works and why they place such a high value on education, even among the combat units.

The Israeli Consulate hosted a final ceremony where four of the officers were scheduled to speak and reflect on their experience. But a fifth was so moved by his experience in Boston that he asked to speak on the spot. Here’s Hatikvah Mission participant Shahaf, an officer in the Navy, in his own words:

“You all probably know about Birthright. Birthright in Hebrew is called “Taglit,” and Taglit is actually discovery. For me, this was my discovery. I have learned so much about American Jewry, and about opinions and views of both Jews and non-Jews in America. I know I’m going back to Israel with conclusions about how we, as Israelis, have to make the religion more approachable. I know that I’m coming back to Israel feeling so much more strengthened.

“Today, we fight on the ground, at sea, in the air. But we fight also on different levels. And the war, or the battle, for world opinion is one of our biggest battles. I think by coming here, I’ve learned that because of us being the stronger side these days and because of media showing what it chooses to show, it will be a long-lost battle unless we make it personal all the time. Make it personal, bring your story. Meet people. Make them connect to the story.

“So what I’m here for is to thank you because I know that I’m thrilled about the knowledge that I was privileged to gain by this experience that I could have never gained any other way.”