HBO’s “Oslo,” the film based on J.T. Rogers’s Tony Award-winning play of the same name, flashes on an image that occurs early in the story. It’s a PTSD-like flashback in which two boys—one wearing an Israel Defense Forces uniform and the other in jeans wearing a keffiyeh—come face to face in a Gaza street. Both of them, caked in the dust of a bomb blast, have the same expression of fear. It’s a stunning moment, an image that speaks to the competing realities of Israeli and Palestinian narratives in one of the most contested pieces of real estate in the world.

It’s impossible to watch “Oslo” without thinking of the current crisis unfolding in Israel and Gaza. The clandestine negotiations that took place over six months in 1993 also seemed intractable. Bold and out-of-the-box thinking provided progress. Then the tragic assassination of Yitzhak Rabin in 1995 set everything back so that the work done in Norway felt as if it was all for naught.

The discussions that were the basis of the Oslo Accords were all the more unique in that America was left out and purposely not informed of this makeshift diplomacy. Instead, Mona Juul, a junior Norwegian diplomat, and her husband/co-facilitator Terje Rød-Larsen, a sociologist and head of an Oslo think tank, facilitated the talks. It was a unique situation in which the duo was emphatically non-partisan, refusing at every turn to adjudicate the heated meetings between the Israelis and the Palestine Liberation Organization (PLO).

Initially, the talks were conducted with two University of Haifa professors—Yair Hirschfeld and Ron Pundak—whose involvement signaled the unofficial status of the early meetings. Lurking in the background was the seemingly insurmountable fact that Israelis directly engaging with PLO officials were breaking Israeli law.

The subterfuge inherent in bringing the two sides together is underscored in unofficial airport pickups—”no motorcade,” says Ahmed Qurei, known to his friends as Abu Ala. He and his colleague Hassan Asfour climb into the backseat of Rød-Larsen’s non-descript car. They speed up a scenic coastal road to Borregaard Manor in Sarpsborg, 60 miles outside Oslo. The scene evokes a secret affair rather than private diplomatic meetings.

The PLO officials soon overwhelm the Israeli professors. Asfour, in particular, is an intimidating figure—frequently appearing as if he’s on the edge of fisticuffs as he lists a multitude of injustices and sins he ascribes to Israel. As the emotional temperature rises, Rød-Larsen insists that the personal and political take place in two different rooms. In one room, politics unfolds as intense, passionate arguments. In the other room, the alcohol flows freely. Jokes abound and the manor’s housekeeper keeps everyone happy with her delicious waffle desserts, perhaps the most effective diplomatic maneuver of all. 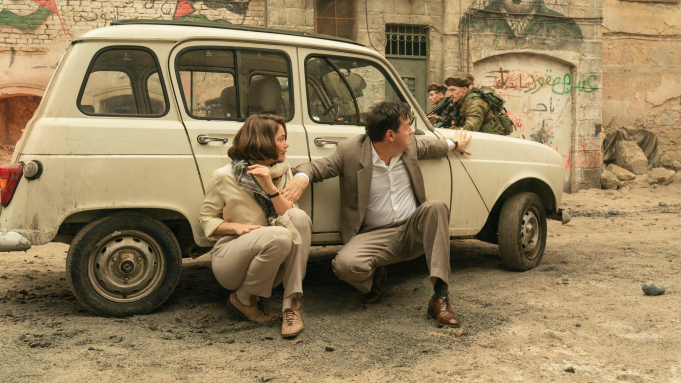 The futility of continuing these discussions with powerless citizens becomes a point of contention for the PLO. They insist on dealing directly with Israeli government officials. Their request is answered in the form of Uri Savir, the foreign ministry director who has authority to negotiate on behalf of both Shimon Peres and Yitzhak Rabin. Savir raises the stakes of the negotiation with his bravado and, as portrayed by Jeff Wilbusch, his machismo. It may be an obvious setup, but it’s an affecting one. In one scene, after Savir and Abu Ala fiercely argue, the two retreat and go for a long walk in the Norwegian winter, discovering their shared dream for peace. It’s a notable moment that bears out Juul and Rød-Larsen’s wisdom in arranging the simple act of sitting across from one’s enemies and experiencing their humanity.

Along with Wilbusch, the ensemble cast includes outstanding performances from “Shtisel” alumni Dov Glickman as Yair Hirschfeld and Sasson Gabay as Shimon Peres. Ruth Wilson and Andrew Scott bring quietly powerful energy to their roles as Juul and Rød-Larsen. Salim Dau as Abu Ala and Waleed Zuaiter as Asfour bring passion and authenticity to their roles.

After protracted discussions and multiple drafts, both sides agree on a Declaration of Principles. But then comes the unyielding IDF lawyer Joel Singer, arriving in Norway with 200 questions from Peres about the document. Singer, the author of the rules of engagement used by Israel’s army to subdue violence in the territories, is an objectionable figure to Asfour. Yet both sides forge ahead, even as the Israelis are convinced they are voluntarily ceding land and the PLO believes they are reclaiming what has always been rightfully theirs.

In scene after scene, Israeli and Palestinian negotiators alternately tear drafts upon drafts of the declaration until a mutually acceptable agreement is finally reached. Juul and Rød-Larsen then deliver the document to Shimon Peres himself, who is on a state visit to Stockholm. After more deliberations conducted on speaker phone between Abu Ala, Yasser Arafat’s official representative, and Peres, Peres signs off on the agreement. Soon after, PLO officials are heard weeping over the phone. They never thought they would live to see this day. It’s an inspired moment—a moment of holiness that transcends politics.

The end of “Oslo” shows the famous news footage of Bill Clinton situated between Rabin and Arafat to witness their handshake on Sept. 13, 1993. At the time, I worked in The Forward’s Washington, D.C., bureau, whose offices were in the National Press Club. There was a palpable optimism in the city on that September day. I rode an elevator with a fellow reporter who turned to me and exclaimed, “That was the handshake heard around the world.” At that moment, his mixed metaphor made perfect sense.

But perhaps it’s more affecting to move beyond the exuberance that handshake brought on and reflect on this line of eternal truth from the film: “Our peoples live in the past. Both are obsessing over what we have lost. Let us find a way to live in the present together.”

“Oslo” is now streaming on HBO.