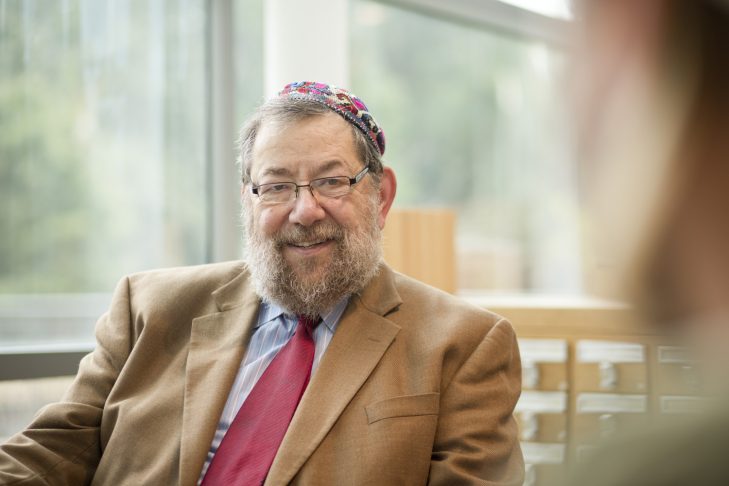 Rabbi Arthur “Art” Green, founder of the Rabbinical School at Hebrew College, has won a National Jewish Book Award in the category of Contempo­rary Jew­ish Life and Prac­tice in Mem­o­ry of Myra H. Kraft. Winners will be feted at a virtual celebration on Monday, April 12.

A distinguished scholar, writer and theologian of Hasidism, Green’s prize-winning book, “Judaism for the World: Reflections on God, Life, and Love,” is a beautiful, exceptional collection of hybrid essays that enlightens and amplifies the category in which it has been honored. While this is Green’s first National Jewish Book Award, it is his 17th book.

Green, who recently celebrated his 80th birthday, was born in Newark, New Jersey. His father, an adamant atheist, grudgingly accepted his son’s growing fascination with Judaism. Green attended Camp Ramah and eventually attended Hebrew school at his grandparents’ Orthodox synagogue. It was a positive experience, and he practiced Orthodox Judaism from ages 12 to 18. At the end of college, he returned to a traditionally observant Judaism influenced by neo-Hasidism.

At Brandeis University, where Green matriculated at 16, he realized his “sense of mission” to plumb the mystical tradition. The Hasidic embrace of spirituality and joy, the oneness of being and the absence of guilt and authority was a Judaism he could relish. After one of his professors assigned him an essay to read on Hasidism’s fundamentals, he knew he wanted to spend his life studying, articulating and integrating those precepts in a spiritual life.

As he writes in “Judaism for the World,” he was drawn to a religious practice that “uncover[ed] and uplift[ed] sparks of divine light, restoring them to their single Source.” In his book, Green details seven principles of a neo-Hasidic Judaism that underscore the joy in serving God and the “inward devotion and acts of outer-directed goodness.”

Green also connects his devotion to neo-Hasidism with his mission to shape a Judaism of the future by training rabbis. In a wide-ranging conversation with JewishBoston, he spoke about prayer in a post-Holocaust world, believing in the Torah without current access to divine revelation and why he is a “neo-Hasidic heterodox traditionalist.” Here are the highlights of the conversation. 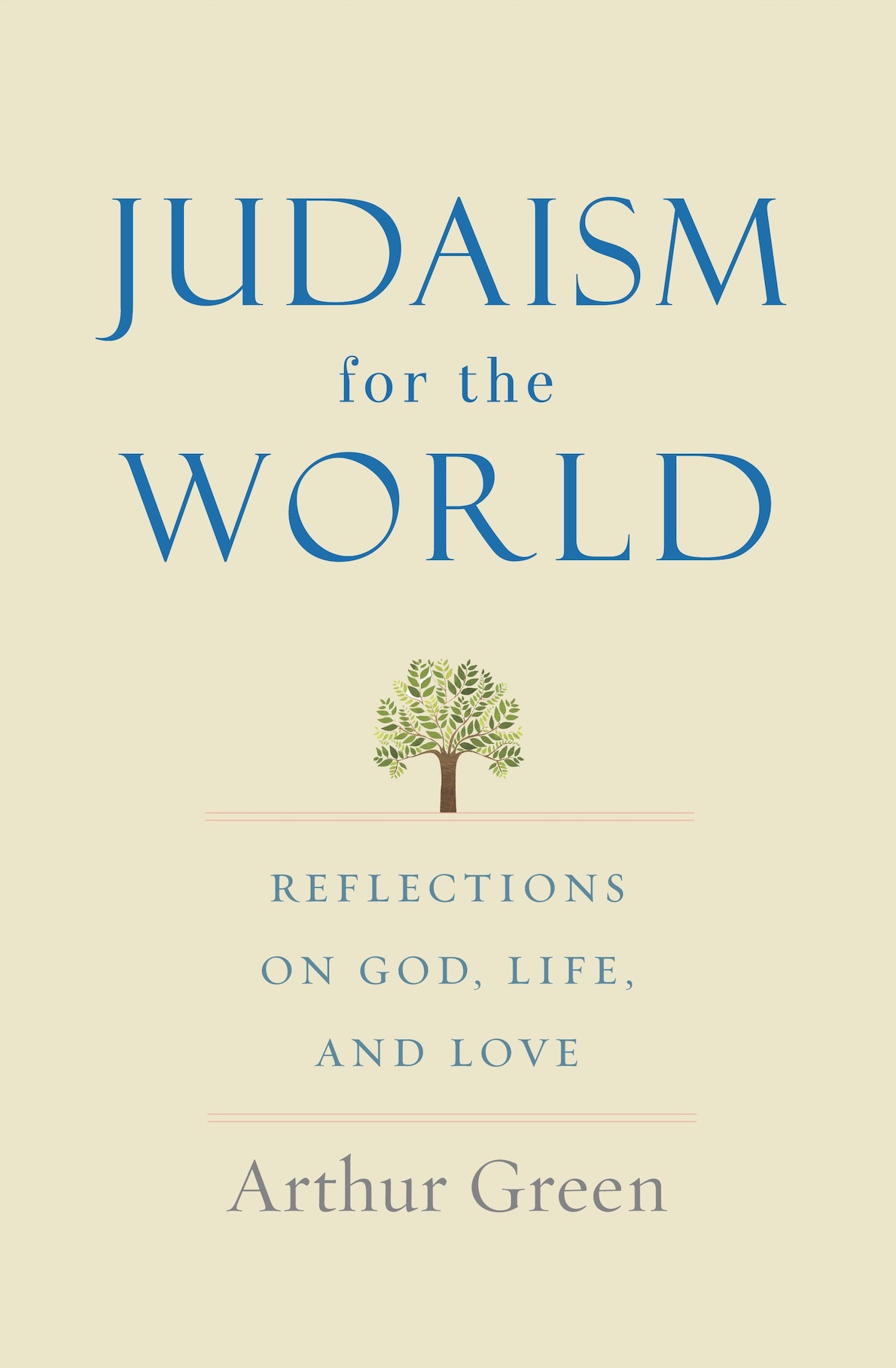 On reconciling the creation story with scientific fact:

“The world is filled with divine presence, and there is sacred mystery to uncover. Mystery means that there is a One that underlies the diversity of life. In Jewish language, we say that God created the world, and our Judeo-Christian way of talking about the world is also through the accepted scientific narrative.”

On living according to the Torah even if we are not literal believers in its divine revelation:

“The question is not one of authority. In other words, do we have to do something, or God will punish us? This is not the God I believe in. I love living a Jewish life; it is a meaningful way to express my gratitude for living in the world. To share this life with others is a great blessing, a great gift; whether by God or prior generations is not a distinction that is important to me. It’s a privilege to have this tradition. I want to carry it on because I love it. It enriches my life so much. If I miss an opportunity to do a mitzvah, I’ve lost an opportunity; it’s not as if I committed a sin. There are no sins in a ritual realm, and I don’t believe in a commanding God. All rituals are a human response to a discovery of God created by human beings. There is no divine authority for ritual behavior—ritual comes through the human community. I don’t know a God for whom ritual transgression matters.”

On the meaning of prayer in a post-Holocaust world:

“The Holocaust threw in our faces that prayers are not answered in a direct way. Despite all of the prayers of Israel, 6 million Jews were murdered. In the Book of Job, the righteous are not necessarily rewarded and the wicked punished. Prayer is removed from the question of reward or punishment, and petitionary prayer is not answered in a perceptible way. We pray to think about existence. We pray because it’s beautiful in our lives. We pray because we sense some religious presence in our lives. Rabbi Pinhas of Korecz—[a friend of the Ba’al Shem Tov and an early and influential figure of early Hasidism]—said: ‘People think that you pray to God, but that is not the case. Rather prayer itself is of the essence of divinity.’”

On his self-description as a “neo-Hasidic heterodox traditionalist”:

“I can’t be an Orthodox Jew or an Orthodox anything. Truth comes in small packages. The Talmud says the whole and broken tablets were both placed in the ark. The broken tablets are for our generation. I can’t swallow an explanation that something is the [definitive] truth. I put the tablets together for myself and have to be heterodox to do that. I find meaning and beauty in the tradition, and if I don’t find something meaningful or beautiful, I leave it aside. As time has gone on, I’ve taken on the full mantle of observance and live a very traditional Jewish life.”

On the power of prayer:

“The power of prayer is in the moment between speech and silence. If the synagogue service is orchestrated well, then moments of silence are important. So many Jews are using meditation as preparation for prayer. Words and silence help us get our balance back. We Jews chatter a lot, and prayer can get overly chatty. Having more silence would be good. When you read a poem and love it, you don’t ask yourself, do I believe in every word? The purpose of the poem is to be evocative, to speak to a different level of the mind. It’s not that I believe every word this poet says, but this poem awakens something in me. Prayer is meant to be poetic; it’s not prose. When I think of God parting the Red Sea, I don’t believe that as a historical event, but it evokes the miraculous and wondrous. It is Jewish language for the miraculous and wondrous. We have to be open to that in a poetic response rather than a literalist response.”

On a solution for the Israeli-Palestinian conflict:

“I believe in an Israeli-Palestinian confederation—two states linked to one another. We can no longer expect that all the settlers are going to leave the West Bank. I have opposed the settlements since 1968. They were a terrible mistake both morally and strategically. But it’s done, and the settlers won; I don’t think that can be reversed. I support two states with open borders and a shared capital in Jerusalem with people living on either side. Israelis live in Palestine, and Palestinians live in Israel and have freedom in both places.”

On his rabbinic ordination two days before the 1967 Six-Day War:

“When I look at my students ordained a year after Trump was inaugurated, that too was a difficult moment. The Six-Day War was a big turning point. It was negative with regard to the occupation, but it was a positive moment for the appearance of a new Jewish pride. Jews felt more proud to be Jewish, and a new Jewish counterculture developed. 1967 and 1968 were crucial years in Israeli history and American history. A new generation emerged in the late ‘60s, and those years very much formed me.”