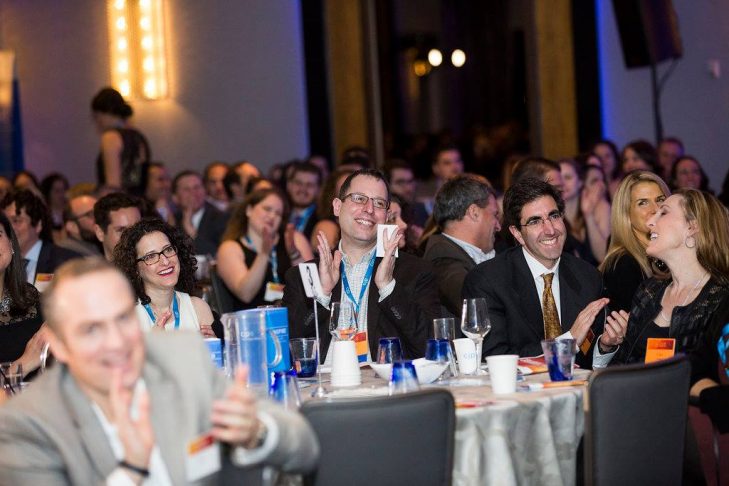 Chai in the Hub 2016 (Photo: Hannah Cohen Photography and Elan.K.Photography)

They are teachers, Jewish professionals, attorneys, scientists and activists. This year’s Chai in the Hub honorees reflect the pluralism, diversity and creativity that distinguish Boston’s Jewish community. Now in its fourth year, the annual event honors 18 young adults, ages 22 to 45, who have been identified as innovators and change agents throughout the Boston area.

Among them is Rabbi Lila Kagedan, an innovative educator and glass-ceiling destroyer who founded Sulam Brookline. This after-school program, which aims to bring an immersive Jewish day school level education to its students, gets its name from the Hebrew word for ladder, “sulam.” This moniker references the ladder in Jacob’s dream and can also be aptly translated as “connector.”

Last year, Kagedan, who was brought up in Montreal, became the first-ever female rabbi hired at an Orthodox synagogue. She told JewishBoston: “I didn’t feel I was going to be able to do my work to the fullest degree without the title ‘rabbi.’ When I graduated from rabbinical school, I went through an identical curriculum as my male colleagues and this was the most obvious title I should take.”

James Cohen, the director of development at Keshet, is thrilled to be in “such amazing company.” The Massachusetts native began his Jewish communal career in Miami, where he raised funds for the Jewish federation. It was Keshet’s commitment to LGBTQ equality and inclusion that eventually drew Cohen back to Boston. Cohen’s volunteerism includes co-chairing Boston’s Jewish Community Day School parent association and participating in the Community Hevra Kadisha of Greater Boston, an organization that provides end-of-life rituals to all Jews. “I got into Hevra Kadisha work as someone deeply committed to Jewish pluralism,” he told JewishBoston. “Once I started doing it, I realized how beautiful it is. It completely changed my feelings about the end of life.”

Cohen is also the father of two sons, 12 and 21, whom he adopted while still living in Florida. He noted that, at the time, adoption was not legal for gay people in the state. “Foster care was the only option available to become a parent, and I parented a lot of foster kids,” Cohen said. He was eventually able to adopt his first foster placement and, a few years later, another child. He credits his younger son, who asked him why the family did tzedakah, or charity projects, only on the weekends, for steering him toward his life’s work. “It took some time to synthesize my different interests, but eventually I figured out that I could use my sales experience to fundraise,” Cohen said.

Rosa Kramer Franck has also worked in the Jewish community as a fundraiser, a calling she found early as a student at UMass Amherst. A native of Pittsfield, Mass., her first job out of college was with the Yiddish Book Center in Amherst. “That’s where I fell in love with working for the Jewish community. I began to live my life around the Jewish calendar,” she told JewishBoston.

When she moved to Boston, Franck continued fundraising for CJP. She later attended the Hornstein Jewish Professional Leadership Program at Brandeis University, during which time she interned at Mayyim Hayyim. She joined the community mikveh as its development director after graduation. Franck has raised funds for the past three years for the Vilna Shul, work she described as “serious and fulfilling.” The Jamaica Plain resident also co-chairs The Rashi School’s parent-teacher organization and sits on the board of Congregation Kehillath Israel, where she chairs the membership committee. “It’s a great privilege and pleasure to live in a place where there is so much happening,” Franck said. “I’m grateful for the opportunity to give back to this vibrant community.”

Another Chai in the Hub honoree, Mike Ross, began his political career in 1999 and, at 27 years old, was one of the youngest Boston City councilors ever to be elected. He eventually served as the president of the body, and ran for mayor of Boston in 2013. “I saw the city in a new light,” he told JewishBoston. Today, Ross is a real estate attorney with Prince Lobel in Boston. He is “helping to build the city’s skyline in the private sector, versus someone who regulated it in the public sector,” he described. On being selected to receive a Chai in the Hub honor, Ross described CJP as “a wonderful organization I hold dear.”

Ross is also a first-generation American whose father, Stephan Ross, survived 10 concentration camps in five years. “That experience,” he said, “informs my past as well as my present. It’s very important that the Jewish people understand today’s refugee crisis in the context of our own background and history.” In 2014, President Barack Obama appointed Ross to serve on the United States Holocaust Memorial Council.

Meet the 18 honorees and hear from guest speaker Gail Simmons, culinary expert, food writer and permanent judge on Bravo’s “Top Chef,” at the event on Saturday, Jan. 28. Pre-registration is now closed, but walk-ins are welcome at the door.