You probably have noticed that I have not been posting lately on my Facebook page and on “The Food Flirts” Facebook page.

For the last two-and-a-half years I have been Sheila’s caregiver through her recuperation from a partial hip replacement and through a diagnosis of Alzheimer’s disease.

Because of the pandemic, I have not had any additional in-home help, but the support I have received from friends and family members has been extremely helpful when I have not been able to leave Sheila to go shopping, go to the library, or to mail a letter.

Alzheimer’s is a terrible disease. It is the monster under the bed. It strikes patients differently. No one experience is identical to another.

Because Sheila is smart, I was told by her neuropsychiatrist that she was able to function well beyond the onslaught of the disease.

When Sheila was in rehabilitation after her partial hip replacement, I was called into a room by a nurse and told that my sister would never be the same again. I shed my tears, and the nurse strutted down the hall whistling to himself while my world fell apart.

In November, I will turn 80. This the first Jewish New Year that Sheila and I have been separated. She has transitioned to a memory care unit in a very good assisted living residence. Unfortunately, the residence is not near Cambridge, and I don’t drive, so I’ve been putting together a patchwork of rides from friends and family, and services like The Ride.

My goal was to find the best residence I could find for Sheila, and I did. She has a lovely apartment and is surrounded by compassionate caregivers. I brought her her favorite coffee mug, and her Chanel No. 5 lotion, along with the framed newspaper ad for her first business, Regal Roses, which she started at 16. Sheila came up with the idea of selling frosting roses for home bakers to decorate their cakes.

Sheila believes that she will get better, and I have transitioned her by telling her that she is in a rehabilitation facility to make her well. She has accepted this. In the medical profession, this is called a “fiblet” where one goes along with the belief an Alzheimer’s patient presents. How do you mend a broken heart?

I found Sheila in the garden a few weeks ago. She had “eloped.” That is what the professionals call it when someone goes out alone and unsupervised. I looked for her, and found her and called out to her, and for a moment she looked the way she did years ago, before Alzheimer’s disease—happy, enjoying the flowers in her garden. For a moment, I allowed myself to think that it was all a mistake, that Sheila didn’t have Alzheimer’s disease, and as she walked toward me, I knew the reality that a part of my sister was gone and would never come back.

I have not been able to write for two-and-a-half years, but I have re-connected with my literary agent in New York, Claudia Cross, who thinks I have a beautiful voice. I have started writing again. There are many projects I want to work on.

As for those visits with Sheila, we cry a little, laugh a little, hold hands and sing together. I miss her terribly. I get up in the morning and I realize that the one person I have spent nearly 80 years with is gone, but I also realize that she still knows me, and she is pretty much herself during the day, and that she is happy.

I am going through a grieving process. No one has died, but a way of life has disintegrated. I think about the diagnosis, and I tell myself that I never thought this would happen. 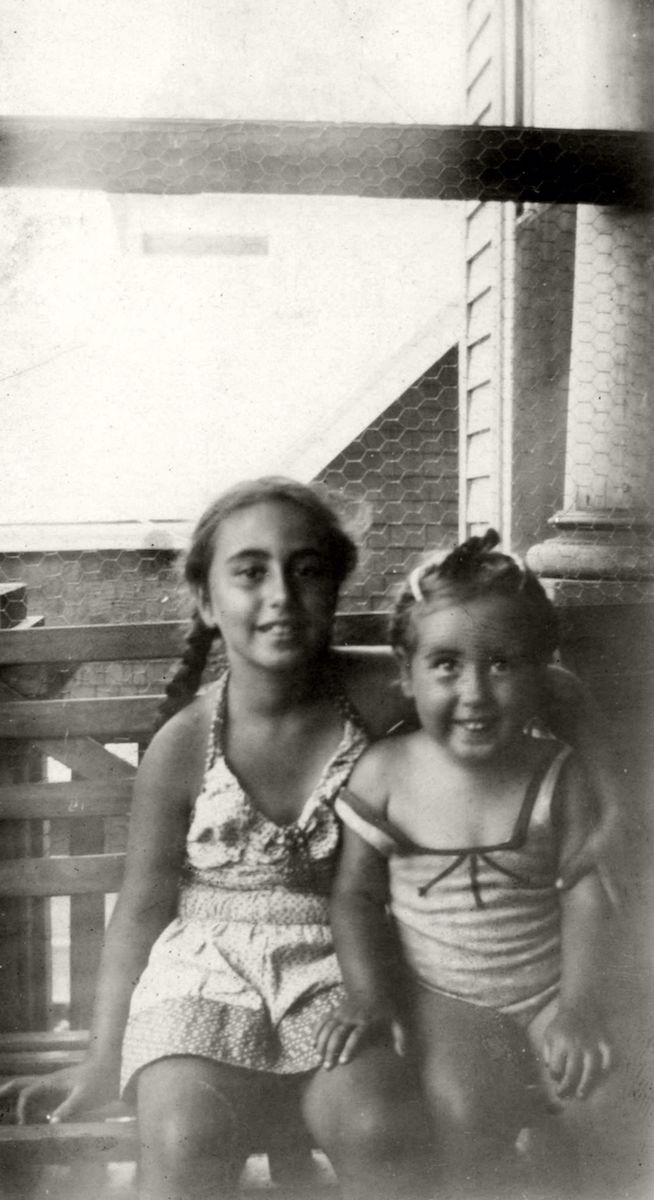 Sheila and Marilynn on the front porch on Sea Foam Avenue in Winthrop in 1944 (Photo: Harry Brass)

As for “The Food Flirts,” that was one of the happiest times in our lives when we enjoyed camaraderie, creativity and produced a television series on PBS, which was one of three finalists for a James Beard Award for Television Program on Location/Outstanding Personality/Host.

There were six of us producing a nationally-aired television series on a very modest budget. Everyone cleaned the bathroom and provided numerous cups of tea because we had to shoot during blizzards and some of the coldest March weather we had ever experienced. Who can forget driving behind a snow plow on the way to Provincetown?

We were “overnight” successes at the ages of 75 and 80, co-executive producers of “The Food Flirts.”

Our three cookbooks, which started the “heirloom” genre of preserving handwritten manuscript cookbooks and oral recollections of recipes, are pretty much sold out. You can still find them somewhere if you hunt for them.

I promise to answer any emails I receive, especially those that come to us through our website, thebrasssisters.com. I also promise to reply to all of the “friend requests” that have come our way.

I still want to hear from you about your adventures baking and cooking, and your family stories.

Thankfully, there is no “sell by” date for writers.

I will try to keep up my Facebook pages and we will laugh again about my Uncle Julius sitting down at the dessert buffet table at family parties choosing a piece of cake, a slice of pie, a cookie and a helping of fruit salad because it was healthy, or about “the tomato wars” between our mother, Dorothy, and her sister-in-law, Ida Katziff.

The memoir I’ve been working on, “Milk and Honey: Stories from a Jewish-American Life” (working title), will include references to Aunt Sadie, the child prodigy violinist and brilliant lawyer, who believed that compliments were “vitamins for the soul.” Aunt Sadie went around with the tip of the little finger on her right hand perpetually red because that was how she applied her lipstick.

You will learn the story of how our father, Harry Brass, proposed to our mother, Dorothy Katziff, and after she said “yes,” left her sitting in his car while he ran into Huyler’s, in Boston, for a Coke.

Somehow, I will try to communicate what it is like to grow up overweight and unpopular wearing wrinkled knee socks, but still be able tell the stories of so many home cooks and bakers whose stories might not have been told.

I will write about the drama professor who told me that I shouldn’t be on television because I was overweight and didn’t have the right image for television. I thought about him when I appeared on television with Sheila all over the country on book tours and when we sat at a table at the James Beard Awards dinner being honored for “The Food Flirts.”

I also want to re-visit “The Food Flirts.” I think it would be fun to let you know all about the secrets behind the making of “The Food Flirts,” maybe do some podcasts. When the pandemic is over, we might even visit a few chefs and celebrate the diverse culinary and cultural heritage of our country.

Please do not write off a short, plump, little old lady of almost 80 who lives in Cambridge, Massachusetts. She is still here, a bit emotionally battered, but still alive. 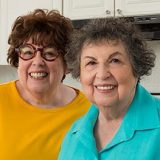