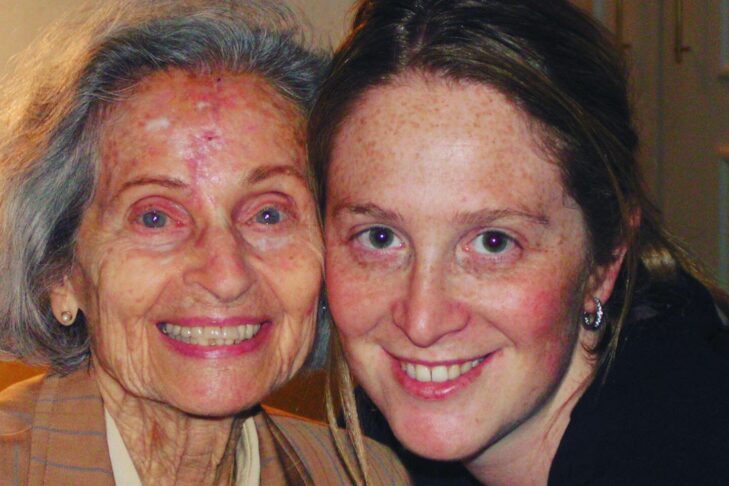 Like any good Jew, Ashley Stanley, 41, wants people to eat. She founded Lovin’ Spoonfuls in 2010 to rescue perishable food that would otherwise be discarded from grocery stores, food retailers, farms and farmers markets and deliver it, same day, to more than 160 nonprofits across Massachusetts serving people experiencing food insecurity.

The need has exploded since COVID-19 began: One in eight people in Eastern Massachusetts is expected to experience food insecurity in 2020 as a result of COVID-19.

Recently, she debuted a TED Talk, recalling her family’s history as refugees during World War II as inspiration for more action. She also has a unique perspective as a recovering addict, drawing on that experience to help others who are existing on life’s margins. She chatted with JewishBoston about her work.

What might readers be surprised to know about your day-to-day work?

Across the pandemic, we’ve rescued and distributed 2 million pounds of food just in the five or six months that we’ve been in this COVID-19 situation. Our waiting list has increased almost 250%. What I don’t think people recognize is that for the demographics that we work with, for the folks who were already suffering and for the folks who lost their jobs and fell below the poverty line within COVID-19, this is not ending for years. We’re going to see another 30% of our populations fall below the poverty line.

Let’s talk about your TED Talk. How does one get a TED Talk?

My grandmother passed away [at 100], at the beginning of COVID-19. There was no funeral, obviously. We’re living in a very precarious political time. It’s not a great time to lose your last generation of first-hand accounts of history, and that’s where we are. If you do not learn from your history, you’re bound to repeat it. It’s so cliché, but we’re living in a time where that’s happening. She and I were very close my whole life, and I think we were particularly bonded over what Judaism means. The history that I learned about the Holocaust and about my family was oral, it was verbal, it was from person to person. It was true storytelling. It wasn’t digitized. There wasn’t music behind it. It was straight up, “This is what happened.”

I think I learned Facebook in 2008 or something like that—I still suck at social media, but whatever!—and my first immediate thought, which is just so weird and I think now, so sad, was, “Wow! If there was social media and the ability to transmit information in real time in the 1930s, it would have never happened. Something could have been done.” And here we sit, and information moves fast, and oh, my God! I’m shocked that my first reaction was, “This is such a powerful tool to heal and unite and tell the truth,” and it’s just not doing that.

Can you talk a little bit about your trip to Austria with your grandmother and how that affected your worldview?

It was really conflicting. This was in 2004-ish, 2005-ish, and I had a little camcorder. I videotaped our trip, and I was actually watching the DVD the other night. And we debriefed after everywhere we went. We just checked in and had these little moments, and it was great. But I remember feeling so conflicted being there. I had never been. I had never thought that I would go. And I absolutely fell in love with it. And at the end of every day, I had this sinking feeling in my gut and in my heart. And there was this moment on the DVD where I said to her, “I love it here, but I hate it here.” You want to love it, but you can’t, because you know too much.

We walked everywhere. We saw where she went to school. We saw places she used to go. We ate the food. We just were in the moment. And for me, and I’m sure for her, it’s just haunted—walking down a street where the onslaughts happened. Was I standing where Hitler was standing? Was somebody brutally murdered on this corner? Who has lived here since then? And it was just emotional.

How did that trip affect your decision to pursue a food-rescue career?

I do think there’s an idea that we are responsible for each other, and if you are in a position to help, you must. This was just one way to do it. Other people are certainly pursuing things in their community that are probably far more influential and powerful than what we’re doing at Lovin’ Spoonfuls. But I think the point is to be in the world in a meaningful way. How do you work as a repair person?

In light of Yom Kippur, how will you spend the next year? What is your framework?

And I wonder how similar some of that thinking is to folks who were being rounded up [in the Holocaust], wondering what kind of rights they have as a human being. In no way am I comparing, but I am saying that we need to be very mindful of our history, and as Jews, we have an obligation to be vocal about equity, about humanity and about human rights, because that is who we are, and that’s always what we’ve been fighting for. Vote! We have a responsibility as Jews. We don’t get to turn our backs on that history.