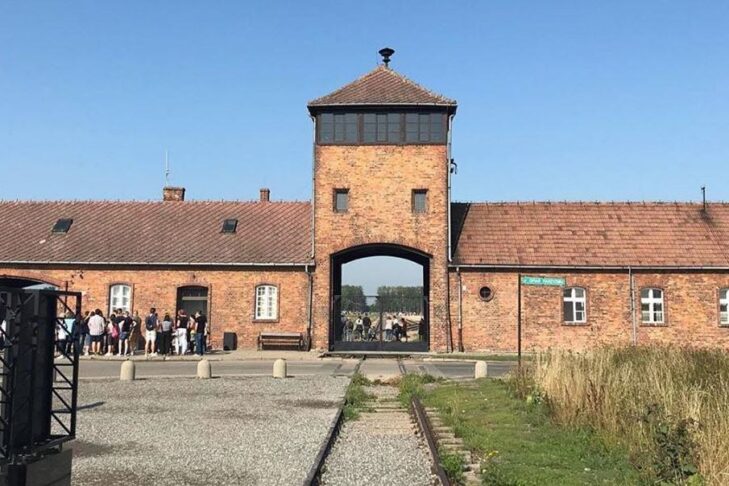 Last summer, I visited Auschwitz-Birkenau, the Nazi extermination camp in Poland that was liberated this week 75 years ago, on Jan. 27, 1945. All my reading and studies could not prepare me for the sheer scope of this place, where around 100,000 prisoners were held at any time (that’s nearly the population of Cambridge, where I live). Nor could I have anticipated the emotion of standing in the field beyond the crematorium where lie the ashes of over 1 million Jews murdered there—so many of whom we will never know by name.

Two weeks later, as a bookend to my personal journey across Jewish experience in central Europe, I stood in the graveyard of the Terezinstadt Ghetto in Czechia—liberated on May 9, 1945. Here there are some marked graves; Jews who died because of what the Nazis did to them, even after the liberation. Graves of people like Fritz Wohl and Martin Honig (May 18, 1945), and Franziska Kraus (June 14, 1945).

I thought of all these men and women, the named and unnamed, those buried alive and those whose ashes were cast into rivers, as this past Monday, leaders from Boston’s Jewish community gathered in the office of Massachusetts House Speaker Robert DeLeo to mark International Holocaust Day of Remembrance. Speaker DeLeo, along with Rep. Ruth Balser, presented a resolution to the New England Holocaust Memorial Committee and to the Consul General of Israel marking this solemn day and recommitting the House to combatting the global rise of antisemitism, as defined by the International Holocaust Remembrance Alliance.

Speaker DeLeo spoke personally and passionately about rising hate in our own time and right here in Massachusetts, including recent antisemitic events at a local college. Rep. Balser talked of her own family legacy, the lessons we Jews take from our experience in Europe and the urgency of putting meaning and action behind the phrase “never again.” On Thursday, a related resolution, also marking Holocaust Remembrance Day, was presented in the Massachusetts Senate by Senate Majority Leader Cindy Creem. President Karen Spilka spoke powerfully about her own family, including the aunts and uncles she never met because they were killed in the concentration camps, and her father who was an American liberator at Buchenwald.

I thought of those graves because they remind us that though we mark Jan. 27 as a day of remembrance, the Holocaust (or Shoah in Hebrew) did not end with the liberation of Auschwitz this week 75 years ago. Nor did it end with the conclusion of World War II as survivors continued to die in the months after, and then carried their trauma and physical wounds with them out of the camps.

No, the Shoah lives on in the lives and experiences of the survivors and their children, and in our collective responsibility to memory on their behalf.

And, sadly, we must grapple with the knowledge that, as Walter Reich, former director of the U.S. Holocaust Memorial Museum, wrote this week: “Antisemitism has returned, in part, because the general public’s knowledge about the Holocaust has diminished.”

no posts foundAnd so, in the coming weeks and months, as we continue to mark the events of this 75th year after the liberation, here in Boston we will gather for our community-wide Holocaust Commemoration of Yom HaShoah on Sunday, April 19, at 2 p.m. This year, as we must grapple with rising hate, bigotry and antisemitism in our own time, we are reaching out more broadly to the community of Greater Boston than ever before.

We plan to galvanize our entire community through the 75th anniversary of the liberation of the concentration camps and the 25th anniversary of the establishment of the New England Holocaust Memorial (NEHM), to raise awareness and stand united against antisemitism and all forms of bigotry and hatred. To ensure broad participation, we’ve formed a host committee of civic, political, academic and religious leaders, representing all segments of our community, co-chaired by Boston City Councilor Andrea Campbell; Josh Kraft, president and CEO of the Boys & Girls Club of Boston; and the Rev. Nancy Taylor of Old South Church.

We have an obligation to ensure the enduring memory of the Holocaust. Not just as a terrible period in our history but as a legacy and a warning for all time.

As I was reminded in Auschwitz, where the walls of one of the barracks display the enduring words of the Italian Jewish survivor and literary giant Primo Levi:

“It happened, therefore it can happen again; this is the core of what we have to say.”