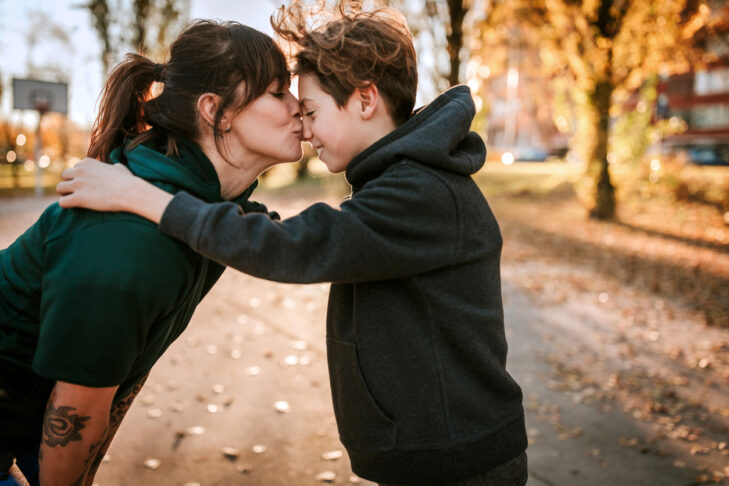 Today, my firstborn turns 11. I have a tween! It seems unfathomable. I still feel like a new parent, in some ways—not old enough to have a kid who uses deodorant (or at least needs to!), plays Minecraft and communicates with his friends on a Gizmo.

But he’s also in that funny in-between stage where he’s still a little dude who wears elastic-waist cozy pants and cuddles in bed in the morning. I know that will soon fade, and I’m bracing for it. Eleven feels like the last year where he’ll really be a true kid.

It’s also a tough one because, well, my mom’s gone. Nana would have called him first thing this morning. She would’ve known exactly what he wanted for his birthday. She would have lots of questions about his plans, his party, his day. This is the first family milestone that she’s missing. Can’t sugarcoat it: It feels pretty horrible, and I know it will be the first of many big days where I’ll feel a heavy, tight void. Any advice on that?

Anyway, every year on his birthday, I make a short list of things I’ve learned as a mom over the past year. A few:

Your kids won’t react to things the way you necessarily expect. People keep asking how Andy is doing in terms of my mom. He hasn’t really cried. He hasn’t expressed himself much about it at all. Finally, I couldn’t take it any longer. Had I raised a psychopath? I asked him what was going through his head. That’s when he told me that it still feels unreal, because he hasn’t been back to my parents’ house since she died and because we hadn’t had a funeral yet.

Don’t project. This spring, Andy didn’t make a certain baseball team. Several of his friends did. I was angry. I was worried that he’d flip out. I knew that if I were 11 and didn’t make the team, I’d become hysterical, convinced that I was a terrible athlete (well, I was…) and that my social life was over. I was bracing myself for my own reaction—but he didn’t care one bit. At 11, he’s getting to the age where he won’t make every team. He’ll encounter disappointment. Not everyone gets a trophy once you hit fifth grade. Clearly he already grasps that (even if it took me a minute).

No amount of storage containers from Target will turn a messy person into a neat one. Enough said.

He doesn’t always need to do something with a buddy. Camp, after-care, sports, community ed—I usually sign him up with a pal, because it’s more fun and because it gives him some security. But over the past year, he discovered comedy, and it’s something he does alone, for himself, that he totally enjoys. It helped that it was all remote, so he wasn’t lurking on stage in a crowd of strangers. But still: Once you hit 11, interests will diverge, and I want to encourage it. It’s nice that he has something only for himself.

Hang onto the quiet moments while they last. Cliché, but it’s true: Time flies, and each year of childhood goes by quicker than the last. Andy is closer to college than babyhood. So I need to get off my phone, off my laptop and actually appreciate that he still wants to watch movies with us, wants his feet rubbed (yes…), wants to be at home—instead of out with friends. That’s going to end, and it’s going to end soon. I need to extend those moments as long as I can, and that won’t happen while I scroll Instagram or text people. I need to be in the moment more, to treasure his waning childhood before he evolves into a teen. (On the other hand, I console myself with the fact that I also have a child who has another year of preschool and still needs help going to the bathroom.)

Parents of tweens: What have you learned so far? Parents who recently lost parents: Were your kids’ first birthdays without them really hard? How did you get through? Today is bittersweet. I’d love advice!