A barbecue plate at a La Esh (Courtesy photo)

“I don’t eat Jew food.” I was two-and-a-half months into my career as a restauranteur and chef the first time I heard it. Jew food? I didn’t even know what that meant. My place wasn’t Jewish, it was Israeli; more generally, it was Middle Eastern. I’d never thought of myself as a Jewish chef before that.

Still, I was offended when I heard someone had said that to a staff member of mine. It’s funny—my first response was to get halfway through an explanation about the difference between Sephardic and Ashkenazi cuisines. Then it dawned on me: This is Jew food…or, at least, food from a Jew. My dad, whose food I was cooking at the time, has been Jewish his whole life, too. His family had given up everything they’d had for their religious freedom. This food was part of that.

Being a Jewish chef is funny sometimes. People try to put me in a box, both inside and outside of my community. For non-Jews, there seems to be a need to correlate everything I cook with my religion or ethnicity. For Jews, it’s the opposite. There’s a feeling that I owe it to some of them to cook within the bounds of their particular style or dietary restrictions. They feel like my food is less “Jewish” if it strays too far from their norm. It was hard for a long time.

These days I’m on a quest to reinvent Jewish food. To reimagine food through the complicated history of the Jewish people and, moreover, this Jewish person. My mom is from the Buffalo, N.Y., area. Her family wasn’t Jewish, but they’re my family nonetheless; they’re part of who I am. When I cook my aunt’s food, to me, it becomes Jewish food. I see it through my lens. Through the lens of a chef who was told his food is defined by his ethnicity. I embrace that.

My newest spot, a La Esh, does barbecue. It does really, really dope barbecue. We season the meats with spice blends we know. We use fruit and vegetables we’re accustomed to. We make sauces and sides that feel right. And you know what I find myself thinking most days? I hope the guy who didn’t want a shawarma comes in for some pulled pork. I hope he loves the couscous mac and digs the astringency of the sumac in the pickled onions. You know what I’d tell him when he came back for seconds? I’d thank him for changing his mind and giving “Jew food” a chance. 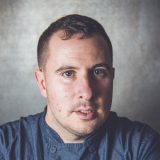