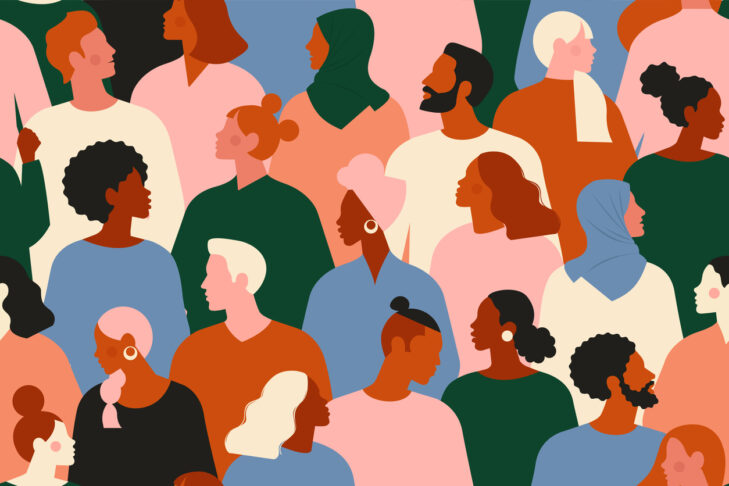 I do not consider myself a particularly brave person. As far as people go, I’m physically un-intimidating, a “wee nip of a thing” as my friend Helene would put it. I steer clear of danger in its many forms, thinking several steps ahead to prevent harm to myself or those I love. When I do fight, it’s primarily with words. As such, the ongoing protests and escalating police violence have me feeling, for lack of a better term, extremely nervous.

Of course, my fear is nowhere near the trauma and fear Black people must overcome in order to protest. However, watching protesters fling tear gas canisters back at riot police and topple statues of slave owners is incredible. The courage necessary to fight back against an oppressive system is staggering and admirable. So, when my partner, Olivia, suggested we attend a march in Brookline on Juneteenth, I swallowed my fear and agreed.

As soon as we arrived, I quickly realized I had nothing to worry about. The protest was well-organized and airtight, with organizers in neon vests passing out free masks and bottles of water. Olivia and I were already stocked up, carrying a first aid kit and extra water, and we stood six feet away while the leaders detailed their extensive plan to defund the Brookline Police Department. The march began at the newly renamed Florida Ruffin Ridley School and ended at the department building. As we began to gather on the lawn, I was heartened by the lack of police presence. And indeed, there was no need for their presence. Everyone stood peacefully, masks on, and as we began to walk, the crowd grew.

“This reminds me of Heschel,” Olivia said to me between chants. “Praying with your feet.” As we continued down the streets, I began to see what she meant.

Rabbi Abraham Joshua Heschel is one of the most well-known Jewish theologians and philosophers of the 20th century. He escaped Warsaw just weeks before the Nazis invaded Poland and marched in Selma with Dr. Martin Luther King Jr. According to his daughter, Susannah Heschel, Rabbi Heschel did not consider the march just a political demonstration, but a religious occasion as well. She writes: “He said it reminded him of the message of the prophets, whose primary concern was social injustice, and of his Hasidic forebears, for whom compassion for the suffering of other people defined a religious person.”

The Selma marches characterized the civil rights movement and stand as monuments of bravery in the face of horrific violence and hatred. Rabbi Heschel’s family feared that he may not return from Selma, but he took to the front lines in an act of compassion and courage.

I am, by no stretch of the imagination, comparing myself to Rabbi Heschel. Even in a huge crowd, I felt afraid of what we would find at the end of the march. Until, that is, we began to climb the hill on Harvard Street, and someone nearby paused a chant to say, “Oh, look behind us.”

When we arrived, I figured the march consisted of a few hundred people. By the time we got to the hill, the protesters spanned for blocks behind us, all standing in solidarity and support with Black people. My fear disappeared. It’s easy to feel afraid when confronted with one’s own smallness, but in a group, all shouting, “Black lives matter,” the enormity of the movement humbled me. In that moment, I felt the same incredible calm I feel when lighting Shabbat candles or celebrating holidays with my family. The process felt religious.

When he returned home, Rabbi Heschel wrote: “For many of us the march from Selma to Montgomery was about protest and prayer. Legs are not lips and walking is not kneeling. And yet our legs uttered songs. Even without words, our march was worship. I felt my legs were praying.”

And in the heat, amidst the organizers and the brave people around me, I understood what he meant.