I Stand for the Silent 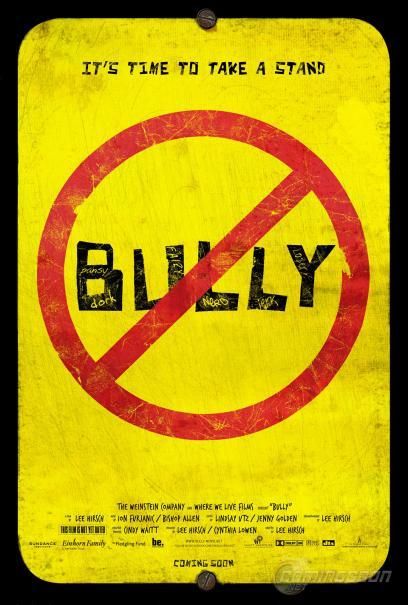 This week marked the exclusive premiere of the movie BULLY sponsored by BBYO, a Jewish teen movement. On Sunday afternoon April 15th, members and families of BBYO’s New England Region along with others from the Boston community came out for the screening of BULLY at the Landmark Kendall Square Cinema in Cambridge, MA. BBYO is the exclusive national partner in bringing this movie to Jewish teen audiences. We are partnered with Keshet, NFTY and Repair the World along with more than a dozen organizations across the country to ensure the screenings reach the largest number of Jewish teens possible.

Before the movie began, New England BBYO regional board members Madison Bader, Codie Magier and Eli Serota framed the movie along with help from Marissa Feinman, one of the program directors for New England Region. They asked members of the audience to stand up if they agreed with the statements about bullying, I stood up for almost every one of the questions and noticed that the entire room was filled with people who had similar experiences. It was truly amazing feeling the connection of being in a room of complete strangers all there for the common purpose of changing the world and putting an end to bullying.

BULLY follows the stories of five families from Iowa, Oklahoma, Mississippi and Georgia. From this film, I was able to witness actual bullying footage at schools, especially on the school buses. I noticed how the administration at these schools did very little for the families with children suffering from bullying. I saw the common theme that parents would go in and have a meeting with school officials, and they would say something like “I’m sorry this has happened to your child, kids will be kids.” In other cases, the school executives will promise that they will take action and then nothing gets done and the bullying persists. Since the majority of bullying happens to children at school I am appalled that the school officials aren’t doing more to protect the safety of their students.

Looking around the theater I noticed people would laugh and shake their heads in disagreement because they were disgusted by the lack of initiative the schools were taking on this critical issue. Also, many had tears in their eyes because they were sympathizing with the families that had to lose kids to bullying at such young ages.

The part of this movie that inspired me to make a difference was when they showed the story of the eleven year old TY Smalley who committed suicide after constant bullying. It made me sick to my stomach that a boy at the young age of eleven could be so affected by bullying. The important message I saw here was that bullying not only affects the family of the victim, but also his friends. Seeing Ty’s best friend sobbing at the funeral when he helped carry his friend’s casket made me more eager to stop bullying. It is not right for a boy to watch the burial of his eleven year old friend.  Just like in the schools in this movie, I have seen bullying in my school too. I have mainly seen people giving dirty looks to others and calling them names. It hurts me to know that some people can make judgments without even knowing a person. This film has changed how I will react to scenarios like this.  I will never judge others because you never know how one small word can affect someone else.

Immediately following the video, NER BBYO leaders stood up again to lead the audience in the discussion of what they will do this week regarding bullying. This week I will spread the awareness of the BULLY Project to everyone I know and try to have this film shown at my high school. I want people to act differently. I WILL Stand UP for the Silent.

BBYO is showing this film to Jewish teens because of our Stand UP for Each Other Campaign for Respect and Inclusion. This effort is focused on creating safe and welcome communities for all Jewish teens. It would be greatly appreciated if you joined the Stand UP for Each Other Campaign by helping BBYO and The BULLY Project raise awareness and reach our goal of one million teens!

To sign anti-bullying pledges and to get more information on BBYO’s work with “Bully” and BBYO’s Stand UP for Each Other Campaign, visit bbyo.org/bully.

Check out some teen responses from immediately following the film on here  or on youtube. Make your own response video and include an I WILL statement to show your support!