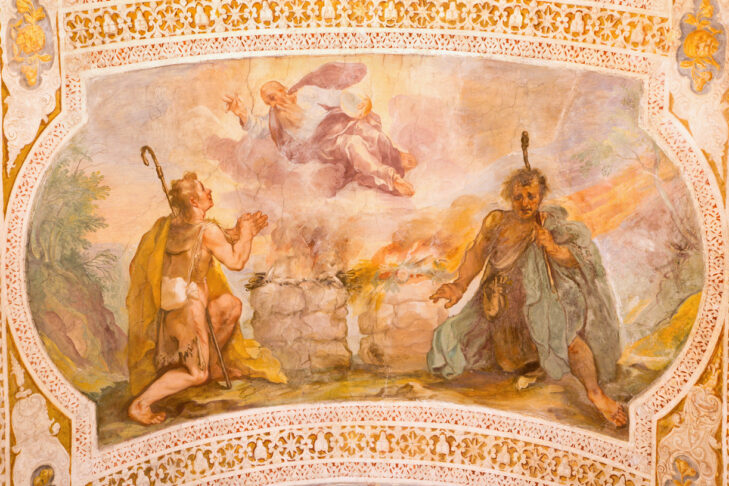 Rosh Hashanah, Yom Kippur and all the fall holidays have concluded.

But wait, the annual cycle of reading the Torah has resumed beginning at the beginning with Parashat B’reishit. In some ways, the first Shabbat after Simchat Torah has such special significance that it could be its own festival. After all, what could be more compelling than the creation story, or should I say stories?

So much happens in Genesis chapters 1:1 to 6:8. God creates the whole world over a six-day period: the land, the sky, the seas, the sun, the moon, the stars, vegetation, animals and, of course, man and woman.

Even time is created.

And of course the Sabbath itself is an essential part of God’s creation. We also read about the dramatic experiences of the first man and woman in the Garden of Eden, Eve’s temptation by the manipulative snake to eat forbidden fruit, God’s punishment and mankind’s banishment from their idyllic setting. Adam and Eve’s offspring Cain murders his brother Abel and is likewise punished by God though also protected as well. The Torah portion ends with God despairing of his creation in light of all the wickedness of humankind, and wondering if it was all a big mistake.

In the very last sentence, however, we learn that God admires a single individual, Noah, for reasons yet to be revealed. Despite God’s regrets, there may still be hope for humanity.

So in this initial Torah reading, kicking off the annual cycle, we are taken from the glory of God’s creation to divine regret and disappointment.

It’s a heavy way to begin the year, to say the least.

As I listened to the Torah reading this past Shabbat, I was struck once again by how relevant and psychologically sophisticated the Hebrew Bible is.

This never ceases to amaze me. Let’s start with the six days of creation. At the end of each day, God concludes that the creative aspects of the day were good, “tov” in Hebrew. How understated is that?

I mean, don’t you think that creating a whole world and all of its creatures should be characterized as “amazing“ or “awesome“ or “incredible”? I love the fact that God humbly labels his creation as “good.” On day six, the assessment is made that the whole of creation, including mankind, was “very good.” For those of us who tend toward perfectionism or who often feel that “good” might not be good enough, remember God and think again. Striving for the good is a wonderful standard to aim for as it is more likely to be attainable.

Another aspect of B’reishit that is so striking is the introduction of the concept of personal accountability.

Adam blames Eve for eating forbidden fruit from the tree of life and Eve blames the serpent for misleading her. God deals with each of them and holds them all accountable, including the snake! It’s a great lesson in fairness and personal responsibility, regardless of whether you believe that the punishments fit the crime.

But perhaps my favorite moral lesson in the beginning of Genesis has to do with the story of Cain and Abel.

When Cain kills Abel out of jealousy, and God confronts Cain, the latter replies with the classic rhetorical line, “Am I my brother’s keeper?” And of course, the answer is a resounding “yes!” Here we are at the outset of the biblical narrative and we are being taught what is arguably the most profound message of all time: as human beings we are indeed expected to be our brother’s keeper. This message resonates across the ages. As we speak, there are Haitians in dire need of basic sustenance, and Afghans by the thousands arriving to our country who require so many basic necessities and attention. As members of the Jewish people, we are also our brothers’ keepers both in Israel and wherever Jews are in need across the globe. And, of course, as Cain learned the hard way, on a very literal basis, we have a duty to support our own family and friends.

Throughout the biblical narrative, God continuously expresses disappointment with humankind, but never gives up on his imperfect creatures either.

After all, we were created in God’s image, a high standard to live up to. The world in its outset is deemed to be “good,” not perfect. What would life be like if each of us strived to achieve that attainable standard by at the very least being our brothers’ keepers? It’s a realistic goal, in particular if we also take a break on Shabbat to rest, reassess and get a weekly fresh start.

I can hardly wait for the continuation of the story in Parashat Noah next week!