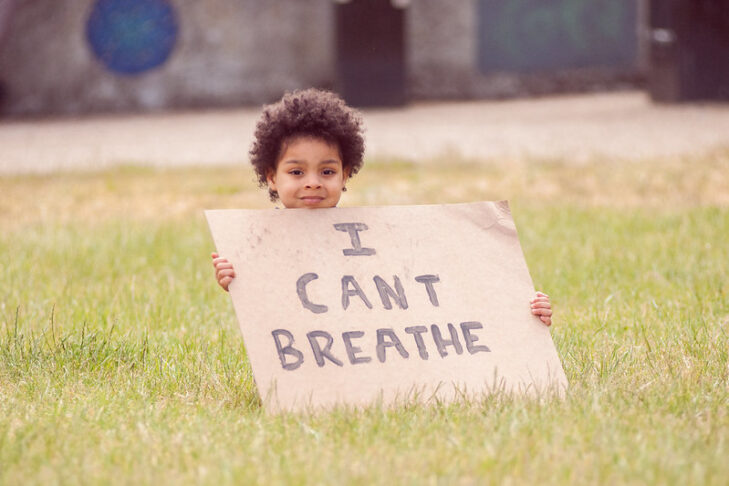 On Monday, May 25, Minneapolis police arrested George Floyd under the accusation of purchasing cigarettes with a counterfeit bill. Less than 20 minutes later, Floyd lay dead, his neck under an officer’s knee.

The latest in a long series of white cops killing unarmed black citizens, Floyd’s death has sparked outrage at the longstanding injustice in our country today. His last words, “Please, I can’t breathe,” have turned into the rallying cry of hundreds of protests across the country.

As white Americans, none of us have had to experience the reality of the systemic racism present in our cities, communities and even schools. And yet, in sitting idly by and doing nothing to fix the faults of our society, we are contributing to the very core of these issues.

Floyd’s death seems to be a turning point. People are furious. They are fuming. And they are tired of allowing the status quo to perpetuate racial differences throughout the nation. The time has come for real change.

In large crowds of passionate protesters, there is a disproportionately large amount of youth. Young African Americans are crying out at the unjust system they must face. Young white Americans are using their privilege to stand by their brothers and sisters and push the establishment to meet their demands. In light of the government and police responses to these protests, here are our voices.

“The George Floyd incident and the protests after have shown how America really is, and how poor people, especially African Americans, live at the bottom, subjugated by politicians and police. While most people disagreed with the use of force by the police officers, many people have denied this has anything to do with race. Yes, it’s true that a similar incident happened to a white man before, but this happens to black people all the time. Black people are more than twice as likely to be killed by police. Now, there have been riots that everyone has seemingly condemned, saying we need peace. But the whole point of a protest is that those in power can’t agree with it. These people are protesting the system that allows cops to murder and get away with it. They want the system torn down. Of course, people at the top of the system don’t want that to happen. That’s why even when protests were peaceful, like with Colin Kaepernick, people still thought it was disgraceful. The Minneapolis police force is led by a man who once called Black Lives Matter a ‘terrorist organization.’ The chiefs of plenty of others have spent money defending those who have brutally murdered unarmed African American citizens. So while not all cops are racist themselves, police chiefs are breeding racism in their ranks and teaching it to their officers. We can’t let this happen anymore, and it’s time we tear down the fake America to build a real one where citizens of all races can benefit.”
—Colin Kerrigan, 18

“The brutality of the police response has not gone unnoticed. Thanks to social media, younger Americans, like myself, have been able to spread awareness, organize protests, raise money and inform themselves where they might have otherwise gone on being ignorant of the injustice around them. It’s time that there is change, and it’s important that each and every one of us does whatever we can to pursue sweeping reform.”
—Victoria Andreev, 15

“The use of police force in a protest against police force is ironic, and it goes to prove the protestors’ point. Although rioting and looting is bad, it’s been conflated to quash the movement entirely. Calling in the army and essentially suspending habeas corpus goes against the First Amendment’s protection of peaceful assembly, and the mayors, governors and the president should be held accountable if they choose to exercise that. Protests are good in the sense that they are fighting against police brutality. That being said, there needs to be a list of demands to fix the issue, which they don’t have because they’re not centralized. No figure is leading them.”
—Eyal Jackman, 18

Note: The NAACP has released a statement laying out a clear list of demands to be met. There has not, however, emerged a clear leader as a face for the movement, which many people believe would only serve to strengthen it.

“It saddens me that racism and discrimination still exist today. The fact that people are treated differently simply based on the color of their skin is sickening. The fact that Floyd kept saying, ‘I can’t breathe,’ while the cop was on his chest, until he died from lack of air, is truly disturbing. It’s disturbing that people think they can do whatever they want because they are white.”
—Nikol Lupu, 16

“Systemic racism has been rooted in our democracy from the beginning of its foundation. The American fathers were slaveholding white men and built our system on the hopes that those slaves and property would be passed to other white land-holding men. While much about our system has changed, including the original documents themselves, systemic racism has yet to disappear. The inequalities that black people face in America have lessened but are too deeply ingrained to fully disappear. Inequalities in the forms of housing and school systems came from an original will to group African Americans into ‘hoods,’ ‘projects’ and districts that wouldn’t disrupt the high-priced, gentrified housing and better school systems of the predominantly white sections. This is what has given African Americans fewer opportunities to thrive. Not only that, but there are still many outwardly racist groups in America and around the world, like the KKK. With these ingrained systems of inequality, coupled with the racism in the present day, many African Americans found the death of George Floyd to simply be a visual reassurance of what black people still have to face. This police brutality, which gained traction in the media and on social media, was only one of many cases of police murdering black people. It was not the first time that black Americans had seen police over-exerting their powers of force and will on black people, while many white criminals have not gotten the same harsh treatments or even death. The murder of George Floyd was a case that gained traction fast, and was therefore able to bring many like-minded people and activists together just as fast. These protests for the Black Lives Matter movement are the same protests that happened during the civil rights movement. Black people are simply fighting for what was not fully achieved before: equity in which the whole system changes.”
—Meredith Lapidas, 18

“It saddens me how many people have been standing against the protestors, who are fighting for their right to be alive. This is not just a black issue, or a people of color issue. This is an American issue, and people all around the world can see that except for us. We all have a responsibility to our fellow members of society to make sure law enforcement cannot continue to abuse their power. If a police officer believes that feeling a twinge of fear is justification enough to take the life of a human being, then that person should not be in a position of authority and should not be given the right to harm people for simply seeming threatening. There needs to be a stop to this. There needs to be more education for police officers on ethics and on humanitarian issues, such as the major divide of privilege and the feelings of safety because of race in this country. There needs to be higher standards for who can become a police officer. There needs to be much stricter and objective policies made for what situation justifies shooting and what should be done if these criteria are not met. We need to make law enforcement a force of protection, not a source of fear in our country.”
—Edita Kaplun, 19

Our voices make up a large part of Jookender’s community. As a nonprofit dedicated to using shared history, language and culture to meaningfully and memorably engage its families and their children, Jookender is focused not only on its own members but its communities as a whole.

As a Jewish community, Jookender understands the generational struggles that result from systemic oppression. From Roman persecution to Czarist Russia’s May Laws and the horrors of Nazism, Jews have faced wave after wave of antisemitism. Although many issues remain to this day, the systemic oppression against individuals based on their race/ethnicity is a problem suffered most by black Americans. In the spirit of the Jewish concept of tikkun olam, repairing the world, this group of Jookender’s social entrepreneurship internship is proud to be donating the money it has raised over this past year to the Equal Justice Initiative.

As young Jewish Americans, we will continue to do whatever we can to educate ourselves, spread awareness and actively fight for social justice reforms that have gone ignored for far too long. We hope you will join us in doing the same.

Click here for a list of other organizations to donate to. For ideas on how to better educate yourself and support the Black Lives Matter movement, please check out this incredibly informative article.