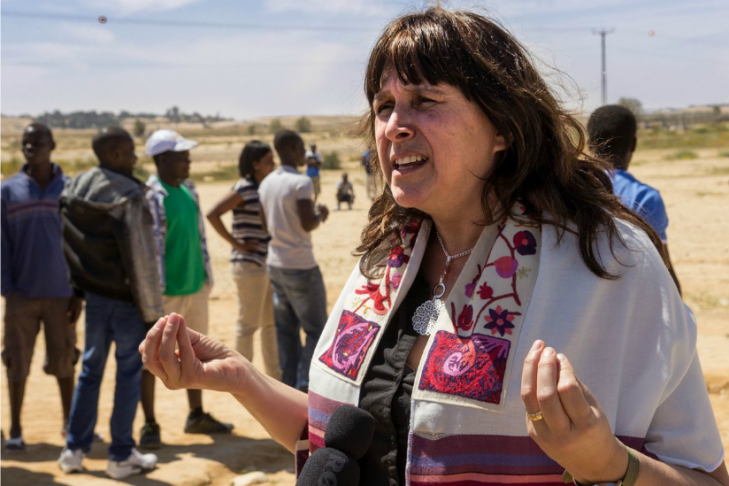 Rabbi Susan Silverman, an Israeli activist best known for her fight for equal prayer rights at the Western Wall as part of the Women of the Wall, has turned her attention to the issue of African asylum seekers in Israel. She founded a social movement, Miklat Israel, to assist asylum seekers in Israel however they can, even if it means breaking Israeli law.

israel360/JewishBoston: Rabbi Silverman, tell us a little about your movement and why you’re speaking out on the deportation issue.

Rabbi Susan Silverman: The aim is to respond to the crisis that we find ourselves in, because our government has decided to deport thousands of African asylum seekers. And we know that when they are deported, they are not able to stay in the countries that they are deported to, and that they find themselves back on the refugee trail. So it’s not that they’re deported to places that are necessarily bad places or dangerous places in and of themselves, but they’re not landing somewhere where they can stay. 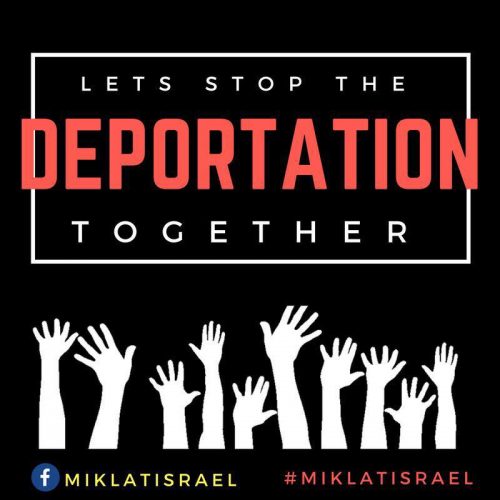 israel360/JewishBoston: Israel’s Ashkenazi chief Rabbi David Lau said recently that helping those who are already citizens of Israel, including Holocaust survivors, people with disabilities, and people living in poverty needs to take precedence over anyone else we help, essentially was his message. But the most frequent commandment in the Torah upwards of 30 times, I believe, is to welcome the stranger in our midst. Do you believe that Israel can strike a balance between being a small country with limited space and resources, but still remain true and open to refugees and asylum seekers in the spirit of that commandment?

Rabbi Susan Silverman: Listen, I am certainly no economist, but this is something I understand quite clearly from people who are economists, which is that economies are not like an actual pie, where you’re dividing things up, tinier and tinier, right? Economies are things that grow and expand with the people in them. In Israel, the start-up nation, we know that better than anybody. We’ve expanded like crazy. We have room for everybody, and pitting poor Israelis against refugees? I really find that to be very narrow and also quite perhaps deliberate. Why would we pit poor Israelis against refugees? Why are we not thinking broadly about a society in which everybody can be lifted? And to create that kind of dichotomy, which is a made-up dichotomy is to say, “I want an excuse to kick out these Africans.” And here I can couch it in the language of compassion. When in truth, it’s from a place, I believe, of fear and of xenophobia.

israel360/JewishBoston: Some estimate that there are more than 65 million refugees worldwide in 2018. How many can Israel, a country with severely limited space and somewhat limited resources, actually help?

“It’s not on us to heal everything, to fix everything. But we need to do our part.”

Rabbi Susan Silverman: That is a debate that needs to be had. The reality right now is that we’ve built a wall, we have who we have, nobody else is coming in. So we can have that discussion and from my point of view, I want our question to be, “What more can I do?” Not, “How little can get I away with?” And the question that the Israeli government has been asking so far is, “How little can we get away with?” When the question, as Jews, needs to be, “What more can I do?” It’s not on us to heal everything, to fix everything. But we need to do our part. And that’s all we’re demanding is that Israel does our part according to international law. International law, by the way, that we helped write after the Holocaust on refugees.

“Secular and progressive Jews are quoting God’s commandments and our ultra-religious and right-wing are quoting Pharaoh and Haman.”

israel360/JewishBoston: How does this issue break across party/religious/socio-economic lines in Israel?

Rabbi Susan Silverman: Well, first of all, on a positive note, we have thousands of people, including in kibbutz communities across the nation, who have said, “Count me in. I want to hide refugees if, God forbid, it comes to that point.” There are people from the territories, tons of people who are volunteering to do this, too. So people who never agree on anything politically are all together on this. In terms of party lines, it’s so complex in Israel because there’s left and right, but there’s also religious and secular. I’m not secular. I’m a progressive, liberal, religious person. But we see the secular and the progressive Jews quoting: “We need to take care of the stranger, take the stranger as a citizen among us, remember that we were strangers in a strange land.” Who has Bibi Netanyahu and Eli Yishai and Miri Regev quoted? They have quoted Pharaoh. What did Pharaoh say about the Hebrew slaves? They are growing in number and they will join our enemies. That’s exactly what these politicians and religious leaders, like Eli Yishai, have said that there’s this people among us who are going to grow in number and that growth is a threat to us. Who else have they quoted? They’ve quoted Haman. What did Haman say about the Jews? “There’s a people among us,” he says to Ahasuerus, “Oh, King, there’s a people among us who does not follow your laws.” What did Eli Yishai say? That the asylum seekers are criminals, that they do not follow our laws. Which is an outright lie. In fact, if you look at the statistics, the crime among these desperate people is half the national rate of Israeli citizens.

israel360/JewishBoston: The government established an April 1 deadline by which this group of single African men must accept a payout—$3,500—and be deported to a country in Africa—not their own, initially—or be detained and forcefully deported. Can you talk a little more about the process as you understand it?

“Our sense is that people are going to choose prison.”

Rabbi Susan Silverman: They can choose either “voluntarily leave” with this payout, which, by the way, they don’t have that money very long once they land and they’re back on the refugee trail. They’re back to desperation. It’s not like they can start a new life in a new country.  And it’s either that or go to prison indefinitely. Our sense is that people are going to choose prison because they see that we’re not stopping and we’re going to fight this to the end, and we’re not going to let them stay in jail. I think fewer people will take that “offer” to leave the country because they know what awaits them. I’m imagining their moms in Eritrea, in Darfur, hearing the news, watching, finding out whatever they can, just terrified for their child. I can’t even imagine my child being far away and at risk, and having the one country that’s kept them safe talk about deporting them. As a mom, it’s unbearable to me to try and think what these women are going through from far away.

Find out more about the Miklat Israel movement by visiting its Facebook page. Listen to the full podcast here.