The Boston Jewish Film Festival is right around the corner – November 3-14. There are a couple screenings of particular interest to interfaith families, or those interested in interfaith and/or intercultural issues.

The first is the film Me and the Jewish Thing, a documentary about, and by, Ulrik Gutkin. 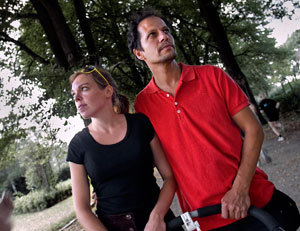 Through conversations with his wife, Signe, we learn that Ulrik, who is Jewish, and Signe, who is Christian, do not share the same opinion about the need for circumcision. Ulrik, a 4th generation Danish Jew, feels strongly that their son should be circumcised. Signe, however, sees circumcision as a “medieval” act of mutilation and cruelty.

The film covers four years of the couple’s life, spanning from the last weeks of Signe’s pregnancy, through the first few years of their son Felix’s life. Interwoven with Ulrik and Signe’s ongoing debate, we learn about Ulrik’s Jewish history, his attachment to his religion and culture. In addition to questioning the physical purpose of circumcision, Signe wonders why it’s important to Ulrik to become more Jewish, make a film about this Jewish topic, when Judaism wasn’t a big part of Ulrik’s life prior to having kids.

Ulrik struggles to articulate why he feels strongly in favor of circumcising their son. As it becomes clear to him that their son won’t be circumcised, he looks for other ways to impart Judaism on Felix, though he and Signe again feel differently about those efforts.

While this documentary demonstrates a difficult issue that many interfaith couples are faced with, we at InterfaithFamily.com encourage couples to discuss potential conflicts in advance. We have plenty of resources about circumcision, if that’s the specific topic in question; we’re also offering an online group for interfaith couples to learn how to make decisions while still respecting both partner’s religion.

Screening with Me and the Jewish Thing is a short documentary called Michal, Matthias and the Unborn Child. Unlike Ulrik and Signe, Michal, an Israeli Jew, and Matthias, a Christian German, start discussing what their religious life would look like were they to have children together in the future.

They visit a Jewish day school in Berlin, where they live, and meet with another local Jewish Israeli and German couple who are raising their children as Jews. Michal and Matthias are able to see these children, and their father, who is not Jewish, participate fully in lighting the candles, making blessings over the wine, and sharing a Shabbat dinner together.

This process is open, respectful, and proactive. We definitely approve of their early dialogue!

See Ulrik and Signe, Michal and Matthias (along with a third short film, Hasan Everywhere) on Thursday, November 11 at 4:15pm at the Coolidge Corner Theatre.