We are excited to introduce a new weekly feature to JewishBoston.com: Four Questions. Molly Parr will be meeting interesting people from our community and introducing them to you right here every Monday. She’s already lined up conversations with writers, chefs, politicos and more. But first, we thought it would be helpful to get to know Molly, so we kick off the column with Molly interviewing herself.

Why is this column different from all other columns? 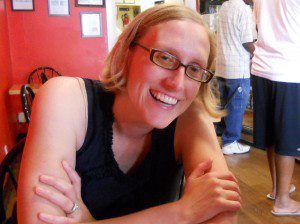 Ah. I’m Molly Parr. You may have read my words (sometimes under my maiden name, Shaffer) in Jewish publications including The Manhattan Jewish Sentinel, The Long Island Jewish World, The Jewish News of Western Massachusetts, The Jewish Advocate, The Jewish Journal Boston-North, The Jewish Voice & Herald of Rhode Island, InterfaithFamily, JewishBoston.com, or my personal blog, Cheap Beets. Basically, if you’re a Jewish editor, I’ve probably covered an event, written a review, or interviewed someone on your behalf. I’ve done the whole day school thing, Joint Program with the Jewish Theological Seminary and Columbia University for college, with a quick stint at Machon Pardes in Jerusalem in between all that. Despite all this, I ended up with a husband who was an altar boy until he was 18. Go figure.

You must have a life other than writing for Jewish publications. Right?

Oh yes, I live in Lower Allston with my husband Rich and our cat, Rooster. I work at Boston University in the development and alumni relations department, which is the first place I’ve worked that doesn’t have “Hebrew” or “Jewish” in the name. Seriously. My job, anyone in my family will tell you, is made for me. I’m a prospect researcher, which means I write biographies about donors so that the president and our deans know exactly who they’re talking to when they walk in the room.

I’m also working on a master’s in gastronomy and food studies at BU. In my downtime I write my food blog where I offer recipes and stories for navigating a mostly vegetarian kitchen during this tough economic time.  I love cooking, and if you called me on a Saturday night, I’d most likely be watching a movie I’ve DVR’ed off Turner Classic Movies.

Who do you hope to interview?

Pretty much anyone interesting with some sort of connection to Boston’s Jewish community. To start, in the next few columns I’ll be interviewing an advice columnist, a personal chef, a press secretary, and an ethnomusicologist. If you are reading this and know someone, are someone, or have an idea for a future column, please, please, please drop me a line. The format is probably pretty obvious to you by now: Four Questions. The first three will be pretty serious, and they’ll allow you to talk about yourself, your new book, your new business, your new album, whatever made you contact me or my editor, David Levy. And the fourth will be something offbeat, personal or just plain silly, just to keep things interesting.

On that note: If you could ask Four Questions of anyone, who would you ask?

My maternal grandfather. He passed when I was barely two years old, so my only memory is of him bouncing me on his knee. What I’ve learned from those who knew him was that he was a Talmud scholar, a Classics professor, a linguist, and a soldier in the Underground while my family hid in Provence during the War. He had a Ph.D. in classics long before he was 30 and received a second Ph.D. in agriculture from the Sorbonne. He and my grandmother had a silkworm farm during the war; while he was off fighting, my grandmother tended to the farm. To be honest, I have many more than four questions for him. But that would at least get things started.