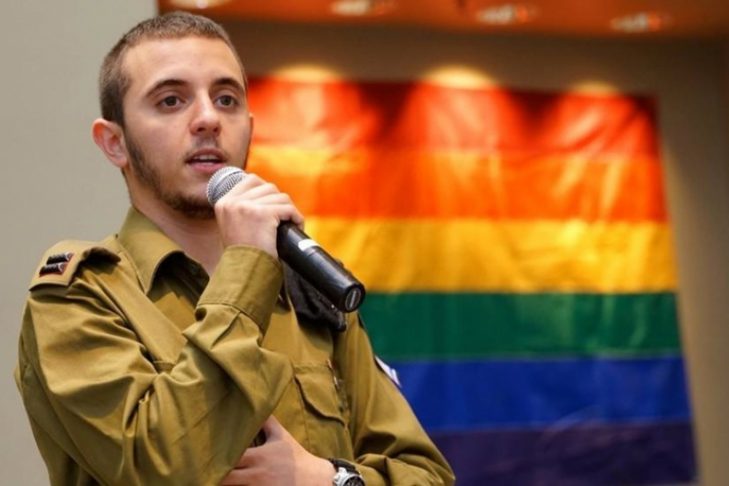 On the last day of his officer-training course in the Israel Defense Forces (IDF), Lt. Shachar Erez came out for the second time as a transgender man. The first time he was 16 years old when he told his family and friends on his kibbutz that he was a man. But then, like all Israeli 18-year-olds, he was drafted into the IDF. He reluctantly enlisted as a woman—his gender assigned at birth—and went back into the closet. “I didn’t know how my transgender identity would affect my service,” he said. “And I didn’t know much about the military and the military didn’t know much about trans people.”

On an American tour sponsored by the Israel Defense Forces and the Israel Ministry of Foreign Affairs, Erez was recently in Boston to share his story and advocate for LGBT rights in the military and beyond. He has appeared in synagogues, schools and Jewish organizations. He told JewishBoston that he has particularly enjoyed meeting American teens. “Speaking to all young people, not just LGBT youth, is the most important part of my trip,” he said. “Eighteen is the age when you are open to new ideas. It’s an age when you ask yourself questions about identity. It’s the right time to speak with these kids.”

Erez, who was raised on a kibbutz in northern Israel, knew he was transgender from an early age. At 2 he begged his parents to cut his hair short, and at 4 he refused to wear dresses. His parents not only accepted his choices, but also were proud of him when he came out as transgender. Yet during his first year in the IDF he jettisoned his male identity and concentrated on becoming the best female soldier he could be. “But it came to a point where I could not ignore my situation,” he said. A year later, his commander—a woman—was instrumental in helping him craft a speech in which he came out to 60 of his fellow officers. “On that day I started my service as a man,” he said.

Erez is now 23 and has over 200 soldiers under his command. In addition to his military duties, he’s also an advisor to the IDF’s gender affairs office. Despite his initial fears about serving in the army as a transgender man, he has found the IDF to be welcoming and supportive. “I was amazed that it didn’t matter if my commanders were younger or older or secular or religious,” he said. “All of them treated me with respect and judged me for my professional performance. I have never felt different in the IDF.” To underscore his point, his story is prominently featured on the IDF website, and the Israeli military’s health insurance covered the cost of his transition.

But telling his story was not always a positive experience for Erez. He felt the first Israeli newspaper article in which he was featured misrepresented his experiences and was full of factual errors. But his disappointment was compensated by the fact that after reading his story transgender kids contacted him, some of them coming out for the first time. “I realized the story was something bigger than me,” he said. “We were taught in the officer-training course that we have a responsibility to our community. The IDF is not only about being a commander in the battlefield, but also about being a leader to the people around you. Today I look back and know that other transgender soldiers don’t have to go through what I went through.”

Erez has served in the IDF for five years—three years beyond the two-year requirement. Hindsight, he said, has allowed him to see a clear connection “between being in the IDF and being trans. We’re fighting for the same shared values of having equality and the same basic human rights.”