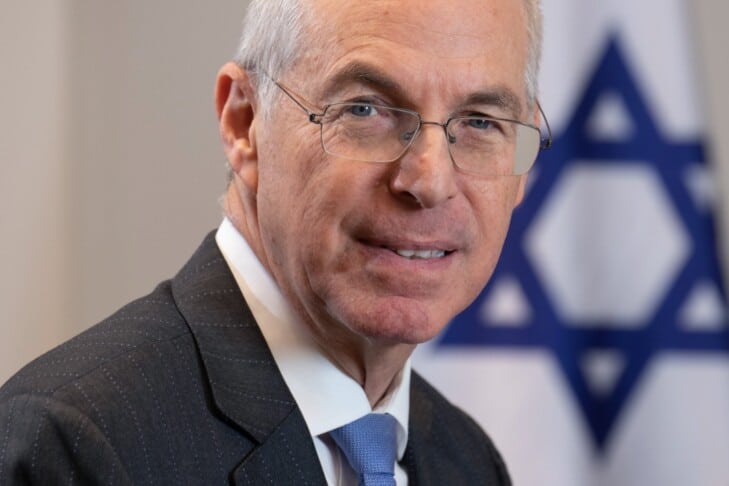 Israeli Ambassador to the U.S., Michael Herzog, spoke recently at the University of Maryland, a program sponsored by the school’s Gildenhorn Institute for Israel Studies. The speech was the kick-off program of a year of events honoring the 75th anniversary of the establishment of the State of Israel. Herzog is the brother of Israeli President Isaac Herzog. He has been ambassador for a year, and since 1993 has been involved in Israeli-Palestinian negotiations. Herzog also served as a brigadier general in the Israeli Defense Forces.

“Israeli has no closer friend and ally than the U.S.,” said Herzog. “We have shared values as well as an affinity between our peoples.”  Herzog noted that when President John F. Kennedy met David Ben Gurion, Israel’s first prime minister, JFK said, “What can I do for Israel?” Ben Gurion’s response: “Be a great president for the U.S.”

Herzog acknowledged that the Middle East has major challenges. “I underscore the importance of our alliance with the U.S. We are like-minded people. Russia and Iran present challenges, as does the war in Ukraine.” He added: “Israel is the only country to establish a field hospital in Ukraine. We have treated thousands and have offered significant, nonlethal assistance.”

“The Middle East is in turmoil, with societal as well as economic crises,” he continued. “The Arab Spring turned into a winter. Iran and its proxies threaten the area’s stability. Al Qaeda and ISIS are running rampant.” The turmoil is exacerbated by conflicts between Sunni and Shiite Muslims, and religious vs. non-religious Muslims. “Some want to take the region backwards,” said Herzog. “Iran and its proxies are anti-Western, anti-Israel and antisemitic. There is a strong drive for nuclear and regional ambitions.” If Iran gets a nuclear weapon, he warned, “then you’ll have a new Middle East.”

Herzog addressed domestic unrest in Iran, which he called “a milestone in this region.” The Iranian government, he asserted, has lost touch with their population. Protests erupted after the killing of 22-year-old Mahsa Amini, who died after being taken to a re-education center for not abiding by state rules regarding women wearing hijabs. At least 50 other people have been killed. “Seventy percent of Iranians are under 30 and don’t subscribe to the ideology of the regime,” said Herzog, adding, “although a successful insurrection would take years.”  He believes the Iranian regime will eventually fall, “but I hope it’s before they acquire nuclear weapons.”

Herzog pointed out that there is also a significant Iran-dominated population in Lebanon, where 75% live in poverty. That and the unrest in Iran, said Herzog, “could be a huge opportunity to widen the scope of the Abraham Accords” so far signed by the UAE, Bahrain and Morocco. “There’s a cold peace between those governments and Israel,” said Herzog, “but warm relations between the people.” Jordan is also interested, and there have been meetings with Egyptians.

“The Israel-Palestinian situation is not in a good place. There is an uptick in terror attacks against Israelis,” said Herzog. Nevertheless, he would like to see the Palestinians join the Abraham Accords. Herzog has played a key role in negotiations with Palestinians, Jordanians and Syrians for 25 years. “Peace has not been achieved, but not through lack of trying,” said Herzog. “There are religious, historical and psychological conflicts. We must keep the window open. I would hope the Palestinian leadership would see the benefits.” However, he noted, “The UAE recently sent a plane full of vaccines to the Palestinians, and they sent it back.”

“We refuse to receive it because it was coordinated directly between Israel and them [the UAE],” said Palestinian civil affairs minister Hussein al-Sheikh. This happened twice.

Herzog described the recent maritime agreement with Lebanon as “a complex agreement which defines maritime issues and rights regarding underwater gas fields,” which he hopes will lead to “more stability in relations with Lebanon.” Herzog believes this agreement represents “tacit Lebanese recognition of Israel.”

Herzog’s brother, the President of Israel, was recently invited to speak to both U.S. houses of congress as part of the celebration of Israel’s 75th birthday. “Israel is a success story, perhaps an imperfect democracy,” noted Ambassador Herzog, adding, “I have yet to meet a perfect democracy.”

“I have great hope looking ahead,” he added. “The U.S. is a true friend of Israel and the Jewish community…“There are forces who want to bring about stability and well-being, and those who want to take the region backwards.”

As for the Abraham Accords: “The Palestinians no longer have veto power over all issues. Arabs are now stakeholders and will have to play a bigger part in Israel/Palestinian negotiations. I hope with time the Palestinians will understand that peace will benefit them as well.”