On Monday, June 13, Noga Erez, a 31-year-old singer-songwriter from Caesarea, Israel, took the stage at Roadrunner, Boston’s brand-new concert venue. With a dreamy quality to her voice and jazzy electro-pop vibes, Erez is a fitting opener to accompany Swedish singer Tove Lo on her current U.S. run.

Erez has something very Billie Eilish about her, but without the nightmares and openness about insecurities; instead, Erez sings with a degree of self-assuredness that only Israelis seem to have. She tells tales not of lovers lost, but about “the need to wake up because crazy things are happening everywhere today.” Despite growing up around conflict, her lyrics aren’t political at all.

Erez kicked off her set with the peppy “End of the Road,” a single from her second album “KIDS.” She also performed a new song, “NAILS,” which came out only two weeks before.

Known for her artsy music videos, her live vibe is very understated and unassuming. She doesn’t need anything crazy—just her two-person band behind her: Ori Rousso (sampler, synthesizer) and Ran Jacobvitz (electronic drums, percussion).

Bouncing around the stage, Erez embodied the words printed all over her lime green oversized suit—“GROWNUP KID.” Her movements were just like that—a grownup kid jumping around a playground, but if the playground was basically an empty, 60-foot stage. Roadrunner’s vastness had no hold; this could have been a basement show, not a packed venue. 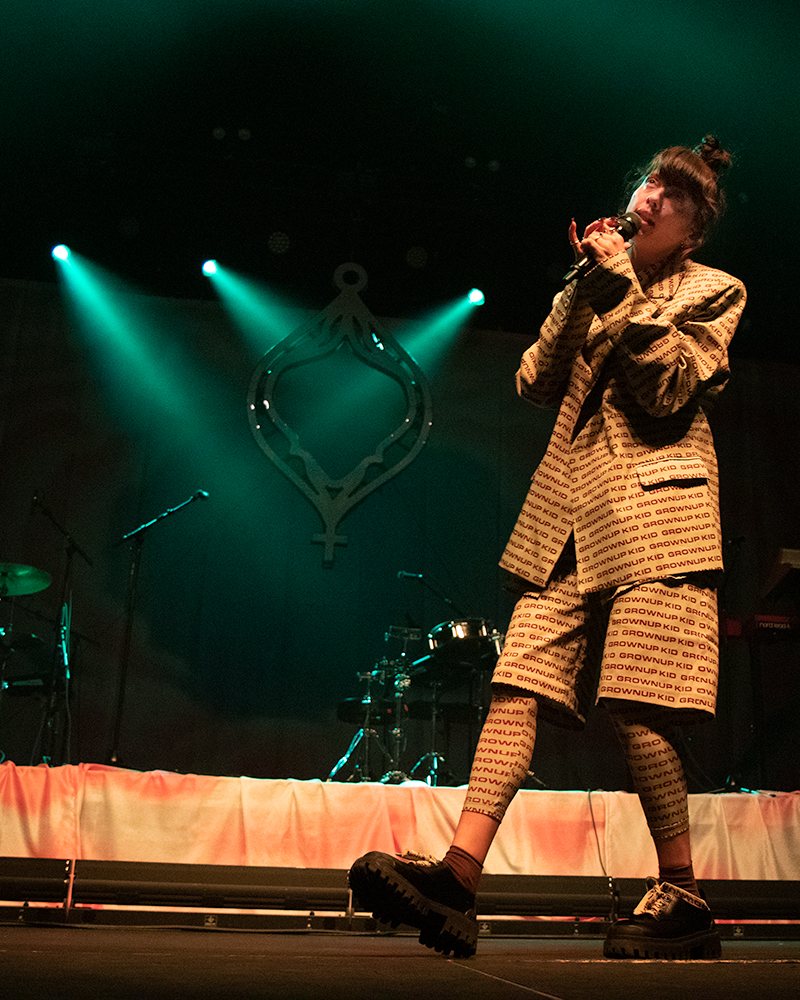 Roadrunner, which opened in March 2022, is Boston’s newest music hall: a 3,500-capacity The Bowery Presents (Royale, The Sinclair) venue in Brighton by Boston Landing. Twenty-five cents from each ticket goes to The Shout Syndicate, a fund started by music industry veterans to raise money for youth arts projects in Greater Boston.

As people peppered in during Erez’s performance, they started bobbing, dancing and clapping along, drinks swaying in their hands.

“I come from afar,” she said as she closed out the set. “As we all do. We are all aliens.”

Cheers erupted at that sentiment, and I wondered if they would still be cheering if she said where she’s really from.

Tove Lo fans, clad in sequins and short shorts, continued to pour in after Erez left the stage, with no idea of the pregame they missed out on.