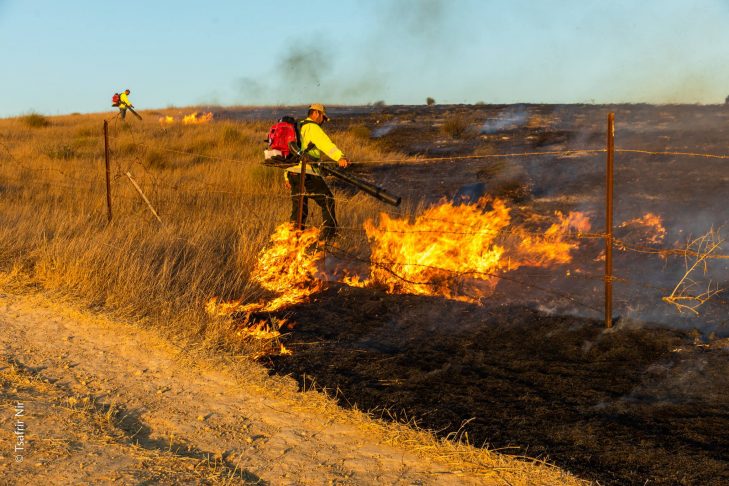 Since March 2018, Israelis living near the Gaza Strip have been subjected to rioting, bombings, stone-throwing, Molotov cocktails and attacks with AK-47s and hand grenades. At the same time, burning tires and incendiary kites and balloons have caused hundreds, if not thousands, of fires. The town of Sderot, just over half a mile from the Gaza border, has been so inundated by rockets and mortars for so long that it’s been dubbed the “Bomb Shelter Capital of the World.” In addition, the Israel Defense Forces (IDF) have uncovered numerous terror tunnels, designed to sneak terrorists, weapons and bombs into Israel.

The Jewish National Fund has been on the ground with the communities in the area known as the Gaza Envelope, bringing safety and solace. JNF funds the building and maintenance of trauma resilience centers, the Sderot Indoor Recreation Center (a 21,000-square-foot secure indoor playground and community center, Israel’s largest such facility), construction of bomb shelters that house up to 100 people each, while delivering new fire wagons to the 32 communities located along 65 kilometers of the Gaza Strip. JNF also funds fire trucks, fire extinguisher wagons, which can get to and extinguish fires more rapidly than large trucks, and other life-saving equipment.

On Aug. 28 JNF hosted a program on the Gaza border crisis. Concerned Israel supporters gathered at Temple Israel of Boston to hear the personal stories of Israelis living under constant attack while trying to live life and raise children, largely ignored by the media and most world governments. “Here’s the story that’s not being told,” said JNF’s Risa Aronson in her introduction to the program.

Michal Uziyahu lives on the Gaza/Egypt border, where she runs a community center. “Balloons and kites used to be symbols of celebration,” she said, “but no more for our kids. On a daily basis for six months there have been explosives launched at us, burning crops, fields and nature reserves. This is true terror.” Explaining that her children are hyper-aware of the sound of a Code Red Alarm, she played an audio of the alarm, which was very disturbing. “This is the soundtrack of our lives,” she said. “We have 15 seconds from the time we hear the alarm till we can get to safety.”

Uziyahu was born in the Sinai. Growing up, she optimistically assumed that by the time she turned 18 there would be peace and she wouldn’t have to serve in the army. She admits, “I was wrong.” In addition, her home became part of the political chessboard of the Middle East. Although Israel had been the target of shipping blockades, military assaults and terror attacks staged in the area, Israel gave the Sinai up as part of the Camp David Accords, which had been signed in 1978. In doing so, Israel gave up 1,000 miles of roadways, homes, factories, hotels, health care facilities and agricultural villages. Over 7,000 Israelis were removed from their homes and businesses. The removal was completed in 1982, when Uziyahu, her family and neighbors left in hopes that their sacrifice would lead to peace.

Her family rebuilt their lives on the other side of the Egyptian border, an area, she explained, “that is not in disputed territory.” Then in 2005, still hoping to exchange land for peace, Israel disengaged from the Gaza Strip. Israelis in what is called the Gaza Envelope have since then been faced with what Uziyahu called “a new reality; the 15 seconds we have to get to safety when we are attacked.” She shared a song sung by preschoolers as they head on a regular basis to the bomb shelter in their school: “Hurry to the safe room, our hearts are pounding….” One day, as she was walking with her children, two rockets fell on the other side of the road. “We have not taught them to hate their other side,” said Uziyahu. “We are creating fortified resilience centers, therapy centers. We just want to live a normal life and support each other.” A mother of three young children, she acknowledged that they will all serve in the army. “Despite the hundreds of rockets and thousands of fires and the terror tunnels,” she said firmly, “Don’t feel sorry for us. We’re strong. Life in our region is 99 percent heaven and 1 percent hell. We focus on the 99 percent.”

“Thousands of our kids spend all day inside because it’s too dangerous to play outside,” stated Sderot resident Sarit Hanukayeva. To enable the children to have a semblance of a normal life, JNF built and maintains the Sderot Indoor Recreation Center. “If I’m in the supermarket and the public address comes on, the noise makes me jump. When the loudspeakers start to crackle, I’m scared. I’m afraid to stay inside with the door locked, and I’m aware everywhere I go of the 15 seconds it takes to get to a shelter.” When she was 7, a siren went off. She ran, fell and broke all of her front teeth. She stayed home, afraid to go to school. Hanukayeva’s parents came to Israel from Russia to start a new life. “This is not a life you’d choose for your kids,” she said. “But we are strong; we will never give up.”

Liz Harris of JNF explained that in recent months 10,000 acres of land and forest have been burned. “Think of 10,000 football fields,” she said. “Fruit, vegetable and wheat crops are gone, as are animals and  ecosystems in the northern Negev reserves, which were home to rare species. Many generations of animals have been lost.” The land will need time to recover before replanting can begin. “Have you heard anything about this from environmental and animal rights groups?” asked Harris. “Nothing.”

The family of Yedidya Harushget had a similar experience to that of Uziyahu after Israel left the Sinai and Gaza. “It’s hard for a 17-year-old to say goodbye to his house. It was heartbreaking to see our entire community bulldozed, but we moved on. The government assured us that peace would come.” Harushget also remembers the Second Intifada, which started in 2000 and led to the murder and maiming of thousands of Israelis. “When I was in the fourth grade,” he recalled, “there was an attack on a school bus on the way to my school.” Among the casualties were his best friend’s father, as well as three siblings who all lost limbs and were paralyzed. “The principle aim of terror is to stop you from living your life.” Harushget has been part of the effort to develop areas of the Negev that, prior to 2005, were, he said, “only sand. They called us meshuga [Yiddish for “crazy”].” With the help of JNF, Harushget and fellow pioneers built a new agricultural community with parks and schools, which has also fallen prey to the fires.

For more information on how to support the brave residents of these communities, go to jnf.org/menu-2/ways-to-help/ways-to-give/gaza-envelope. JNF suggests that people contact environmental and animal rights groups to keep them informed of the situation in the Gaza Envelope.