CJP’s Israel Advocacy is spending the week in Israel, visiting some of the success stories that make up the Start-Up Nation with academics from Harvard Business School. Nancy Katz, director of CJP’s Israel Advocacy and herself an alum of Harvard and a former professor at Harvard Kennedy School, will be blogging about the group’s experiences and impressions.

It’s now winter in Israel, but the summer of social protests in Israel are still fresh in the minds of many here. We heard from two experts on the subject today – Manuel Trajtenberg, a professor of economics at Tel Aviv University who headed a government committee looking at socio-economic change in Israel, and Nita Ziv, head of clinical law programs at Tel Aviv University who played a leadership role at the encampments.

Trajtenberg said the protests came as a shock, not only in terms of the sheer number of protesters, who totaled almost half a million people – or 6 percent of Israel’s population – but because of the situation in Israel. Things were going well, from a macroeconomic perspective.

While Israel’s summer of protests in Tel Aviv have been compared to Occupy Wall Street (OWS) and other offshoots of the Occupy movement, there were some clear differences, Trajtenberg said.

Israeli protesters made up a mass movement of middle class, working families. They adopted “pro” slogans, as opposed to OWS “anti” slogans, he said. In Israel, they were “pro social justice” making it easier for the government and others to sympathize and engage. And they have – Trajenberg told us that the Israeli government announced this week it would adopt one of recommendations from Trajenberg’s committee regarding mandatory kindergarten for three to five-year-olds.

Trajtenberg said this new generation of Israelis feels empowered after the summer protests and resulting government response, and he believes they will change Israeli society for the better.

Professor Ziv agreed that the Israeli protests were unique. At OWS, the enemy was Wall Street and the banks. In Israel, business was part of the problem, but the demands were expressed directly to the state. The state responded. It was “an unbelievably exciting process of engagement. Academics were in tent cities, giving lectures.” 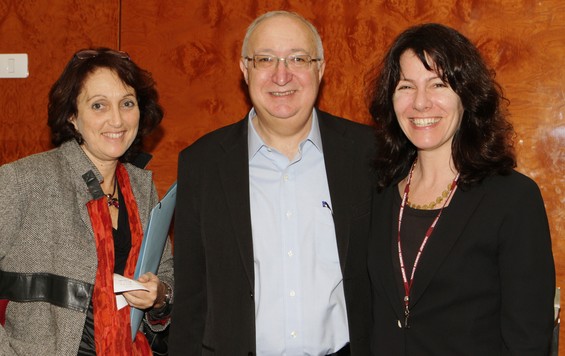 Ziv said the movement remained apolitical and steered clear of divisive issues, including the conflict with the Palestinians.

“It was a real leap,” Ziv said. “We got a taste as Israelis of what it’s like to engage in a discourse that wasn’t dominated by fear or threats to our existence. Since 1948, being a citizen equaled being a supporter of the state. Now, people expressing their commitment to Israel can mean a commitment to the state’s goals, but not the state’s means.”