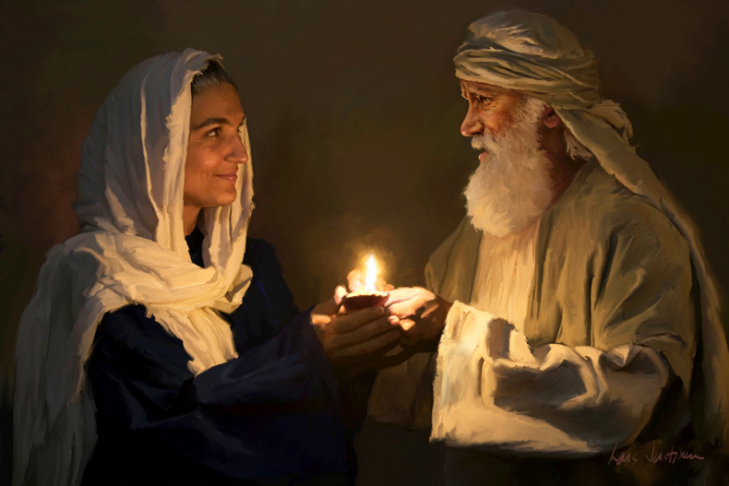 “Abraham and Sarah” by Lars Justinen

The first three verses of Parashat Vayeira present a number of puzzles to the Torah’s readers:

What is the relationship of the first verse to the second? The verse tells us that God appeared to Abraham, but this is followed neither by a description of a vision of the Divine, nor any message from God to Abraham. Ironically, Abraham’s eyes and vision are evoked in four separate terms in Verse 2, but what he raises his eyes to “see” and “behold” is a group of strangers whom he rushes to greet.

Maimonides understood the first verse as a summary statement, whereas Verse 2 begins to tell the story of this Divine appearance. Taking a similar approach, Rashbam succinctly writes: “God appeared to him. How so? Since these three men, who were angels, came to him.” As the story in the Torah unfolds, these strangers are revealed to be bearers of a prophetic announcement of vital importance to Abraham and Sarah: the birth of Isaac. Thus, though Abraham may only understand this later, the reader is let in on a secret from the opening verse of the chapter: The apparently-human encounter with strangers is, in truth, a story of God appearing to Abraham.

This reading also avoids the possibly scandalous impression that, while God was appeared to him, Abraham turned his eyes away from the Divine and ran to that which he saw. In fact, the Talmud sage Rav advanced this view, teaching that Abraham left the Shekhinah (the Divine Presence) in order to run to the passing strangers. He also said that we should learn from Abraham’s example here: “Welcoming guests is greater than welcoming the presence of the Shekhinah” (b. Shabbat 127a).

Rav’s reading also wrestles with a puzzle of the Hebrew in the third verse. Abraham’s request (“please do not pass…”) uses singular verbs, which implies that Abraham is speaking to only one person. Oddly, his term of address, ADONAY, seems to be plural (“my masters”). Yet ADONAY is also used, precisely with singular verbs, as a Divine name. This is how Rav reads the verse. He believes Abraham is not addressing his human guests here, but asking the Divine not to pass on from him—to please wait for him as he must go to attend to the strangers’ needs. This reading is also found in the Aramaic translation of Onkelos, who renders ADONAY with the Divine name Y-H-W-H.

Although I love the ethical force of this second reading, I worry that the modern popularity of the oft-quoted teaching about welcoming guests being greater than welcoming the Shekhinah reflects a modern Jewish discomfort with the notion of communing with the Divine. Was Abraham really sitting by his home, getting all the feels with the Divine Presence? Such a private mystical encounter may strike us as suspect in the modern age. It may seem illusory and/or self-indulgent. From this perspective, it is a relief to find a Talmudic sage telling us to follow Abraham’s example and run from such unconventional experiences toward the realm of ethical actions toward other persons.

I find myself drawn toward an alternative approach. The first verse tells of a private encounter that Abraham was having with the Shekhinah as he sat near his tent. There are neither words nor images conveyed to us about this encounter. Perhaps this is because Abraham’s communion with God here was beyond concepts and forms, or perhaps because that which was exchanged was private and not meant for others? At a certain point, just as Rav suggests in the Talmud, Abraham turns his gaze and sees a group of weary travelers, and he runs from his state of private mystical encounter to meet them. For Rav, the words “ADONAY, please do not pass from your servant” are a request for the Shekhinah to be there for him when he returns. Yet, what if we were to understand this moment as Abraham’s request that the Shekhinah not to pass from him even in this very moment? Perhaps he is asking for God’s presence to stay with him even as he now turns from his private meditations to a very different activity. Abraham is inviting the One, encountered in his private meditation, into his faster-paced daily activities with others.

This reading speaks to me because it values the private spiritual experience of “welcoming the Shekhinah,” even as it remains uncompromising about the value of the interpersonal. Rav’s dictum recognizes that an unhealthy attachment to private spiritual experiences can seduce us into devaluing the interpersonal. However, the idea that the interpersonal is “greater” than receiving God’s presence can encourage an unhealthy balance in the opposite direction. Abraham goes to be with and to help others, and even finds God there in a surprising way. However, the time and attention that Abraham dedicated to God as he sat with God by the entrance to his tent was crucial. This time invested in encountering—or seeking for—the Divine creates a pool of strength and connection from which we can draw even as we find ourselves running into new situations.

The story at the beginning of our parashah is about Abraham and Sarah being surprised by God, and the joyous news of the coming birth of their son Isaac. The guests were only able to deliver their message from God because Abraham ran to greet and host them, even running from his mystical communion with the Shekhinah. Yet it may be, too, that the message was only able to be heard by Abraham because he had practice listening to, and resting within, the Shekhinah in his private meditations.

Rabbi David Mayaan is completing his Ph.D. in comparative theology at Boston College. He received an MA in Jewish studies from Hebrew College, with a focus on Hasidism, in 2017. He has also taught courses in the Hebrew College Rabbinical School and in the Prozdor teen program.