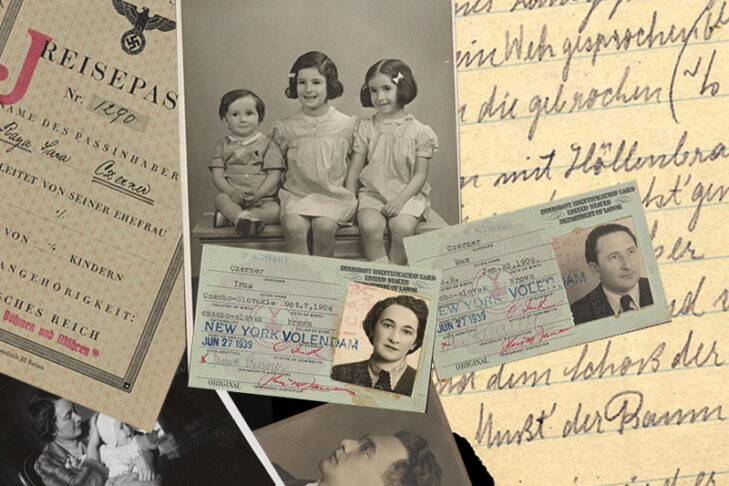 Jason Slavick, the founder and artistic director of the Cambridge-based theater company Liars & Believers, is bringing his late mother-in-law Raya Schapiro’s 2006 memoir, “Letters From Prague,” to the stage. The memoir is based on a bundle of letters Schapiro’s family discovered cleaning out her apartment in 1988.

Slavick was taken with the correspondence between Schapiro’s parents in Chicago and her grandmother and uncle stranded in Prague during the Holocaust. He immediately began thinking of how to transform the letters into a play. To that end, Slavick has been incubating the piece for over 15 years, recently having the opportunity to work on it more consistently during the pandemic. Although “Letters From Prague” as a play is still a work in progress, Slavick will present an abbreviated stage reading at Gann Academy (where he worked as director of drama for over a decade) on Tuesday, April 26, on the eve of Yom HaShoah (tickets will be available here in April). He will also be in conversation with Jewish Arts Collaborative executive director Laura Mandel on Friday, March 18.

How do you incorporate your eclectic taste in the works you stage at Liars & Believers?

I’ve been interested in different ways of telling stories throughout my professional career. That led me to create a theater company that made original art doing various things like puppetry and masks. At the time, nobody in Boston was doing that kind of theater. So, I started the company with a mission to create original work exploring different forms of storytelling. In the beginning, I leaned into musical theater as a form to see how much I could incorporate it into drama. I’ve always been interested in mythology as a source of storytelling. I like the epic scale of myth and how it engages with something deep in the human experience and psyche. The myth that has spoken to me most deeply is Jewish source material. From the biblical to folklore, I have a deep connection to the treasury of our own stories.

Although Liars & Believers is not a Jewish company, my Jewish background influences what we stage. We did a show called “Who Would Be King,” an adaptation of the story of King Saul. In 2011, we did “Song of Songs,” a dance and indie-rock musical adapted from that text. Before I started the company, I wrote and directed an adaptation of the story of Jephthah from the Book of Judges. I’ve written an adaptation of stories from Chelm. I dramaturged and then directed the premiere of Emily Mann’s “Meshugah,” which is adapted from Isaac Bashevis Singer’s novel. And like many Jewish artists, I did an adaptation of “The Golem of Prague.” The art I make is an expression of what’s on my mind at the time. It happens that often what’s on my mind is something Jewish. I love Tanakh [Bible] and dig the stories we read in the Torah every week. And as one section after another comes to mind, I think, “Oh, that would make a good play.” What’s the story behind “Letters From Prague”?

In 1939, my mother-in-law’s father, Max, was an executive at Shell Oil in Prague. He was married to Irma, and they had three children—Helga, 7, Raya, 5, and baby Tom. The Nazis occupied Prague, and Max and Irma knew they had to get out. So, Max cut a deal with a Nazi officer—he would give the Nazi their new, luxury apartment for the Nazi’s mistress in exchange for five visas. The day of the exchange came, and the Nazi showed up with only three visas. So, Max and Irma, with baby Tom, got on a boat to America, expecting Raya and Helga to follow a week or two later. The girls were left with their grandmother, Paula, and their uncle Ervin. Paula and Ervin wrote letters to Max and Irma, detailing how one thing after another went wrong. Weeks turned into months, and they were desperate to get the girls to their parents. Six months later, the girls were on a boat to America accompanied by another uncle, and then it was a race to get Paula and Ervin and the rest of the family out of Prague. But they were eventually sent to Terezín and then on to Auschwitz and Treblinka. Throughout this time, they were writing letters back and forth. In 1988, when Max died, the family found a box filled with all the letters written in Czech and German.

Paula wrote in German and Ervin in Czech, and their story intimately unfolds in their first-person perspective as it is happening. The family had the letters translated, and the plan was to publish them for the family. But the editors at Academy Chicago Publishers saw the value in publishing the letters more broadly. Sure enough, there was strong interest in the book, which came out in 1991. What makes the book unique is this perspective of hearing from the people who didn’t survive. We typically hear from survivors telling a narrative they remember from the past. But “Letters From Prague” is like reading a diary. Another interesting thing about the book is that Michael Chabon references it in his novel “The Amazing Adventures of Kavalier & Clay.”

How did you transform these letters into a theater piece?

What is interesting about these letters as a theater piece is not the story itself, although the story is gripping and terrifying and horrible, like all Holocaust stories are. Instead, it’s the intimacy of hearing the voices of the people in their own words. And it’s personal because Paula is writing to her daughter and Ervin is writing to his sister. It’s a challenging project. A theater piece is different from a memoir and limited in time. It’s ephemeral. It’s also limited because it can only be as long as an audience will sit and listen. It has to be a digestible story. A memoir doesn’t have to have a clean narrative. It can wander all over the place, and you can pick and choose parts and read it out of order. A play has to be absorbed more narrowly. So, the first challenge was figuring out the narrative. The second challenge was cutting it down.

How did this material affect you?

The project has been more emotionally taxing than I expected. I had a sense of how taxing things would be in terms of the dramaturgy. But I did not adequately prepare myself for the personal aspect of it. I know the people in the story; it’s my wife and her brother and her siblings. I met her mother before she died. I met her aunt before she died; those are the children. I just saw her uncle last summer. That’s why this project has been percolating for 15 years. I’ve been actively working on it for about a year, but it’s still not ready for a full staging.

What are some of the artistic decisions you had to make to present this play?

Except for a little bit of narrative—about a minute at the beginning and about two minutes at the end—I’m only using the words of the letters. I’m not creating dialogue. My goal is to do justice to the letters and the people who wrote them, bringing their words to life. We also have a trove of imagery from the family—the people and places, the pictures of the documents, passports and letters. We are working with seniors at Gann Academy to develop a visual installation that accompanies the play. It will feature live actors bringing the letters to life in the person of the writers, plus a video installation and music. All of it is working in concert.

As you look toward premiering the play next year, are you collaborating with other organizations?

We’re working with Facing History & Ourselves, a major funder. Facing History is also engaged with the education component. Raya’s book and this project are core to the Holocaust curriculum at Gann this year, and Facing History is central to that. CJP is also generously funding the project, along with private donors.

Is there anything else you want to add to our conversation?

I’m driving this project on instinct. It’s one of the first times I’m doing a project where I don’t know where it will go or what will become of it. But I think it will become a valuable educational project. I’m certain we’ll tour schools and Jewish community centers. But I’m also hoping it will become a commercial project that broadly impacts all people.