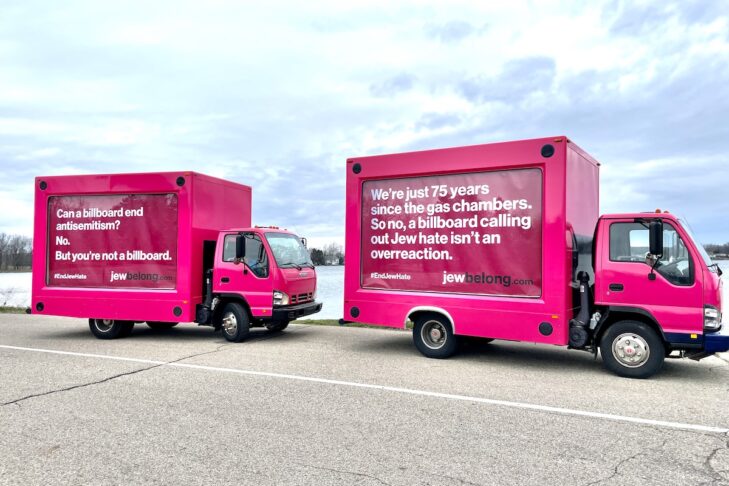 Antisemitism is spiking across the country and JewBelong, a nonprofit organization dedicated to inspiring Jewish joy as well as fighting antisemitism, is leading the charge to shine a light on the hate. The expansion to universities follows an increase in on-campus antisemitic attacks, including the destruction of property, ripping mezuzahs (Jewish ritual items) off of doorposts, offensive language toward Jewish communities, an increased presence of swastikas across campuses, as well as virulent anti-Israel activity that becomes threatening to Jewish students on campus. Through our signs and additional initiatives with Jewish organizations, JewBelong hopes to educate the general public on the dangerous rise of Jew-hate.

In conjunction with on-campus promotions through the universities’ Jewish organizations, the truck was based at Indiana University from April 21-25 with slogans including:

“Antisemitism has become tolerated and normalized on far too many campuses across North America,” says JewBelong co-founder Archie Gottesman. “The type of hate leveled against Jews followed by the deafening silence from supposedly good people should be abhorrent to anyone who stands for justice. You don’t have to be a historian to know that being quiet about hate doesn’t stop the haters, it emboldens them. The time of Jewish people being silent in hopes that the hate will disappear has long passed.”

Starting in 2021 following the increase of antisemitism in the United States, JewBelong’s #EndJewHate awareness campaign has appeared across the U.S. in major cities including New York, Philadelphia, Boston, Washington, D.C., Los Angeles, Las Vegas and Miami, and most recently launched internationally in Toronto.