The desire to reach out to the LGBTQ+ community had been incubating for years at Jewish Big Brothers Big Sisters (JBBBS). That aspiration became a reality this past fall when the organization received a matching grant from Massachusetts Service Alliance. “The intention was to have a pilot program,” said Tania Gray, JBBBS outreach manager. “And there was always the goal to cultivate a community.”

Cultivating community is an intentional and group effort at JBBBS. A private family foundation soon matched the grant, and JBBBS match specialists were immediately fielding calls from potential mentors and mentees. “The demand to get involved in this program has been unprecedented,” noted Jeffrey Savit, JBBBS president and CEO. “The program officially began in December, and we almost can’t keep up with the intakes and recruitment.”

In JBBBS parlance, this means that the organization’s social workers and clinical match specialists have been flooded with requests to pair “bigs” from the LGBTQ+ community with “littles”—children who range in age from 6-18. Thus far, Savit and his colleagues have been happy with the response. “This is a new point on our JBBBS continuum of caring services to serve the needs of our LGBTQ+ community,” he said.

Added Laura Shulman Brochstein, JBBBS clinical program director: “So far we’ve seen an abundance of volunteers, and we’re looking for littles to match them with. So many people would love to be the mentor they wished they had. We know the kids for this program are out there; it’s a matter of getting out the word.”

To that end, Gray said there has been a concerted social media effort to recruit for the program. “There is so much opportunity because it’s a pilot program,” she said. “We are already looking at ways to improve it, and we’re attracting partners from the community.” 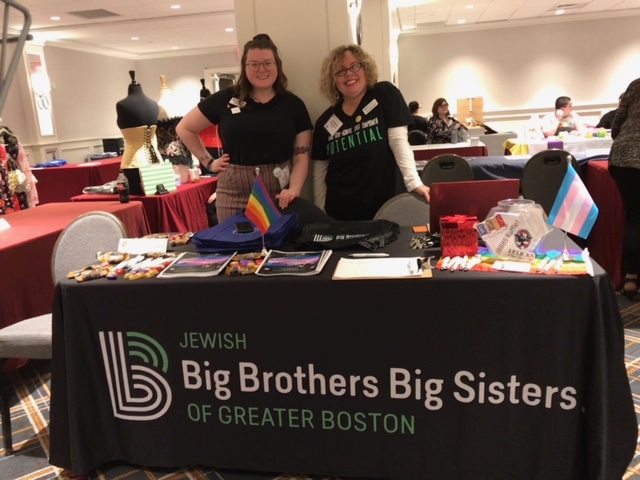 In addition to program recruitment, Mass Mentoring Partnership trained JBBBS staff. “The staff wanted to be as educated, empathetic and inclusive as possible,” Savit said. “It’s such an important initiative that we offered the opportunity for everyone on our staff to participate. I am so gratified that we are doing this program. It’s filling a niche in our Jewish community.”

Elyse Hyman, JBBBS director of major gifts and endowment, was in charge of researching the grant application. “I read through so much material and learned what this population of kids goes through,” she said. “There is often bullying and a lack of support for these kids, sometimes within their own families. This is an underserved population that is at an increased risk of depression and suicide.” Hyman further pointed out that in the last decade, LGBTQ+ youth have come out at a younger age. “A one-to-one relationship with a mentor who has dealt with these issues fills a vacuum for these potential littles,” she said.

As with all JBBBS programs, the application process to be an LGBTQ+ mentor is rigorous. Shulman Brochstein pointed out that once a potential mentor has been initially screened on the phone, there’s an extensive in-person assessment with a clinical match specialist. “We go into depth about someone’s family, relational history, volunteer experience and experience with kids and their motivation for mentoring,” she said. “We follow up with references and do a multi-layer background check. Safety is a prime concern. An accepted candidate will then go through the process of matching with a potential little.”

Shulman Brochstein added that during staff training, people were asked to take a deep look at biases and influences they may have, like how they figure into the establishment of an inclusive and welcoming place. Savit added that he and his staff also explored a new vocabulary during the trainings. “One needs to speak the language correctly,” he said. “For example, we learned about pronoun usage. The assumptions we held for decades are no longer valid. The training provided us with an awareness of vocabulary and sensitivity to welcome our new cohort affirmatively into our organization.”

This month, JBBBS made its first match. “It’s thrilling,” said Hyman. “We have a plan, and we’re on our way.” For Gray, the matching process is an opportunity to bring together people in the queer and Jewish communities. It’s an alliance that she said can make a difference in the life of an LGBTQ+ youth. Added Savit: “I’m so proud that we created this new program. There’s a need in our community that has not been addressed until now. The fact that we started this program during our centennial year is truly wonderful.”

To learn more about the program, email volunteers@jbbbs.org.