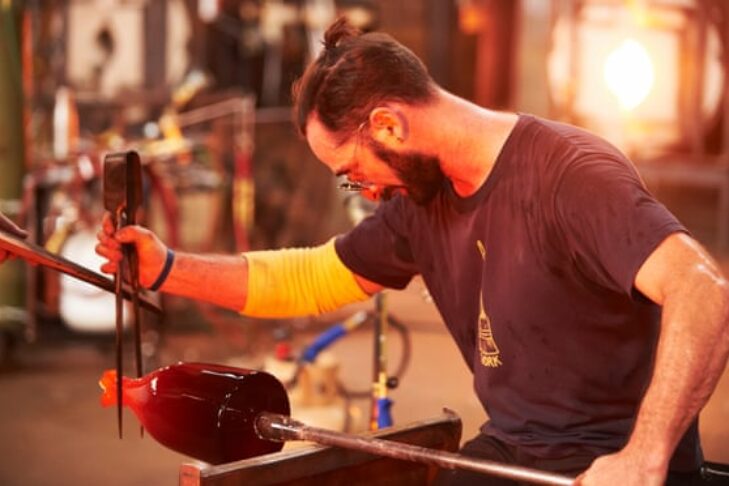 Alex Rosenberg takes The New Yorker’s description of him as a “quiet minimalist in a man bun” in stride. Rosenberg was one of the breakout stars in the first season of Netflix’s multi-week hit “Blown Away,” a surprisingly compelling competition to find the best glass artisan among 10 contestants.

In a recent conversation with JewishBoston, the Philadelphia-based glass artist said that although he favors blowing clear glass, it comes with its own set of complexities. “You’re dealing with reflection and optical distortion,” he explains. “You’re seeing every color inside the object instead of just one color. Clear glass is complicated from a formal standpoint and not necessarily minimal. If you look at my other work, you can see there’s a breadth of interest and multidisciplinary methodologies that I would say approaches maximal as opposed to minimal.”

As for the man bun, Rosenberg said that putting his longish hair in a ponytail is more practical than trendy when working in the hot shop. How did you get into glass blowing?

I was always interested in art and being an artist. Like many younger people, I didn’t have a full idea of what that could be. Through a long and not interesting sequence of events, I dropped out of high school. I was living on the West Coast and sharing a room with a guy who was taking classes at the local community college. He was coming home with these very unsophisticated blobby glass things, but I was very excited by the fact that this process, which I always thought of as pretty industrial, could be accessed with just an individual human hand. I took the class, and I was terrible at it, but I fell in love with the process.

I did finally get a high school diploma, and then I went to art school, where there was a glass program. I always thought I would be a painter, but when I saw there was an option to get a degree in this process that I like so much, I was in. I discovered how to incorporate the material into making artwork; I hadn’t conflated the two before. I thought there was art that I knew and there was this process that I like. The ability to put those things together and experiment was important to forming the artistic practice I have today. One of my favorite things you made on the show was called the “lachrymatory viewer.” As you noted, a lachrymatory is a small vessel historically used to collect tears as part of a mourning ritual. When you filled your lachrymatory, there was a lens magnifying the face of your beloved dog from a photograph. How did that piece embody your process?

That piece shows some of the things that I’m very interested in with glass. There are themes specifically related to what glass can do. So these ideas of optics and visual transformation, the notion of alchemy, collecting and preserving specimens, seeing the unseen—these are all things that are inherent to what glass does as a material and what drives my process.

I’m a project-based artist. My projects aren’t driven by a particular process or material, per se, but more by the topic I’m working with. That being said, all of it is influenced by what I call a studio practice that’s based in glass. For example, I see the world through the lens of this material. If I worked in carpentry or jewelry, or something else, I would still be doing it in a glass-like way. I’m frequently asked what it’s like to practice architecture in a glass-like way. What is it to practice historical research through the lens of this material?

Have you made Judaica?

I haven’t yet, and there’s no particular reason except I’ve been doing more commissions because of the show. I just got a request to create a seder platter, and I was excited to figure out how to do it in a way that would fit in with the type of glassmaking I like to do. I haven’t quite gotten there yet, but I’m sure there will be an opportunity to do so. I’m grateful for this notable increase in my audience. It enables me to test designs in a meaningful way, and that helps me grow my practice. I have made candlestick designs that I like a lot and have given to friends, specifically for Shabbat candles.

Can you tell me about your Jewish background?

I grew up Reform and had a bar mitzvah. My folks are currently involved in a synagogue; I’m not, but I’m big into Jewish Twitter. There are some good rabbis that I follow. Twitter is where I get a lot of my Jewish discourse. 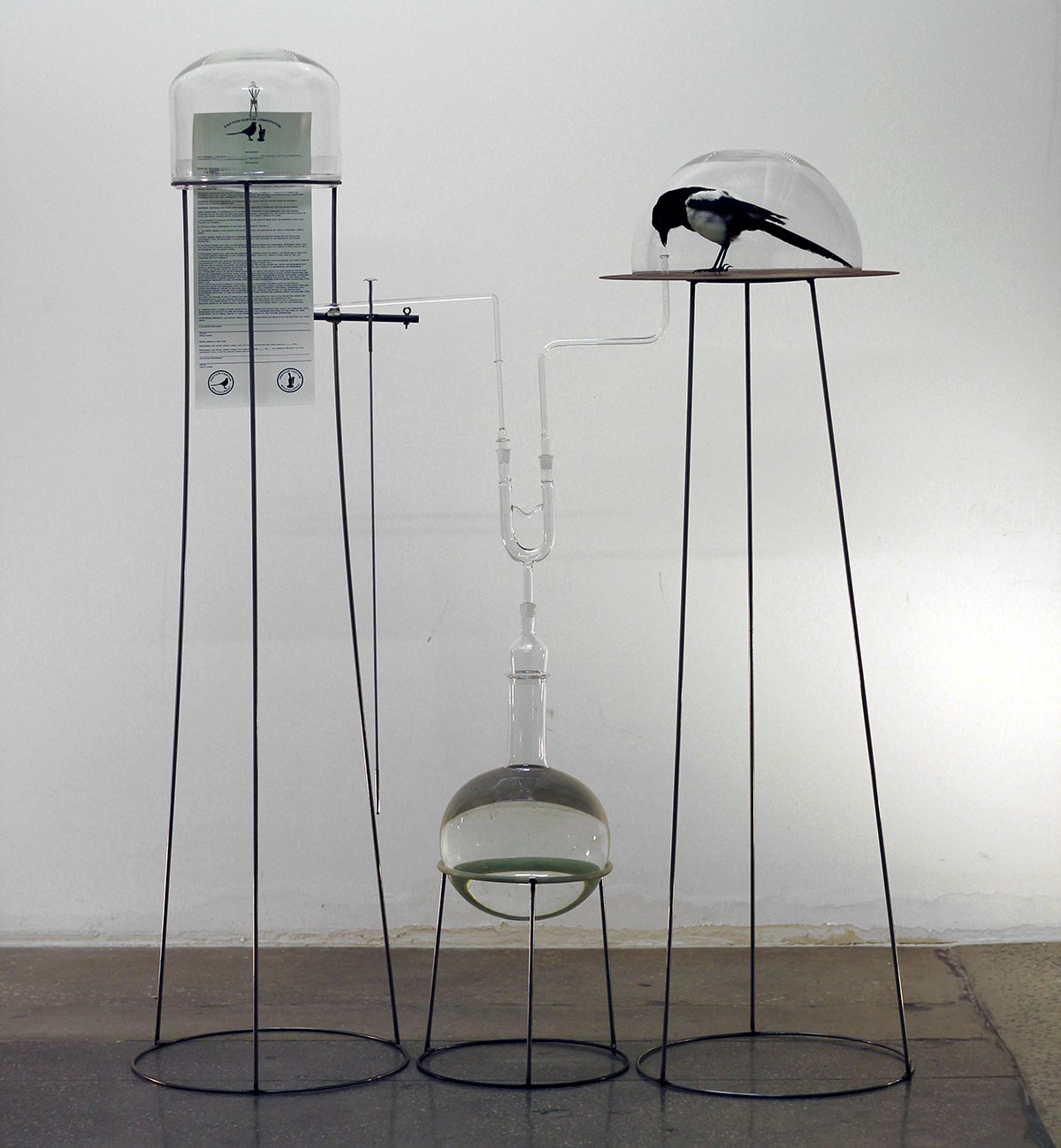 How did you end up on Netflix’s “Blown Away”?

It was entirely out of desperation. I had just left a job that wasn’t working out, and I didn’t have many prospects. When I get nervous about the future, I apply to a lot of stuff. I saw a call on social media to cast a reality television show with glass blowing, and honestly, it sounded awful. I’m not a fan of reality TV. But I was looking for work, and this was an opportunity to get paid for the thing that I do, so I signed up. I was surprised that the show’s producers were interested, and I embarked on the process. There were multiple levels to go through, including making a video of why I wanted to be on the series. I submitted samples of my work, and the next thing I knew, I was in Canada blowing glass in front of a camera!

Besides being extremely warm, what was it like for you to compete in the hot shop?

It’s very intense in there. The one thing I can say is that being somewhat experienced in glass gives you proficiency in performing in front of an audience; it’s part of what working with that material is. If you go to a hot shop and see people working, they will inevitably attract a crowd. Failing in front of an audience is something you learn to cope with early on in blowing glass. That’s not to say that it wasn’t especially nerve-wracking having cameras around me and trying to negotiate a new studio.

You then became a judge on an episode of the show in Season 2. What was it like being on the other side of the experience?

It was much more relaxed. If you know anything about filming television, there’s a lot of downtime. It was quite leisurely, with nice dinners and being able to sleep in. It’s a lovely way to show up and be involved. However, they make a point of not allowing you to interact with the artist-contestants, or the glass workers. But I’m an educator, and I like this idea of critique. I like to look at new work to understand it better and give feedback to the people making it. That’s part of what I do as a teacher.