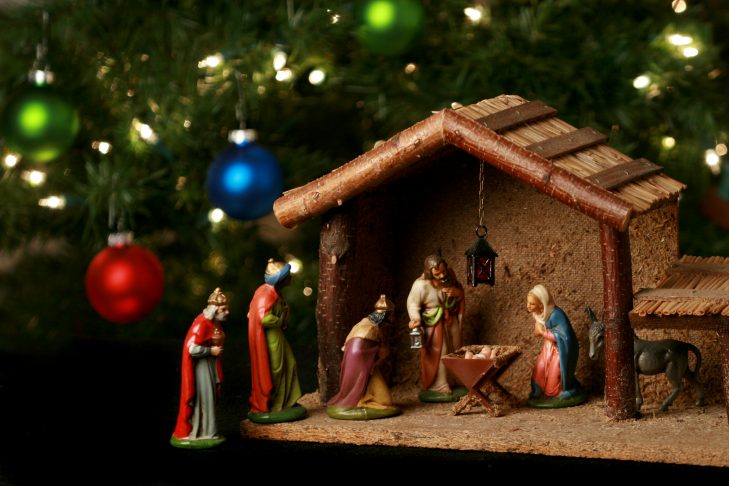 Christmas looms so large in America that the scarcity of Jewish fiction about it leads me to wonder if writers have made an effort to ignore it. They have succeeded so well in not writing about it that I know of only two Jewish short stories about Christmas. Their authors, Grace Paley and Nathan Englander, succeeded spectacularly in writing them.

In Paley’s “The Loudest Voice,” an elementary-school student, Shirley Abramowitz, gets tapped for a major role in a New York public school Christmas pageant, circa I don’t know when. The ‘20s? The ‘30s? (There’s a reference to Palestine, not Israel.) The reason? A teacher said, “They told me you had a particularly loud, clear voice and read with lots of expression.”

How major a role? She delivers the line, “My God, my God, why hast thou forsaken me?” Yes, she’s the voice of Jesus. Some Christian kids got shut out of roles and this child of Jewish immigrants speaks for the Christmas child.

Shirley’s father is accepting. Her mother considers it part of “a creeping pogrom.”

The story’s last two paragraphs are easy to glide through, but pay attention. When the pageant is over and Shirley ends her day by praying, the way she does it might indicate that her mother was right.

The last two sentences are marvelous. They touch on a theological advantage, not merely the dramatic one, of having “The Loudest Voice.”

In Englander’s “Reb Kringle,” an Orthodox rabbi plays Santa Claus for a month each year to help pay rent on his shul and home in Brooklyn, which are probably the same building. In the department store, he is the only Kris Kringle “with a real belly, the only one whose beard does not drip glue.” Under his Santa cap, he wears a kippah. With his Santa suit undone, his patent leather belt hangs at his sides with his tzitzit.

When he arrives at the department store, this conversation ensues:

“I heard about you,” the elevator man told him, shoving the empty garbage dollies to the back wall. “You that Rabbi Santa.”

Itzik becomes sure that God is testing him—sadistically. “Both his pants legs were wet with the accidents of children who showed their excitement like puppies.” Itzik starts to lose it.

“Did you pay federal and state taxes, both?”

When Itzik gets an unusual request—not for world peace, which sappy children ask for—he melts down worse than, well, worse than a scared kid on Santa’s lap. (Englander’s description of such a kid: “His bottom lip” was “flapping as he primed his crying machine.”)

This is a story about Christmas with a blatant Jewish angle, but it is latent, too. The meltdown grabs our attention, but something subtle is going on.

“I can find it in my heart to forgive you,” Itzik tells the boy with the unusual request, as if the Christmas-time inquiry into whether a child has been naughty or nice is incomplete without forgiveness. It’s akin to what Jews do during the Days of Awe.

There are other allusions to the Days of Awe. Itzik sits on his gilt Santa throne, attended by elves, like God on high with attendant angels. In line to see him are “hundreds of worshiping faces.”

Waiting in line? To be reviewed one by one? That’s like the U­netanah Tokef prayer that we read on Rosh Hashanah and Yom Kippur with this imagery: “As a shepherd herds his flock/Causing his sheep to pass beneath his staff/So do You cause to pass, count, and record/Visiting the souls of all living.”

Hanukkah is not the Jewish Christmas. But in Nathan Englander’s hands, Christmas just might be the Christian Yom Kippur.

You can read “Reb Kringle” in Englander’s “For the Relief of Unbearable Urges.” You can listen to it on Audiobooks. To hear a sample and then pay for the full story, click here.

You can find “The Loudest Voice” in the following books by Paley: “The Collected Stories,” “The Little Disturbances of Man” and “A Grace Paley Reader.” It has been anthologized many times, including in “Jewish American Literature: A Norton Anthology,” “The Roads from Bethlehem: Christmas Literature from Writers Ancient and Modern,” “Imagining America: Stories from the Promised Land,” “Tales of Our People: Great Stories of the Jew in America” and “The Heath Anthology of American Literature: Late Nineteenth Century, Vol. 2.”

You can hear Grace Paley read her own story for Vermont Public Radio here. The actress Rhea Perlman also recorded “The Loudest Voice” for Yiddish Story Time, with Boston’s own Leonard Nimoy recording the introduction.