“To Catch a Thief” by JArts TheatreWorks (Photo: JArts)

Garlick and Robinson have reimagined the Chelm stories for JArts TheatreWorks with puppetry, masks and clowning. In case you’re not familiar, the Chelm folktales go back to the 16th century and feature foolish villagers from the eponymous Eastern European town. Chelmites, notable for their lack of common sense, naively consider themselves to be exceptionally wise. That misnomer is the basis of many a comedic situation.

JArts will be presenting four successive live shows on Thursday evenings in February. The first of the performances, on Feb. 3, presents Chelm’s origin story in “How the Town of Chelm Came To Be.” The remaining shows explore hilarious relationships and zany propositions that include stealing the moon. Each weekly presentation will entertain all ages and demonstrate why Jewish culture has kept these tales alive for four centuries.

Jesse Garlick recently spoke to JewishBoston about bringing Rossel’s book to life on the stage.

What is so compelling about presenting the Chelm stories now?

The interesting thing about the project is that they are comedic; there is levity in these intensely dark moments for us to play with. Those are the stories that people are keen on right now. The bigger aspect is that these Jewish folktales have been passed down from generation to generation for 400 years. It’s always a good time for these stories—they remind us that our identities as Jews go beyond the five books of the Torah. Our folktales are more than just the stories of Moses. Those stories are amazing, but I love that Sholem Asch’s stories have been reinvented for generations and generations. 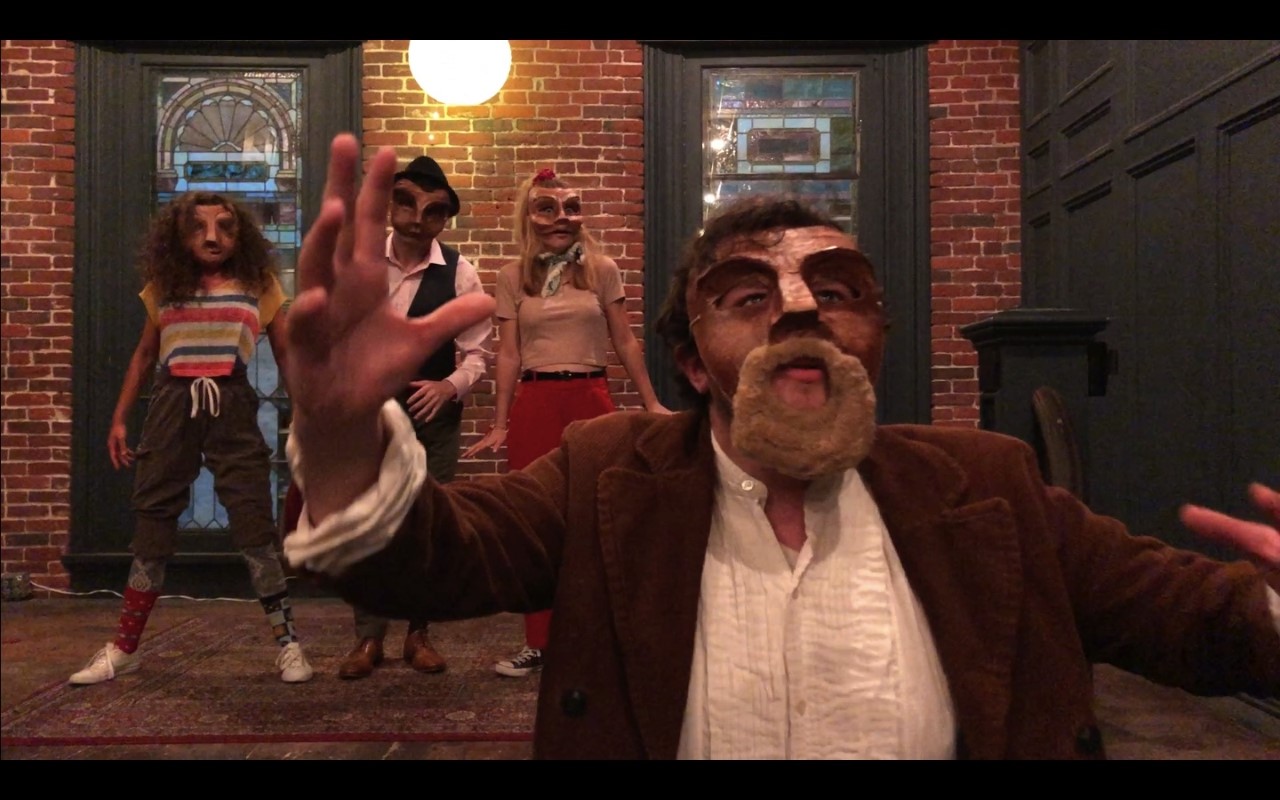 “How the Chelmites Stole the Moon” by JArts TheatreWorks (Photo: JArts)

You’re sharing these stories in a novel way using puppetry and masks. What’s behind those artistic choices?

Although we’re telling Jewish folktales, we wanted to bring other folkloric storytelling methods. The goal is to take those methods and mix them to see how they fit. We’ll be using shadow puppetry, which comes from Malaysian folkloric tradition. We’re using regular puppetry, which extends all the way back to “Punch and Judy,” to the 1000s and early medieval morality plays of Europe and England. We’re using mask work, which stems back to the Greeks, and we’re taking on a more commedia bent, which brings in the commedia dell’arte Italian bent of storytelling.

We wanted to tell Jewish stories in ways that pick from different modalities of storytelling that come from the cornucopia of theater. We also wanted to keep the audience on their toes. Each one of these stories will premiere each Thursday in February. Each piece is new and exciting for the audience.

Can you say more about your use of puppetry based on Malaysian folktales?

Puppetry is one of the older theatrical traditions we know of, even predating the Greeks. In Malaysia, China, Vietnam and Sri Lanka, there are early traditions of people telling stories and narratives by taking paper cutouts, placing them on a sheet and lighting a fire behind them. It’s a very dynamic mode of storytelling. We use a scrap of paper to slice up. We then bring in a little fire to backlight that piece of paper. We move the paper around as we use a stick to move the puppet and narrate the ongoing events. 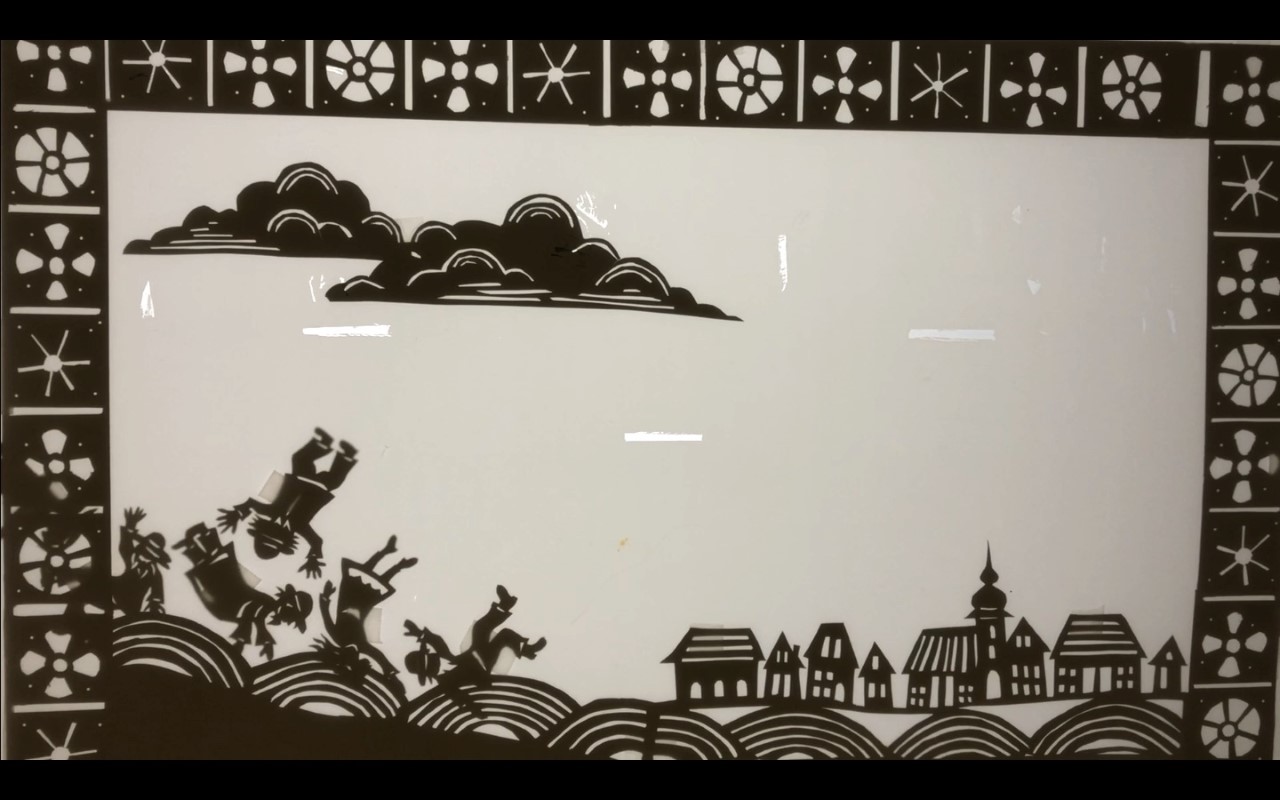 “How the Town of Chelm Came To Be” by JArts TheatreWorks (Photo: JArts)

You’ll be presenting four distinct Chelm stories through these various modalities. How did you pick a particular modality for each story?

Our goal was to keep things fresh while utilizing forms we were familiar with. I have a lot of experience working with masks, shadow puppetry and puppetry. My co-adaptor, Dori Robinson, also has a lot of experience working with masks. We’ve directed more traditional plays as well. But we wanted to utilize all these forms that we’ve come to know well over our professional career.

Our first piece is an origin story—how the town of Chelm came to be, and it utilizes shadow puppetry. It’s a tale that feels grand and epic. We’re talking about God, we’re talking about angels and we’re talking about people being picked up by their hats and dropped off in different villages. We didn’t have the budget to try and pull off all these things. But shadow puppetry can lend that idea of scope and storytelling. One of the reasons it was invented was to tell stories of gods and kings and armies. It gives us the ability to share those stories. So, that’s what attracted me to use that mode for that narrative.

We felt the mask work in “How the Chelmites Stole the Moon” translated well for that story. I love the communal storytelling aspect of the last piece we’re presenting, “Winter of Discontent.” The piece presented an exciting way to bring live actors into the space. We also wanted to capture Chelm’s communal history by having the actors running around the space, giving it the feel of presenting a theater piece in one shot. Those are some of the reasons we showcased these stories and decided to use these modes. 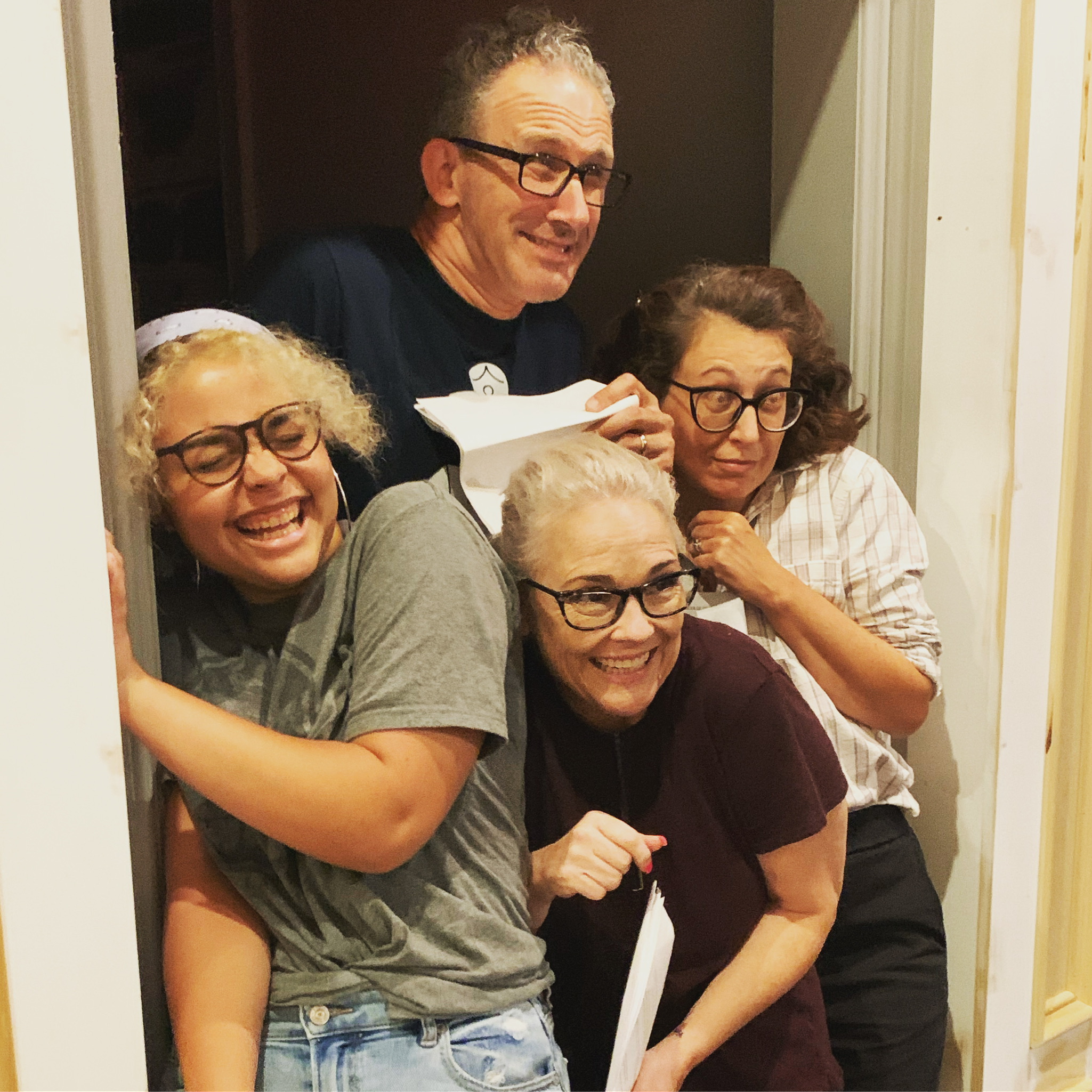 What strikes you most about these stories?

One of the reasons these stories have survived for so long is that they’re stories where the narrators are poking fun at themselves. But they’re also surviving; they’re utilizing their comedy, humor and self-degradation to push through and forward. And all these stories, at the end, have morals. These people might have gotten the wrong answer, and they might have stumbled along the way, but in the end, they’re saying, “Eh! What can you do? We’ll make the best of it.”