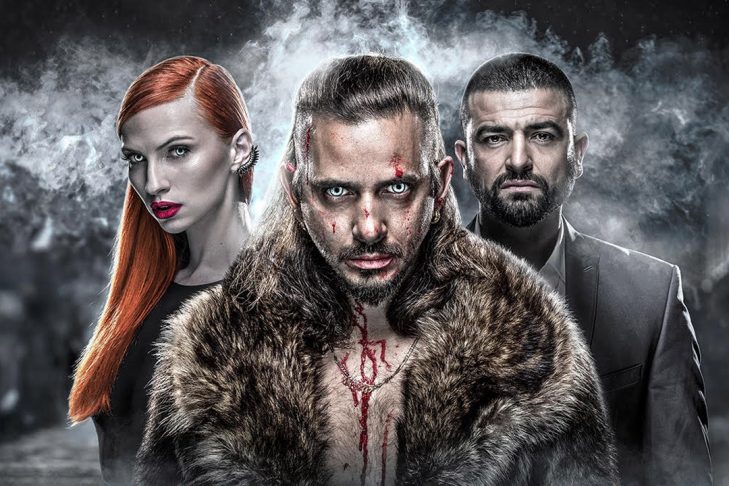 I love pop culture vampire stories, from “Buffy the Vampire Slayer” to “What We Do in the Shadows.” (But definitely not “Twilight,” except for purposes of mockery—it’s excellent on that level.) When I read that “Juda,” an Israeli show about a Jewish vampire, was coming to Hulu, I was thrilled. Ever since one episode of “Angel” talked about Rashi script like it was some sort of special, secret, magical incantation, I’ve longed for a story, grounded in Jewish culture, about a Jewish vampire. On the other hand, I was concerned such a story might serve to reinforce the anti-Semitic blood libel myths. But you know what? Fear of what anti-Semites might or might not think shouldn’t dictate what TV I enjoy. I refuse to let the alt-right stop me from binge-watching whatever the hell I want, and I decided that my opinion of “Juda” would be formed entirely on the show’s own terms. I’m delighted to say that “Juda” delivered one hell of a hilarious, gleefully quirky and weird eight-episode first season, showcasing a Jewish anti-hero’s journey to teshuva, friendship and love.

“Juda” was created by Tzion Baruch, who also plays the titular character. When we meet Juda Ben-Haim in the first episode, he’s a gambler, a criminal and, frankly, an asshole. But despite that, due perhaps to Tzion’s Bambi eyes, diminutive frame, mini Ariana high pony and cheerful demeanor, Juda also has an endearing, impish quality. Juda is traveling to Romania to a high-stakes poker game to make enough money to cover his and his best friend Asher’s (Amos Tamam) not-insignificant debts. As luck would have it, Juda manages to snag 2 million euros at the poker table. Instead of relieving his problems, that win sets Juda up for a whole host of unforeseen problems.

A gorgeous redhead, Tanja (Anastasia Fein, rocking an aesthetic in the vein of Deborah Ann Woll’s Jessica from “True Blood”), shows up at his door to help him celebrate his big win. Juda assumes she’s a sex worker and invites her in to his hotel room, where he stashed his winnings. Juda demonstrates his oddball exuberance to Tanja—he puts on some music to set the mood and begins to lip-sync to Gotye’s “Somebody That I Used to Know.” To Juda’s delighted surprise, Tanja shows she can match his flamboyant eccentricity. She joins in, mouthing the words to parts of the song performed by Kimbra. It’s love at first lip-sync battle…until Tanja sinks her fangs into Juda’s neck. Because duh, Juda, you invited her in and she’s obviously one, a vampire, and two, here to steal your dubiously acquired moolah. Tanja drinks Juda’s blood but can tell immediately that something is wrong. She takes a closer look at a necklace he wears and realizes in horror that it has Hebrew letters. Tanja has majorly screwed up. Apparently, it’s a HUGE no-no in Eurotrash vampire society to bite a Jew (who knew?!).

Tanja’s vampire father and vampire brother (who looks like a lesser villain from one of the John Wick movies), tells her that Jews who become vampires gain extreme vampiric strength and are immune to traditional vampire weaknesses. Unless Tanja can kill Juda within his eight-day transformation process (mirroring the eight days before a baby boy’s brit ceremony), Juda will become incredibly powerful and Tanja will become a weak, mortal human being. A mortal with great hair, but still. 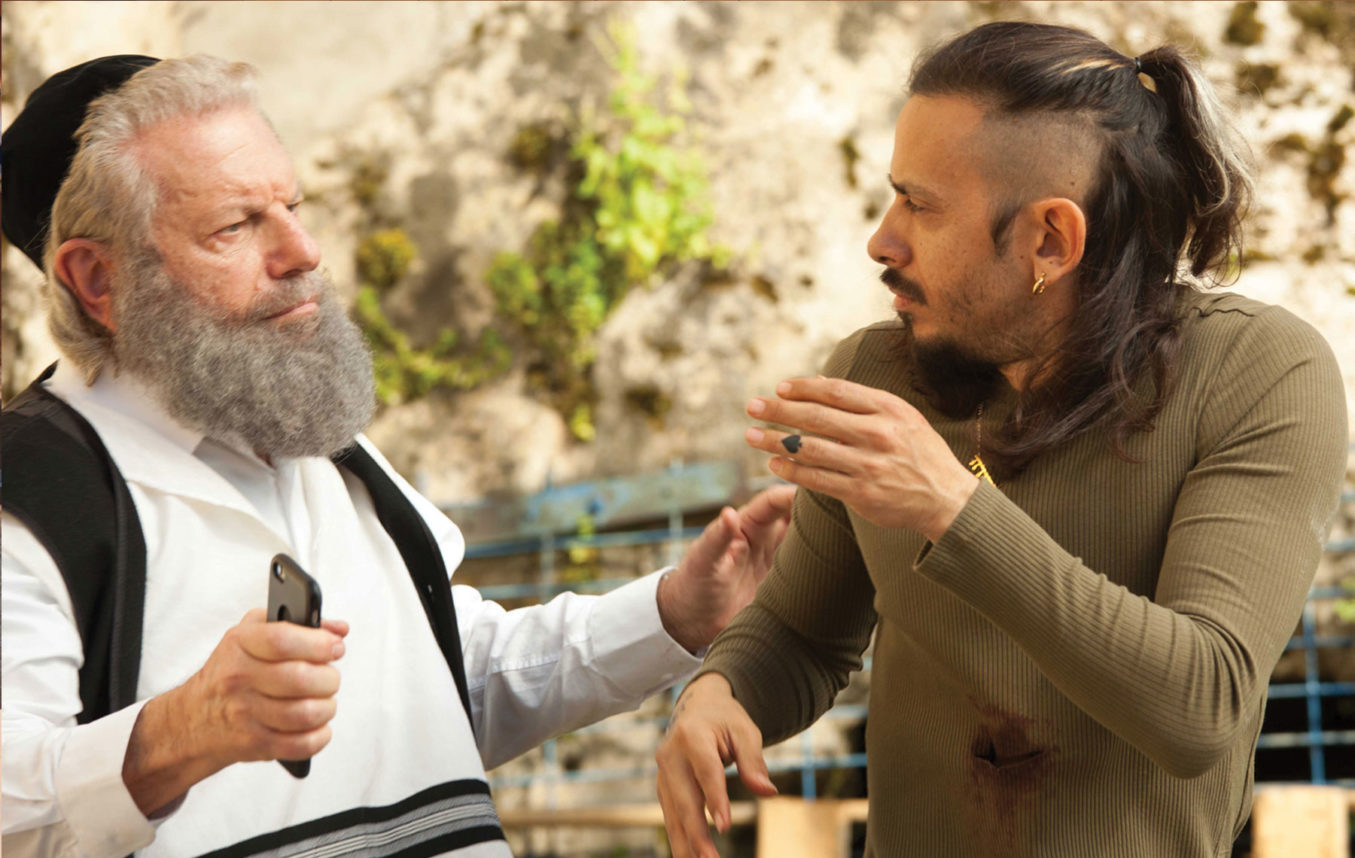 There are eight episodes for eight days. Each entry is titled with an applicable saying from Jewish scripture that relates to the theme of the episode. Episode 1, for example, is titled “Ye Shall Not Eat of It, Neither Shall Ye Touch It, Lest Ye Die.” Although this was originally said to Adam and Eve by God in Genesis, in this episode it clearly refers to Tanja’s mistake in consuming Jewish blood. The second episode is titled “Appoint a Teacher for Yourself and Avoid Doubt” (a line from the Mishna). Juda—back in Israel after realizing Tanja absconded with his poker millions, leaving him and Asher in massive debt to the French mafia—meets the rebbe (Mike Burstyn) of a group that may or may not be Breslov Hassidim. This rabbi and his student Menachem (Moris Cohen) are after Juda too, but for totally different reasons. They want to explain what’s happening to him and mentor him to turn him back toward humanity, so he doesn’t become an unstoppable demonic force. To that end, the rabbi shechts kosher animals so Juda has non-human blood to drink.

Tanja and her vamp squad fly (in an airplane, not as bats) to Israel to find and kill Juda, but wouldn’t you know it, Tanja has caught some feelings for our Juda. With the arrival of Tanja and co, attired in black latex and walking in slo-mo like the vampires from “Underworld,” suddenly there are a bunch of weird “animal bite” murders popping up in Israel for police investigator Avichai (Rani Bleier) to worry about.

Juda’s week-long transformation and adventures therein is informed by a loving yet tongue-in cheek irreverent treatment of Jewish and Israeli culture. Early on, when he’s mitzvah-ambushed by Menachem for the first time in the airport on the way to Romania, Menachem tries to get Juda to put on tefillin. Juda assumes the indignant stance of a skeptic and begins to pose a classic philosophical question: “If there is a God, where was he…” Menachem thinks he knows where this is going: “During the Holocaust?” he asks. “No!” Juda exclaims. “Where was he two weeks ago when I lost 100,000 shekels on a bet?!” There’s a running joke in the series that whenever anyone is trying to make a quick exit from being chased by vampires/the police/whomever, they have to come to a screeching halt because groups of ecstatic Hasidim dancing in the streets (a pretty common sight in Israel) are in the way. At one point, Menachem infiltrates police headquarters by pretending to replace their mezuzah scrolls.

Juda’s metamorphosis from human to vampire is genuinely compelling because, ironically, it’s juxtaposed with his evolution of becoming a better person and reconnecting with his humanity. The show has a lot to say about the importance of Juda doing teshuva (repentance) for his past behavior. In one scene, we see Juda’s body physically wracked by the manifestation of the internal battle of his yetzer hara and yetzer tov. Can Juda truly let go of his dangerous gambling addiction? Can he make amends with people he wronged in the past, like his mother or his ex-girlfriend, before it’s too late? Can he fight his overwhelming urge to drink delicious, forbidden and definitely not-kosher human blood? Will he even get to fully become his best vampiric self before those darn French mafia guys try to kill him?

I’ll let you watch and discover for yourself, but I will say that Season 1 ends with a shocking plot-twist reveal that made me shriek with glee. With the second season of “Juda” now in production, I’ll just have to lurk in the dark and bide my time for the next installment of this zany, charming show.