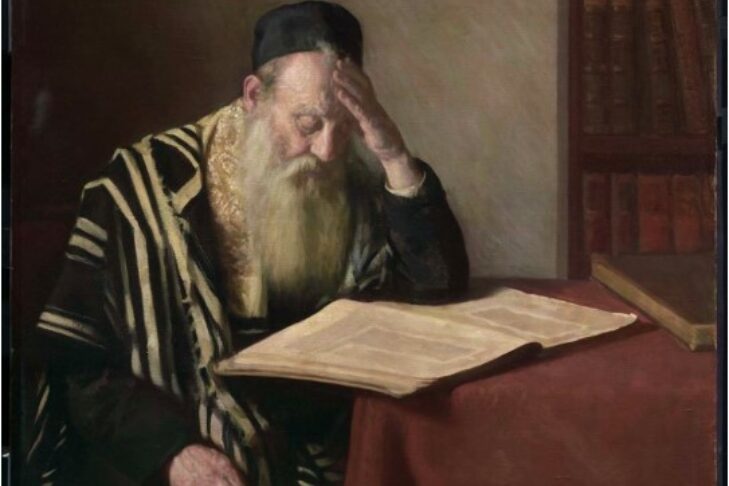 The painting above of a religious Jew deeply absorbed in the study of the Talmud was painted by Jacob Binder, a successful Russian Jewish portraitist who had studied with John Singer Sargent.

Although the sitter has been identified as a carpenter named Joseph Freeman, rather than portraying a recognizable individual, the painter intended to represent a type—that of an Orthodox immigrant Jew. To find this type, Binder would search for his models in Roxbury and Dorchester.

In 1926, members of the Boston Jewish community donated this work to the MFA in response to a public campaign for its purchase for the museum by Alexander Brin, editor of The Jewish Advocate. Six years earlier, John Singer Sargent’s representation in his murals for Boston’s Public Library of the Jewish faith as the blind-folded, dethroned “Synagoga” female figure, had caused an outcry among the Jewish community. Brin’s desire to donate the painting to “the great reservoir which is the pride of the city of Boston” was in part a reaction to Sargent’s murals, a wish to present “the most typical presentation that a dignified, self-respecting artistic Jewry could make.” 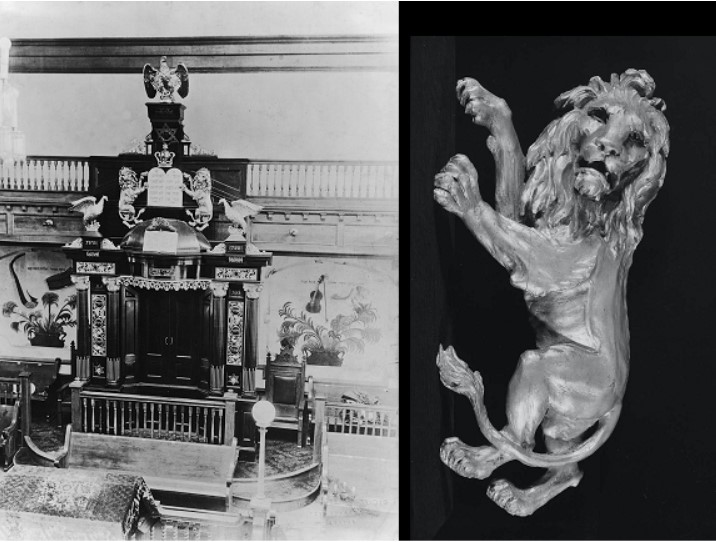 The wooden lion above tells the story of Jewish woodcarvers from Eastern Europe, and of the ingenious way they transferred their skills when they immigrated to America in the late 19th and early 20th centuries. In addition to building Torah arks, their workshops also made animals for carousels on Coney Island and other amusement parks.

Sam Katz, a prolific woodcarver from Lvov (Galicia), is known to have made over 24 Torah arks for synagogues in and around Boston. Some, like the Adams Street Shul in Newton and Walnut Street Synagogue in Chelsea, can still be visited.

This lion was one of a pair holding the Tablets of the Law on top of the ark Katz carved for the Anshei Poland synagogue in Boston’s South End. After the synagogue was demolished in 1957, a Boston dealer sold the lion to folk art collector Max Karolik, who in 1960 donated it to the MFA.

Will we ever find its long-lost companion?

The lion will soon be on view in the exhibition “Collecting Stories: The Invention of Folk Art” at the MFA.

Steven Fine, Art, History and the Historiography of Judaism in Roman Antiquity, Brill 2013 (introduction on “The Talmudist,” pp.1-6)

Jonathan D. Sarna, Ellen Smith and Scott-Martin Kosofsky, The Jews of Boston: Essays on the Occasion of the Centenary (1895-1995) of the Combined Jewish Philanthropies of Greater Boston, Yale University Press 1995

Did you miss my talk about Jewish American Heritage Month? Watch it below!

Simona Di Nepi is the Charles and Lynn Schusterman Curator of Judaica at the Museum of Fine Arts Boston.