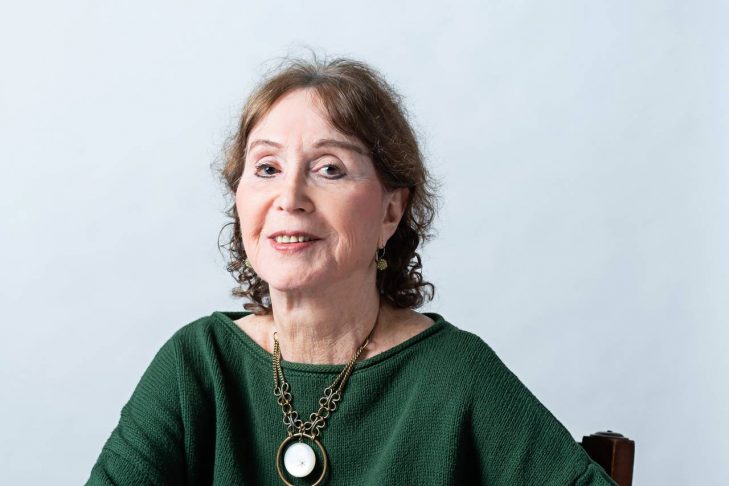 Judith Viorst, a journalist, psychoanalyst researcher, humorist and author of the popular classic children’s book “Alexander and the Terrible, Horrible, No Good, Very Bad Day,” is also the poet laureate of aging. She appeared at the JCC Greater Boston last month for a Jewish Arts Collaborative event talking about her new book, “Nearing Ninety (And Other Comedies of Late Life).” Viorst shared the stage with fellow humorist Bill Novak, who served as her charming host and interlocutor. Novak’s latest book, “Die Laughing: Killer Jokes for Newly Old Folks,” also serves as a related volume.

So, what happens when two very funny people discuss navigating the complications of aging? For starters, they solicit a lot of knowing nods and much laughter. Viorst began the evening with a description of “Nearing Ninety,” which is the seventh in her series of adult poetry books that dates back to chronicling her 20s. She has written these retrospective volumes every 10 years. Her newest book appears just shy of her 90th birthday. “I’m a slip of a girl at 88,” she declared.

Viorst said that when she proposed a book of poems focusing on subjects near and dear to 90-year-olds, her editor “gently advised me not to depress the living hell out of people.” She took that advice to heart and “managed to find the humor in what was a lot like ‘Apocalypse Now.’”

And humorous she is. “One of my mother’s favorite sayings when I was growing up—maybe it’s every Jewish mother’s favorite saying,” she told her audience of over 200 people, “is that as long as you have your health, you’re fine. When I was young, I thought that was the most pathetic, pitiful thing a person could say. Now I clink a glass of wine to health!”

Viorst went on to read poems corresponding to each decade of her life from each of her books. Novak provided the witty introduction and commentary to each mini-reading. For a poem from “When Did I Stop Being Twenty and Other Injustices,” Novak noted that Viorst was living the dream in Greenwich Village before it became commercial. She lived in a fifth-floor walkup in a building where Norman Mailer once attended a party. For her part, Viorst promised her parents she would only talk to men to whom she was introduced. She reasoned that if her parents were going to be sleepless and worried about her anyway, she might as well be in Greenwich Village.

“It’s Hard to Be Hip Over Thirty (And Other Tragedies of Married Life)” finds Viorst with a husband and children and living in the suburbs. To drive home the point that she has found true love in that decade, she watches football with her husband even though she’s philosophically opposed to the game. She muses it’s also a time in life that if her husband is late for dinner, “He must be having an affair or lying dead in the middle of the street. I always hope he’s dead.”

Novak observed that in her 40s, Viorst looked back and took stock in her book “How Did I Get to Be Forty (And Other Atrocities).” He noted, “You acknowledge that things change and that you and your cool college roommates have turned into women with matching sets of luggage.” In a poem that epitomized the decade for her, Viorst read a work called “Among Other Thoughts on Our Wedding Anniversary”: “When I felt pudgy or misunderstood or inferior to Marilyn Kaufman, who was not only a pediatric surgeon but a very fine person as well as beautiful … Or my mother-in-law got insulted at something I said, or my stomach got upset at something I ate or I backed into a truck that I swear when I looked in my rearview mirror was not there: It’s always been so nice to have my husband by my side so I could blame him.”

In “Forever Fifty (And Other Negotiations),” living on the edge meant going without sunscreen or skipping a day of flossing. As Viorst thought it over, she said, “You avoid exercising because not exercising seems to make you happier. You worry about your health, turning you into either a hypochondriac or someone who is just being sensible.”

In “Suddenly Sixty (And Other Shocks of Later Life),” Viorst observed that she created a new alphabet book: “A is for arthritis. B is for backache. C is for chest pain. We see what our mothers meant when they boringly said ‘as long as you have your health.’” And now when her husband fails to answer his phone, her first thought is not infidelity but cardiac arrest. “I know that I have reached a whole other stage,” she read.

When she reached 70, Viorst insisted in one of the poems from “I’m Too Young To Be Seventy (And Other Delusions)” that, “The woman I see in the mirror is not the real me.” Time, she observed, only slows down by having a root canal, an MRI or waiting for a report on a biopsy. In “Unexpectedly Eighty (And Other Adaptations),” Viorst quipped, “Our new friends may lack charm and spark, but they can see the road when it’s dark.”

At almost 90, Viorst admitted she wanted to have “glowing skin and impeccable thighs” again. She misses the attention she once took for granted. But she forges ahead and advises fellow nonagenarians to do the same. “We can sulk or make a life for ourselves of what is available,” she said. “There’s a lot of good stuff left.”

To reinforce the point, she ended with a poem proclaiming: “No stroke, no chemotherapy, and as of now dementia-free. What is there to complain about? Not much.”