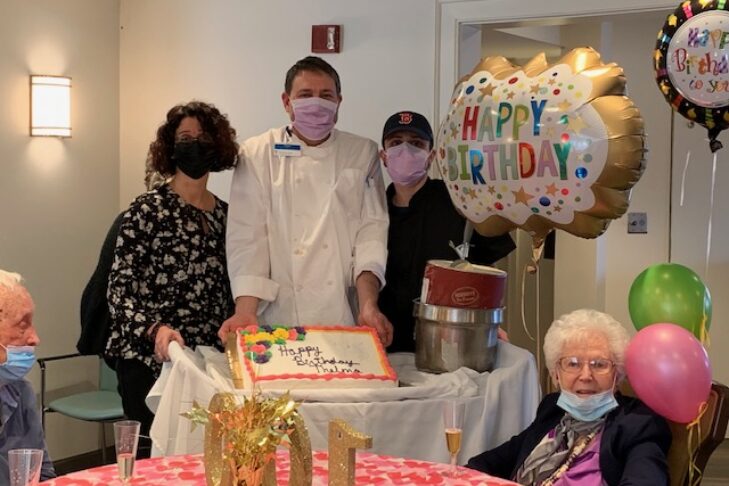 Accompanied by her children and grandchildren, Thelma was constantly on the go, urging the group to take every train and plane side excursion offered on the trip. As her son Joe Kropp noted, “She made sure we were busy all day long. In truth, she wore us out!”

Thelma Kropp Taylor, a resident of Harriett and Ralph Kaplan Estates Assisted Living, recently celebrated her 100th birthday. Her zest for life is very much in evidence. Born in Manchester, New Hampshire, on March 10, 1921, Thelma met her husband, Nathan Kropp, at the age of 26 at a cousin’s wedding. It was love at first sight. Proud parents of sons Joseph and Steven, the close-knit family enjoyed sports, trips, and restaurant outings. Sadly, Nathan died in 1959, only 11 years after he and Thelma were married. Thelma always valued education, instilling the importance of school and hard work in Joe and Steven. Since both her sons became lawyers, she obviously taught them well. The three enjoyed special family times and bonded over their love of good food. Joe has fond memories of his mom taking him and his brother out to dinner at such beloved Manchester restaurants as Puritan Backroom and The 88 Restaurant.

Thelma remarried in 1967 to Martin Taylor. The family, along with Martin’s son, Barry, lived in Peabody where Thelma was very active in the local community. She worked at Filene’s, and then Macy’s, well into her 80s. Thelma enjoyed traveling, most especially to Europe. At age 60, Thelma was widowed for a second time when Martin died in 1978. Thelma continued to raise her three sons alone, leading a busy and independent life. Thelma lived in the same house on Alden Road in Peabody for over 50 years.

When asked the secret to her good health and longevity, Thelma was quick to point out that she was born with “good genes.” All three of her siblings lived well into their 90s. Thelma is also a firm believer in exercise. She drove several times a week to Peabody senior center for senior aerobics into her 90s. Given that she looks years younger than her 100 years, whatever she is doing is definitely working!

Thelma was a popular figure at Kaplan Estates even before becoming  a resident. She attended Passover seders for many years. As a result, it was an easy transition when she decided to move into the assisted living five years ago. “Thelma is beloved by staff and residents alike,” said Andrea Hillel, executive director of Kaplan Estates, which is operated by Chelsea Jewish Lifecare. “She is such a warm, personable, and caring individual. It’s always such a pleasure to see her involved in so many activities. Thelma can often be found (pre-COVID) attending art and exercise classes, movies, concerts, and bingo.” Added Hillel, “Thelma is quick to offer a kind word or positive remark. In short, we all adore her.”

“My mom is truly an amazing woman,” said son Joe. “At age 95, she lived alone, was extremely independent, and still driving. Actually, she was an exceptionally good and safe driver!” Thelma’s family is pleased she’s so happy living at Kaplan Estates. “She has made many new friends,” said Joe. “My brother and I know she is well cared for, active, and happy. That’s really important to us.”

Joe commented that in her late 80s, Thelma would often say, “I think my age is catching up with me. Sometimes I even nap.” From all accounts, that sentiment appears to be far from true. Thelma Kropp Taylor is a vital, active, and sharp woman who just happens to be 100 years young.