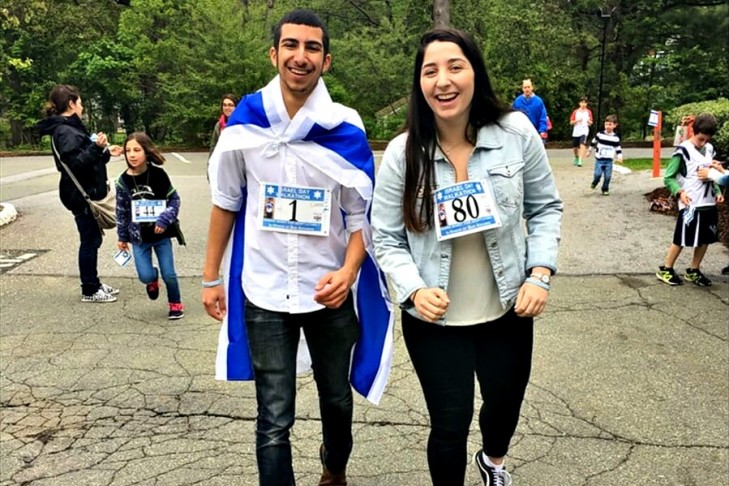 It’s been almost 10 months since we came here, which means it’s almost our time to go back home. But before we do, I wanted to share with you some of the things I learned during this year. A few weeks ago, Bar, my partner Shinshin in the Greater Boston area, and I met Barry Shrage, the president of CJP, at a gala event. We talked to him and at the end of our conversation he said to us: “Keep on shinshining!” I’m not sure exactly what he meant, but I see it as, “Take all you learned here and pass it on,” and that is my plan! These are the three main things I will take back with me, and would like to share with my friends and family in Israel.

1. “You can’t even understand a nod from the distance of our cultures.” This is a line I read in a book and I felt like it is the perfect way to describe the cultural differences I’ve experienced this year. It was on the Israeli Memorial Day (“Yom Ha’Zikaron”) that I really felt how different our lives are. I was on my way home from Marblehead, and in Israel the Memorial Day had already started so I listened to the Israeli radio on my phone. When we commemorate Yom Ha’Zikaron in Israel, all the TV and radio stations stop their regular shows to share stories of soldiers and families. While I was stopping at a red light, I saw three people who were moving a couch out to the street. I looked at them, while my radio played one of my favorite Yom Ha’Zikaron songs, and I was mad. Why aren’t you stopping? Don’t you know what day it is? But then I realized, they don’t.

I was working on an exhibit for my temple, Temple Isaiah of Lexington, that shows how we remember our fallen soldiers and those who got killed in terror attacks in Israel, and my host mom, Ilene, was going through what I put up. One of the stories I chose to share was the story of Shira Zur, who was an alumna of my scout troop back in Haifa. Three years older than me, she was killed in a terror attack in Jerusalem last year. When Ilene read the story, she told me that for her, it is so hard to imagine that everyone in Israel knows someone, or knows someone who knows someone. In the U.S., the army is something you honor very much, and the veterans get the respect they deserve, but for most people, it’s not something personal. That is one gap I was trying to bridge over this year.

2. “Tzedek, tzedek, you shall pursue,” Deuteronomy 16:18. I don’t remember the exact moment I realized this was the thing I love and appreciate most in the Jewish community of Greater Boston, but I can tell you without a doubt, the best thing this community does is pursuing justice. The Rashi School, one of the day schools we work in, has a beautiful program called “Tamchui” that they run every year before Purim. As part of this program, members of the Rashi community choose five organizations that they want to donate to. All the organizations are nominated by students, their families, staff and alumni. Then, for a week, the whole school (K-8th grade) study about these organizations, and it all sums up in one day where each student brings his or her own tzedakah to donate to an organization that he or she chose. I was lucky enough to be involved in this process this year, to see all the different charities that were nominated and to see how excited the students were to learn about them and to help them.

The last day of Sunday school in my temple is dedicated every year, for the past 25 years, to doing tikkun olam, repairing the world. The day starts with a short ceremony thanking all the teachers and temple staff, and then there are more than 20 different volunteering projects run all around temple and Lexington by members of the community. The project that inspired me the most was collecting school supplies for children of immigrants who don’t have enough money to take care of that on their own. The reason I found this project so inspiring was that the person who came up with it and ran it was a 12-year-old girl. I was so amazed to see the effect of growing up in a community that teaches you that one of our obligations as Jews is to make the world a better place.

Now don’t get me wrong. I’ve learned about social justice in Israel. We had volunteering hours during high school and I was a member in a youth movement in which one of the core values was social justice, and still I never felt as passionate about it as I do now. It might be just one more change I made this year as a result of growing up, but I want to thank this community for teaching me I can change the world.

3. “It’s hard for two shells to have a real conversation because every one of them is listening to its own sea,” another quote from a book. Now, let’s talk politics.

One of the things that probably scared me the most about coming here this year was that I haven’t quite figured out my political views. I was worried I wouldn’t know what to say when people asked me difficult questions, and if I would only be sharing facts and not what I think as a young Israeli, how would talking to me be better than reading these facts online? It wasn’t long after that I realized that the fact I haven’t yet figured out my political views is actually something good. I was always willing to listen and I could find parts I agree with with almost everyone I talked to.

Bar and I were very lucky to attend the AIPAC conference in Washington, D.C., earlier this year, but we were equally lucky to meet with a woman who works at J Street. We met with college students who were very passionate about Israel and with some who weren’t. We met adults who go to Israel every year, and parents who last visited Israel as high-schoolers because they are struggling with it. It was so important for me to see this diversity. In Israel, a lot of people think all American Jews support Israel, as if they all had the exact same opinion, and now I know it is much more complicated than we think. I still can’t say whether I’m left wing or right wing, but I can say I know the importance of Israel to the Jewish people, and the importance of the Jewish people to Israel.

Before I’m hopping on my plane back to Israel (I still have some more time), I wanted to say thank you to everyone who takes part in this wonderful partnership—to Ruth Kaplan and Sara Eisenberg, our supervisors, to CJP, the Boston-Haifa Connection and especially to the Living Bridges Committee. Thank you to our amazing work places, our schools, our synagogues and to our one-of-a-kind host families! Thank you to the whole community for teaching me so much this year, about myself, about Jewish life and about the world.

Along with her partner, Bar Argaman, Shira Becker has served the Jewish community of Greater Boston this year as a young Israeli ambassador, or in Hebrew as a “Shinshin.” The program is a partnership between CJP’s Boston-Haifa Connection and the Jewish Agency for Israel. Shira will be working as a counselor at Camp Eisner this summer before returning to Haifa in August to begin her mandatory military service in the Israel Defense Forces.