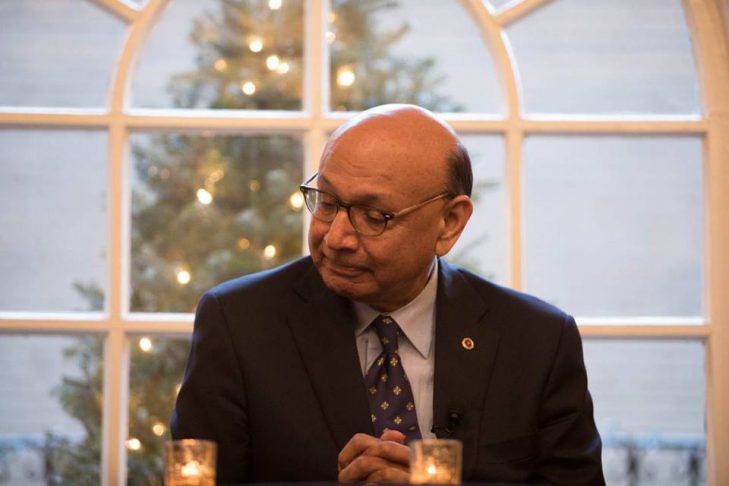 According to Talmudic legend, there are at least 36 righteous people in every generation whose good deeds keep the destruction of the world at bay. These people are called lamed vavniks—an appellation that comes from the two Hebrew letters—lamed and vav—that make up the wonderful Jewish number 36. In other scenarios, 36, a multiple of 18, which spells out “life” in Hebrew, stands for double fortune.

Lamed vavniks are scattered throughout the Diaspora, and there’s a group of them in every generation. A point of information: a lamed vavnik is too humble to think of him or herself as one of the anointed 36. He or she is also anonymous. But we can have a fairly good idea about who the lamed vavniks among us are.

It’s not a big leap of faith to suggest that Khizr Khan is such a person. Mr. Khan is the Gold Star parent who, supported by his wife, Ghazala, impressed the world with his fervent love for the United States and his reverence for our Constitution. His son, U.S. Army Capt. Humayun Khan, died in 2004 protecting his unit from a car bomb. I will never forget Mr. Khan holding up his personal copy of the Constitution at the 2016 Democratic National Convention and imploring the world, and Donald Trump in particular, to read it.

Mr. Khan, an attorney, was in Boston last week to speak to 1,500 middle-school and high-school students attending the Anti-Defamation League’s 23rd Annual New England Youth Congress. Mr. Khan said he was humbled by the opportunity to stand in front of so many young people. “I want them to walk away from this convention with the full realization that they are our future,” he said. “They are the custodians of the goodness of this country.”

At an event the night before, Mr. Khan spoke to a smaller group of Jewish and Muslim leaders. Soft-spoken yet forthright, Mr. Khan is a spokesman for our national conscience. “I am a witness,” he said, “to personal, intimate conversations in which America remains a beacon of hope for the rest of the world regardless of what is taking place inside our country. How can we give up? We are all patriots.”

He pulls no punches when he talks about “tyranny in Washington,” or when he compares the content of the president’s speeches to Nazi rhetoric. “You will be amazed,” said Mr. Khan, “at how fear of immigration, fear of the other, was exploited then and is exploited now.”

As I reflect on Mr. Khan’s patriotism, I have come to understand that he’s an avid student of history who looks toward the future. In his wide-ranging remarks, he noted: “I remind myself loudly that this bigotry and hate in my county is nothing new. The most vulnerable community is always attacked. In 1882, it was the Chinese community subject to indignities in the Chinese Exclusion Act. In 1942, it was the internment of Japanese Americans and the indignities and crimes committed against them. In 1939, the [German ocean liner] St. Louis brought my Jewish brothers and sisters ashore from persecution only to be declined entrance to this county, fully knowing the fate of those wonderful men and women. The reason I remind myself is that now it is the Muslim’s time to be subjected to this un-American hate.”

During the course of his remarks, it became clear that people want to confide in Mr. Khan. He recalled that a Latina-American who recognized him on the street in Washington, D.C., had to share the fact that her 10-year-old son found the strength to confront his bullies after watching Mr. Khan’s speech at the convention last summer. A retired army nurse who served in World War II wrote him a 26-page letter encouraging him to continue to speak out so the atrocities she witnessed would never happen again. A hand-delivered envelope that he found in his mailbox turned out to be from a fifth-grade class, fearful that their Latina friend would be deported. That last incident was reported in the press. The story caught the attention of Hillary Clinton’s staff, and they extended an invitation to the Khans to speak at the convention.

Mr. Khan said he and his wife were reluctant to step into the spotlight. But for two days—in a small room in their house in Charlottesville, Va., that they have dedicated to their fallen son, who was just 27 when he died—they considered whether to accept the invitation to speak in Philadelphia. During that contemplative time, they realized they were safeguarding the stories of people who had to be heard.

After Mr. Khan spoke, I went up to him and shared the story about the legend of the lamed vavniks. I told him I thought he was one of those 36 people. He bowed slightly and said, “I think you are describing my son.”