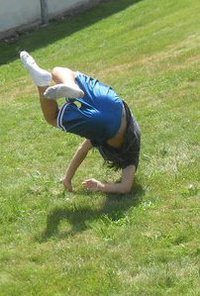 My son is turning fifteen this week.  I can’t wrap my brain around that number.  Somehow, fourteen still seemed like a child, but fifteen is . . . well, let’s put it this way:  he’s only got one more verse of “The Circle Game” left after this next one.

But there is something even more frightening to me about realizing my son is a bona fide teenager than how old it makes me feel.   Teenagers do things that are not always advisable, to put it tactfully.  We all have heard stories about “car surfing,” “hook-ups,” “sexting,” and now there is “textortion” (predators who get hold of explicit photos sent by text message, then threaten to reveal them unless the victim sends more photos).  Many parents take a defeatist attitude about stupid teen tricks. I have debated with more than one friend the notion that teens are going to drink anyway, therefore parents should let them drink at home and make sure they don’t drive (I disagree, but that’s another article).

Why are teenagers so attracted to risk?  Is it peer pressure?  Are they reacting to the overwhelming stress put upon them by the demands of their parents and teachers?  Could it be in their very DNA?  An article by Scott Edwards in the Spring 2010 issue of On The Brain suggests that understanding the consequences of risky behavior requires a level of cerebral development not attained until the early twenties or later.  Newer technologies like functional magnetic resonance imaging (fMRI) have enabled scientists to explore the formation of neurological connections in the brains of young people, and revealed that not every part of the brain develops at the same pace.  The article details how, according to Neurologist Frances Jensen of Children’s Hospital Boston, this impacts decision making:

“The frontal lobe is the seat of executive function, a term for the cognitive processes that allow us to plan, make decisions and judgments, formulate insight, and assess risk.  The delayed maturation of connections to the frontal lobe, Jensen says, contributes to teenagers’ risk-taking.”1

So what am I to do?  My son already believes me to be overprotective on the order of Sophie Portnoy and at some point, I have to let him stand or fall on his own.  It takes an enormous leap of faith, even for a professional Jew like me, given what we now know about the limitations of the adolescent brain, to allow children to go forth into the world without some protective bubble around them.  What makes this so much harder is that the teenagers themselves don’t realize how endangered they are.  They feel themselves to be, not just adequately knowledgeable, but downright superior in their sophistication and comprehension, compared to the dolts who fuss around them.  Of this phenomenon Mark Twain observed, “When I was a boy of fourteen, my father was so ignorant I could hardly stand to have the old man around.  But when I got to be twenty-one, I was astonished at how much he had learned in seven years!”2

In this week’s Torah portion Ki Tetzei, the Torah speaks of the stubborn and rebellious son who does not heed his parents.  He is to be taken by his mother and father to the elders at the town’s gates “and all the men of the town shall stone him to death.” (Deut. 21:21)  What did he specifically do to warrant such a punishment?  According to the text, he did not obey his parents, he ate and drank to excess.  To us, and indeed, to the Talmudic sages, this seems to be a disproportionate response to a wayward child.  Thus, it is argued, the punishment was for the future crimes this no-goodnik would surely perpetrate should he be allowed to live.  This raises a host of philosophical and ethical questions about judgment and free will.  If my nature is such that I am destined to commit crimes, what is the point of trying to educate me to walk the path of goodness?  And if I have no choice about such things, for what reason did God create me?  Moreover, how is it that my fellow human beings are charged with executing justice upon me for what only God can foresee?

The sages’ response to these questions is sufficiently broad, but allow me to focus on one answer.  A famous baraita declares that there are so many unique and onerous conditions that must be met before the rebellious son can be stoned to death that the intent of the Torah is to not ever allow for the carrying out of this sentence.

One particular condition that resonates with me is that the parents have to both accuse their son with one voice and also must have tried to instruct him with one voice.  Anyone who raises a child with a partner will immediately see the absurdity of this restriction.  When my husband comes down hard on my son, I immediately come to his defense.  When I lay down the law, Daddy plays “Good Cop.”  My husband and I were raised in two completely different cultures.  Our role models and expectations for how parents discipline children may be equally valid, but rarely resemble each other.  Not only do we not speak with one voice, sometimes we don’t even speak the same language.

So why include this seemingly superfluous commandment if it is not intended to be taken literally?   To make it clear that it is not for the human court to judge the future deeds that are only known for sure by the heavenly court.  And If one could be tried and convicted for crimes not yet committed what would be the use of repenting now?   Like the brain of a teenager, our souls are a work in progress.  No one is irredeemable or beyond repair.  In this month of Elul, this season of turning, we must not be afraid to cast off the masquerade behind which we hide our true selves for fear that what we will find is so pathetic, so base, so selfish.  The work of repentance challenges us to let go of our own insecurities and have faith that we can still grow.  As we hear over and over in our liturgy of the Days of Awe, “I seek not the death of the sinner, but that he turn from his way and live” (Ezekiel 33:11).

Our sacred texts describe God as an anxious parent worrying about His children.  God gave the Torah to teach and urge His children to do the right thing, that they should live and prosper.  We want the same thing for our kids.  We cannot guarantee that our teens will make the right choices for themselves; they have free will just like everyone else.  Some choices carry devastating consequences and we must do all that is in our limited power to protect our children from them.  We know, however, that many mistakes can be corrected, and that correction, not perfection, is the pathway to holiness.

2 Mark Twain, “Old Times on the Mississippi” Atlantic Monthly, 1874
Never miss the best stories and events for families, children and teens! Get JewishBoston Plus Kids.