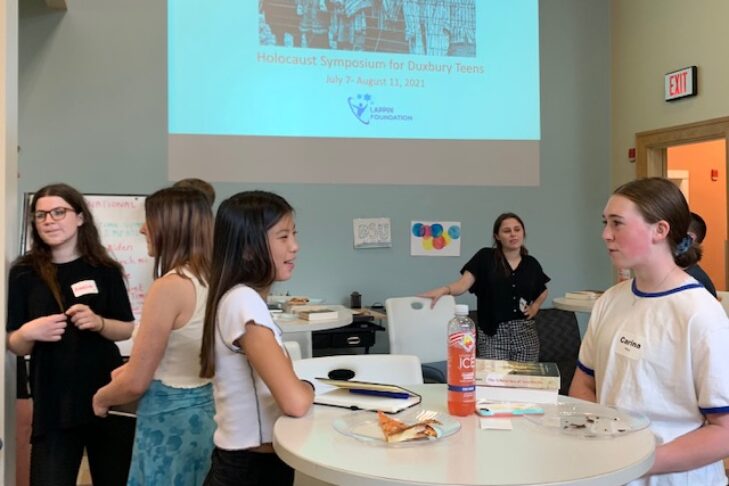 Eighteen Duxbury High School students, including players on the football team and student government leaders, have begun meeting weekly for Lappin Foundation’s Holocaust Symposium for Teens, which is implemented in partnership with the Duxbury Student Union and is endorsed by the Holocaust Legacy Foundation and by Salem State University’s Center for Holocaust and Genocide Studies.

The six-session symposium includes: Holocaust education; meeting survivors, including Dr. Hans Fisher from Newton, who was a passenger on the MS St. Louis, and Dita Kraus, known as the librarian of Auschwitz; a day trip to the U.S. Holocaust Museum in Washington, D.C.; a book read; and personal reflections. Deborah Coltin, the Foundation’s executive director, is the facilitator, using curriculum she developed to engage and educate teens about the Holocaust, as well as empower and equip them to respond to antisemitism.

“When Sue Bradford, executive director of Duxbury Student Union, was approached about Duxbury being the pilot community for the symposium, she embraced the idea,” explained Coltin. “In 10 short days she filled the spots.”

The Holocaust Symposium for Teens is free for schools to host because of generous funding from donors. Two more schools have already applied to host a symposium in the fall, with more applications expected in the coming months. The idea for the symposium was sparked by the recent findings of the Claims Conference survey of the alarming lack of Holocaust knowledge amongst millennials. The rise in antisemitism locally, nationally and around the world underscores the need for Holocaust education.

Schools can apply here to host a Holocaust Symposium for Teens.