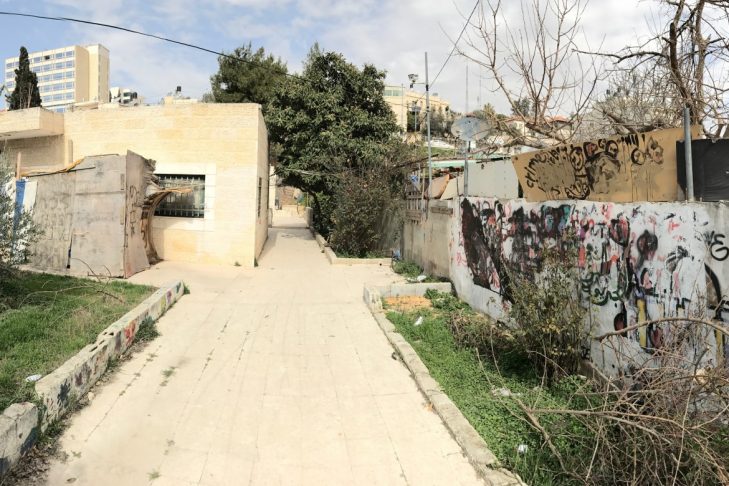 Last month I had the opportunity to spend four days traveling in Palestinian Authority controlled areas of the West Bank, and in Jerusalem neighborhoods with Palestinian majorities. This opportunity was provided by Encounter, which invites American Jewish leaders to engage with Palestinian experiences and perspectives.

I found some familiar experiences: meeting co-existence activists in Bethlehem (including one we meet with on our JCRC trips); touring Ramallah and hearing from a member of the Palestinian negotiation team. I also had new experiences: visiting a refugee community near Bethlehem that I have often viewed from afar; walking through a security checkpoint that six weeks earlier I had viewed from the Jerusalem side during a security barrier tour; visiting Battir – a Palestinian village with ancient Jewish significance – abutting the Green Line that divided the area for nineteen years, but where the Green Line remained open so that villagers could continue working their farms.

I’ve been thinking a lot about two particular encounters:

A small group of us had tea in Bethlehem with a Christian woman. She was animated, her emotions heightened as she relates her experience. She is adamant that she knows no one who has engaged in violent resistance, she rejects it, even abhors it. But she asks us why she must pay the price for the violence committed by others, and suffer the consequence of Israel’s response; why she must live with a security barrier limiting her passage to the Jerusalem she knew fondly, and complicating travel to other areas of the West Bank beyond the Bethlehem area.

During our conversation it becomes apparent that – despite having met with many American Jewish groups over the years – this woman’s perception of our identity is wildly inaccurate. She does not understand the distinction between “Jewish” and “Israeli” or seem to know that we visitors don’t have a vote in Israel, or that most of us never plan to move here. She is shocked by our articulation of this nuance. Then she is eager to move on rather than explore this new information. She has an urgent need to resume her narrative and have us hear more about her experience.

My second experience was a walking tour with a resident of Sheik Jarrah. The neighborhood is just north of Jerusalem’s Old City, over the Green Line and inside the present municipal boundaries of Jerusalem. Our host was an academic and a mother of four. She was born in the home she lives in today – when the area was under Jordanian control. Her parents were refugees from what became Israel and, after 1948, Jordan resettled them in this neighborhood.

As a resident of the neighborhood, she and her children carry blue identity cards. Blue cards are for non-Israeli citizen Palestinian residents of Jerusalem. Her husband carries the green card of a West Bank Palestinian. She is indignant that he is not permitted to live with her in Jerusalem, that she is forced to visit him at his home in Ramallah. She is passionately angry about the Jewish presence in the neighborhood and about the Jews that, she tells us, have “stolen” Palestinian homes. She is frustrated with the quality of her municipal services.

There is more to the story of this neighborhood that she does not tell us, and that she may not even know: before 1948 Sheik Jarrah was a mixed Arab and Jewish neighborhood with a second, Jewish, name: Shim’on HaTsadik. In 1948 the Jewish residents were forced to become refugees themselves and move to the western part of the city; many of the homes Jordan provided to the new Palestinian residents were on Jewish properties.

This omission from the narrative doesn’t diminish the importance of her experience. Why, we ask, does she stay here rather than live with her husband? “This is where I was born. This is my home.” Why doesn’t she exercise her right to vote in municipal elections and use the power she has? “Because not voting is part of our non-violent resistance.”

I’m comfortable with the intentionally unbalanced nature of these experiences. For me – steeped in Israel education, with years of living in Israel and traveling here– this is another slice, another aspect of a place I care so much about. And sometimes we need to do a little quieting of our own narrative so we can really hear the narrative of another. Too few of us get to travel here and converse with these people. This may be in part because we lack opportunities to do so, but often, we’re simply not interested in the whole picture.

This is a familiar challenge and frustration. So many of us are insistent on sharing our narratives, but we have little interest in hearing those of others. We become enamored of those facts that affirm our biases, and we claim them as our narratives, while ignoring that which challenges our world views or forces us to look beyond our own stories. Even during this encounter I wondered what our conversations with Palestinians would be like if they included participation by Israelis I know, with their own experience of suffering and helplessness in the face of the second Intifada’s attacks; violence that the security barrier almost completely halted. I wonder if those two narratives, side by side, could find some common narrative that could bridge the divide between them.

Encountering Palestinians doesn’t undermine my core commitment to achieving peace through a negotiated two-state agreement. Rather, it affirms it. This experience deepens my understanding of the complex challenges in achieving peace for both Israelis and Palestinians. And, it widens my appreciation for those innocents, both Israeli and Palestinian, who live daily with realities that come from the absence of peace; and who express an experience of having no personal agency in solving this.

A month later I am continuing to sit with the challenge and the frustration, but also with a hope: that by investing in coexistence and peace-building between Israelis and Palestinians, in time it may be possible to build at least one shared narrative in this place; of two people sharing peace.

And I am grateful to have had this opportunity.

Originally published on the JCRC blog.