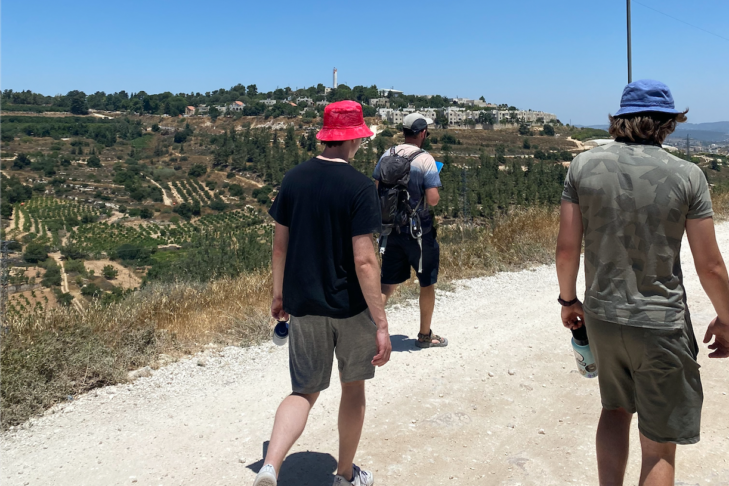 Our time in Israel has flown by much faster than I thought it would. Our most recent group program was this past weekend when we visited an educational community called Nitzana for our Shabbaton. Nitzana is a small community deep in the Negev desert right on the border with Egypt. The time we spent there was full of meaningful programming. Over the course of the weekend, we visited Kibbutz Revivim, the first Jewish settlement in the Negev that was founded by a small unit of pioneers during the British mandate period. Afterward, we went from Revivim to Nitzana itself and participated in team-building activities, discussed our Jewish identity and values, and even learned some Hebrew with our guide, Ido. We also spent Kabbalat Shabbat on the top of a hill overlooking the desert and some small towns nearby. Overall, the experience was full of meaningful moments and it felt good to detach ourselves from our internships and daily life in Jerusalem. We got to enjoy being in such an isolated location and our group became much closer over the course of the Shabbaton.

On Sunday, we departed Nitzana but did not go straight back to Jerusalem. Instead, we toured the cluster of Israeli settlements just south of Jerusalem called Gush Etzion. For me, personally, I was excited to visit because I had never been there before and was curious to see a part of the country with which I was unfamiliar. At Gush Etzion, we walked down an ancient road called Patriarchs Way, which dates as far back as the time of Abraham and Isaac. We also went to a memorial for Ezra Schwartz, a member of the Greater Boston Jewish community who was murdered by terrorists in 2015. That moment was particularly meaningful because a few members of our group knew him personally and many more of us were only a degree of separation from him.

We went to a nearby bakery where we were taught how to make pretzels, learned about the history of the bakery, and got some tips about how to run the best possible bakery (apparently, it’s all about the team you have). The last thing we did in Gush Etzion was visit an organization called Shorashim, which does peacemaking work and advocates for coexistence between Israelis and Palestinians. We met a Palestinian man named Khaled who told us the story of his life. Khaled and his family suffered many tragedies because of the conflict, but he turned his experiences into a mission to build peace between the many communities who share this land. At the end of our time with him, we were treated to a private concert by the famous Israeli musician David Broza, who loves the work that Shorashim does and wanted to play a little bit for them before his concert later that evening.

I’m glad that I have made good use of my time here and have learned a lot, worked hard on my Hebrew, and made great friends with whom I hope to stay in touch after we go back to the U.S.
Avi Gold, American University ’22, is an international studies major interning at Hebrew University of Jerusalem through the Boston Onward Israel program. 125 students from Massachusetts colleges have professional internships in their fields of interest in Tel Aviv, Jerusalem and Haifa this summer. Visit onwardboston.com for more info.