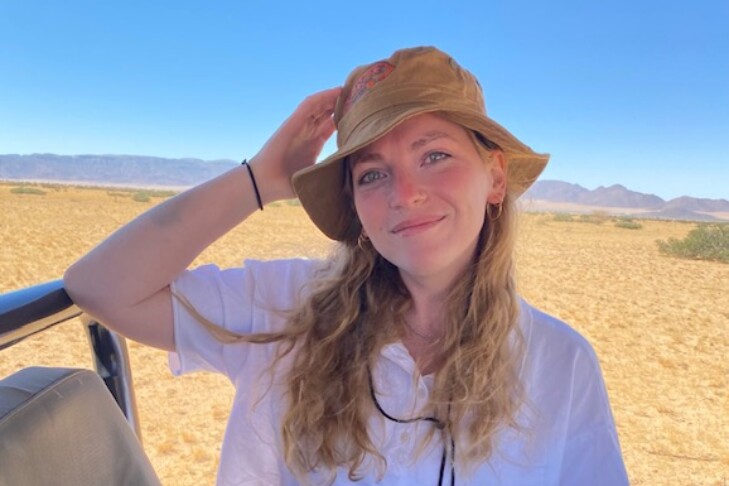 As she travels around the world this year on Remote Year, a travel program for American professionals, Hebrew College Ulpan is giving Tali Jona a sense of structure, community and connection.

Jona, a data and technology strategist from Chicago, is the only Jew on her 20-person program, where remote workers move to a new country every month. She had studied Hebrew as a child, and decided that her journey around the world was the perfect time to return to the language.

“Traveling and being away from my family and so many of my friends really made me miss feeling connected to a larger community,” said Jona, who graduated from Northwestern University with degrees in political science and Middle Eastern studies. “I’ve always loved studying languages. I felt particularly because I was traveling and I was one of the only Jewish people, that it was time to learn Hebrew. I wanted something that would provide routine and schedule when so much in my life is up in the air. That’s how I found Hebrew College’s Ulpan.”

Jona last studied Hebrew at Hebrew school in the Chicago suburbs. In high school, she switched to Spanish, and in college, to Arabic. She spent an undergraduate summer of college studying Arabic at Hebrew University in Jerusalem, and then the following year in Jordan, often returning to Israel to visit family and friends. She also spent a summer as an intern at IDC Herzliya, one of Israel’s leading academic institutes.

Jona chose Hebrew College Ulpan because she wanted an established program that was fully online. “I wanted a lot of resources; I wanted textbooks; I wanted a curriculum. I wanted to take it seriously,” she said. “So I did a little research and found Hebrew College. It met all of my needs, was online, which I loved, and there was a progression, so I knew that my journey with Ulpan wouldn’t begin and end with one semester. I would have a whole pathway ahead of me.”

And Jona says that while it has been a while since she last studied Hebrew, a lot is coming back quickly. She says her passion for Hebrew has been rekindled by her Ulpan class community, which is coincidentally all women, and especially with her teacher, Maya Dalzell, who she calls enthusiastic, supportive and “above and beyond so amazing.”

“There’s definitely a wide range of backgrounds with Hebrew, as well as with ages and locations and jobs. Everyone is coming from a different place, but it’s been so amazing getting to convene twice a week with the same group of women, to update each other on our lives and also learn Hebrew,” she said.

“And I think so much of my passion and love for Ulpan is so rooted in Maya, who has gotten me so excited to keep learning and traveling. I can’t imagine learning Hebrew with anyone else.”

So far this year, Jona has lived in Croatia, Portugal and Spain. She is now in Cape Town, South Africa, and she’s waiting to find out where her group is going next. As she travels, she’s had the opportunity to meet Israelis who are traveling and practice Hebrew. And now that Israel has opened up its borders to South Africa flights again, she hopes to take a side trip back to Israel to “put some of my Ulpan to use.”

“In each city I’ve been in, I’ve tried to find a couple of Israelis so I can practice my Hebrew, learn more about the culture and the slang and share what I learn with my class,” she said. “Everyone in my Ulpan class loves keeping up with my travels. They are very invested in my journey.”