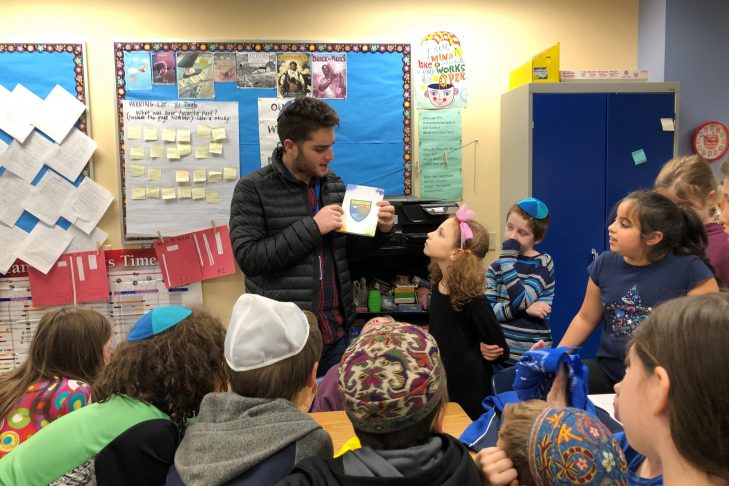 The following post was published in Mabat Nahariya, a local newspaper in Israel, featuring Boston’s Shinshin Young Ambassador Adar Gitsis. Adar, originally from Nahariya, is spending a year volunteering in the Greater Boston area before returning to Israel to serve in the Israel Defense Forces. Adar is serving with three other Shinshinim in Greater Boston and the North Shore this year: Nitzan Zacharia, Michal Sella and Sapir Uzan. Representing CJP’s Boston-Haifa Connection, they are working with over a dozen synagogue, day school and JCC partner communities across the region. The post was translated by Adar’s supervisor in Boston, Aviva Scheur.

“I left Israel as an Israeli and I returned as a Jew.”

So discovers Adar Gitsis, age 18, who previously was a student in the Rav Tanhumi School for the Sciences and Arts, and is currently doing a gap year of service in Boston, in the U.S., under the auspices of CJP’s Boston-Haifa Connection and the Jewish Agency for Israel. In an interview for “Mabat Nahariya,” Gitsis explains what this ambassador mission has given him up until now, and reveals that he has met with youth from Lebanon and Saudi Arabia.

After fulfilling important tasks for Israel’s national and youth council and serving as its spokesman, where he was very involved in the Rav Tanhumi School for Sciences and the Arts, where he studied, and was also selected as one of 70 of the most influential youth in our country, Adar Gitsis went to the city of Boston in the U.S. There he serves as an “Israeli Ambassador,” in a service year program that is a partnership between CJP’s Boston Haifa-Connection and the Jewish Agency. “I am going through an amazing experience which is hard to describe in words,” says Gitsis, who arrived recently for six days for interviews for his army service, with the goal of gaining a meaningful job in the Israeli army.

When I ask him how he was received in the Jewish community of Boston, Adar’s eyes sparkle, and he opens a lengthy monologue: “I arrived in Boston four months ago, and I have been received there with a love that is impossible to describe. I am living with an amazing American host family who helps me feel so at home. The Jewish community is exceptional, and I immediately felt the bond and huge support they have for Israel, something which is not to be taken for granted. During these four months, I have led many gatherings with various audiences, including youth, college students, adults and even seniors. In these meetings I speak about the culture and community in Israel, about current events and tradition and sometimes also help them learn the Hebrew language. I work mostly with schools, synagogues, youth movements and with any educational institution which sees fit to hear more and more about the diverse Israeli community.”

What additional things have you done there in the last four months?

“In addition to the fact that I have been exposed to a new culture and extraordinary people, I have planned and led different events, activities and educational programs with Jewish community partners with the goal of strengthening the bond with Israel. I have been surprised to discover how much Israel is valued in the world—such a small country, with such great accomplishments, which leaves a unique imprint on the whole world’s inhabitants.”

What goals and aspirations have you fulfilled until now?

“One of the goals that was important for me to fulfill this year was to touch a population and organizations which had never been exposed to Israeli culture in the past. I feel that I fulfill myself in the moment that I succeed in passing on a message to many people who would never have attached importance to the state of Israel or be interested in it. Many times, I feel that it has been my privilege to erase the stigmas and stereotypes that exist about Israeli society. The high point in my mission as an ambassador is to listen to different people, how thirsty they are to know more and more about the things that happen in our country, and their desire to be more involved in action on behalf of the State of Israel. It’s hard for me to even find the words to describe the experience that I am going through there. It feels like a roller coaster with extraordinary challenges and adventures. It is not always simple to be physically far from home. But the satisfaction from the work is worth it all. In addition, I experience things that would not happen if I hadn’t gone to Boston, like for instance sitting at the same table with a Lebanese young man, who is the grandson of the past Lebanese defense minister, and with a college student from Saudi Arabia. These are moments which I had never encountered in the past and I’m doubtful if I would encounter in the future. By the way, I also gave a talk on Israel to a group of Japanese college students.”

How much will this experience contribute to you and what tool kit are you equipping yourself for in the future?

“The experience and contributions that I am receiving are extraordinary. First of all, I’ve become a more independent person; I have learned to solve problems and work my way out of challenges on my own. I’ve been exposed to different ideological and religious movements, and I learned in depth about Judaism of the diaspora. I have also been exposed to interesting points of view which, without a doubt, will work to strengthen Judaism in the diaspora and the connection between Israel and the world also in the future. In this way, and also others, I feel like I left the country of Israel as an Israeli and came back as a Jew, and in my opinion, this is the biggest gift that I have received from my mission as an ambassador, until now. I have learned to understand how strong we are and how much ‘am yisrael chai’ the people of Israel are alive, in all places and in all times.”

What are your plans for the future?

“In general, my dream is to continue to be involved with journalism and public diplomacy.”