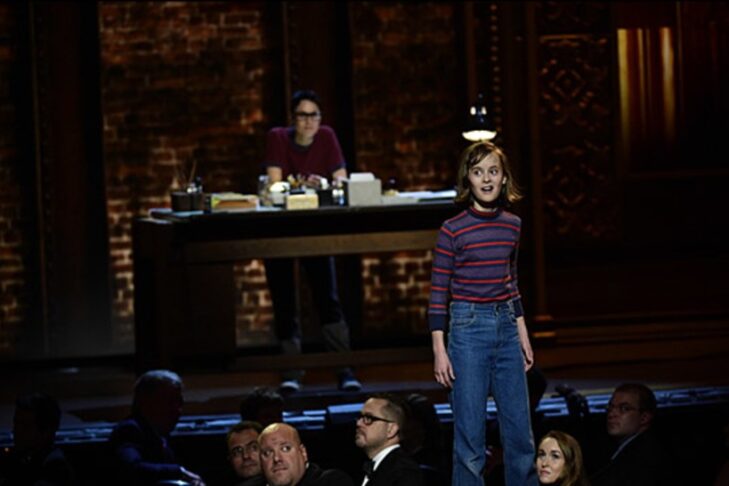 In the spectacular musical “Fun Home,” based on Alison Bechdel’s autobiographical graphic novel of the same name, Bechdel’s young avatar recalls watching a butch delivery woman wheel a handcart of packages into the diner where she sits with her father. Though Bechdel never speaks to the woman, she feels an instant kinship and performs perhaps the most well-known song from the musical: “Ring of Keys.” The term “ring of keys” has since been adopted to indicate a moment when a young lesbian, often closeted, sees a (usually butch) lesbian out in the wild and realizes there are deviations from the proverbial straight path.

I never had a traditional ring of keys moment. Gay women were few and far between where I grew up, though I knew lots of wonderful gay men. To my perception, masculine women were a curiosity at best, gender traitors to be mocked at worst. I didn’t even hear the word “lesbian” used in a positive context until I went to college, though I was already peeling back the layers of my own internalized homophobia from the second I got there.

Of course, people knew. Ollie, my wife, then friend, clocked me as a closeted lesbian right away, even as I grew my hair and dated a slew of men. Ironically, it wasn’t until I actually listened to “Fun Home” at 22 that I realized what I was. “Ring of Keys” was my ring of keys.

After I moved to Boston, where rainbow flags adorned church windows and I watched girls hold hands in public in unfettered awe, Ollie and I saw “Fun Home” performed live. During “Ring of Keys,” when Young Alison describes the delivery woman as an old-school butch, the enormous theater erupted into laughter. I had only been out for a few months, so thrilled to explore myself and my relationships in a relatively safe place, and I remember looking to Ollie in horror. The description was meant to be rapturous and intimate, but even at this lesbian musical in the home of Boston marriages, masculine women were a joke.

“It’s because butch is a reductive term,” said a queer former friend over tofu, and I very nearly left the table. “No,” I didn’t say. “I don’t think 3,000 people found a butch lesbian funny because she’s indicative of an outdated wave of feminism. I think they found her funny because they still think she’s a freak.”

This is not to say that feminine and femme lesbians don’t experience their fair share of prejudice. Gay women are often maligned no matter how they appear. But even now, being butch in public means being instantly recognized as someone who is breaking the rules of what it means to be a woman, a crime to be punished. I remember unwisely antagonizing two anti-gay protesters outside a drag show, and among other things, one yelled, “You need to grow out your hair and start acting like a real woman!” As if I was a beast in a badly tailored women’s suit.

Of course, he was wrong. I’m a woman, but just a different variety, and I love being recognizable in public. I love holding hands with my wife, two butches just existing in the world. I love the shy glances I get from kids as they recognize one of those deviations. The delivery woman probably never realized what an impact she made on Alison Bechdel, but her mere presence in that brief moment has brought self-actualization to so many. The unspoken understanding that it’s OK to feel how you feel, to know who you are even if it makes others uncomfortable. I may never be someone’s ring of keys moment, but then again, who knows? My existence means I got to this point OK, and that means you can get to this point OK, too.