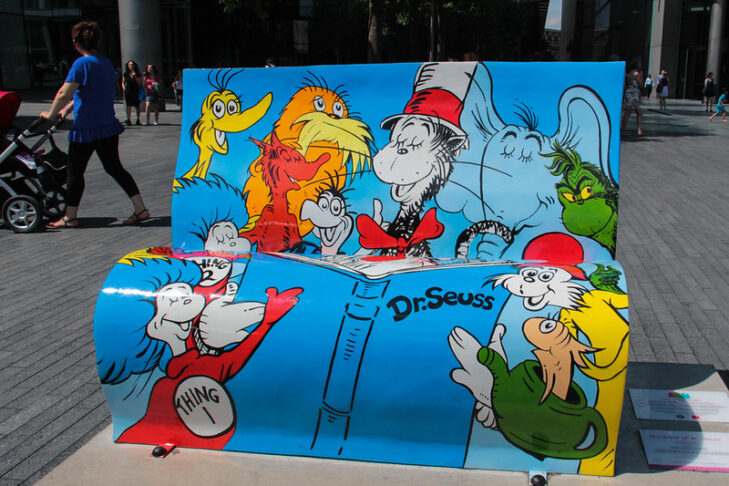 As everyone knows, the cancel culture has claimed its most recent victim in Dr. Seuss. Six of Dr. Seuss’s books were canceled, albeit self-canceled, by his foundation. However, let’s be honest—his foundation doesn’t believe he is a racist, nor do they believe his books foment hatred.

It’s just another example of a terrified and cowardly organization cowering in fear to the vicious woke mob. A group of people, as Bill Maher says, that should start standing their ground! Instead, they betrayed this great man, throwing him to the ground faster than you can say “green eggs and ham.”

Bravo, Dr. Seuss Foundation, bravo. Way to stand up to irrationality, insanity and bullying. “Courage doesn’t always roar,” taught Dr. Seuss. “Sometimes courage is the quiet voice at the end of the day whispering, ‘I will try again tomorrow.'” Well, courage definitely didn’t roar today, but maybe you’ll try again tomorrow. However, I will speak up and speak out on his behalf today. After all, Dr. Seuss spent his life standing up to injustice. It’s the least we can do.

This was no bigot. He was a true social justice warrior, not going after “the racist” Abraham Lincoln or “the antisemite” Shakespeare, but true evil, creating hundreds upon hundreds of cartoons and illustrations taking on actual racists, antisemites and haters—the ones he’s accused of now being.

This was a man who went head to head against Hitler in the pages of his art, such as in a Dr. Seuss book called “Adolf the Wolf,” a book that described Adolf as, “And the Wolf chewed up the children and spit out their bones…,” and over 400 publications targeting Hitler, Stalin, Mussolini abroad and racial bigotry here at home.

And yet, here we are, having to defend a man who spent his life fighting Jim Crow and Nazis. His good name tainted. His great art burned. His tremendous legacy questioned. Why? Because he is judged by impossible, utopian standards. He is being held to today’s consciousness of what is deemed woke and what is deemed racist. He is being tried by a hysterical woke mob that believes in burning books. And be warned: This is a mob that will be coming for you, too. Just wait. Someday your grandchildren will cancel you for driving a fossil-fuel-powered car, or sitting on couches made of animals, or throwing away plastic, or building nuclear weapons, or watching “Keeping Up With the Kardashians” (fine, for that we should be judged).

Today’s action against Dr. Seuss is nothing less than a witch hunt. What has transpired regarding his books is simply today’s version of a good old-fashioned book-burning. There are no bonfires involved, but it’s book-burning nonetheless. With the push of a button, books disappear right off your virtual shelf, up in virtual smoke. In the words of Heinrich Heine, however, burner beware: “Wherever they burn books they will also, in the end, burn human beings.”

Do you know who also burned books? Adolf Hitler. Guess what he burned next? That’s right, millions upon millions of innocent human beings, up in real smoke in the ovens of Auschwitz. And of those millions of human beings, 1.5 million of them were children. Burnt alive by real evil, by a real villain, a monster who should really be canceled. But guess what? He’s not.

Guess whose book you can find on Amazon? No, not Dr. Seuss’s “If I Ran the Zoo”; that one has too much hate. For $10.99 you can purchase your own copy of “Mein Kampf.” Yes, that’s right, Hitler’s manifesto on how to eradicate the “other.” The book about a fictitious zoo that celebrates diversity is banned. The book about real death camps, which eradicated diversity, is available. So, let me get this straight: Tonight you won’t be able to read to your child a heart-warming story about young Gerald McGrew who ran a zoo, but you can read an “oven-warming” tale of vile hatred, bigotry and evil—the real kind, not the stuff of children’s dreams, but children’s nightmares—1.5 million nightmares, to be exact.

I wonder if Adolf’s mommy would have read to him “If I Ran the Zoo,” would he still have become Adolf the Wolf, or a far more beautiful creature that brightened that zoo?

In either case, you can’t. You won’t find her. She doesn’t exist. Why?

Because Hitler was evil. And good never comes from evil.

Because Dr. Seuss was good. And evil never comes from good.

Because the woke mob, once again, has burned the wrong book, come for the wrong man, and canceled the wrong culture.

But it probably isn’t Sergeant Mulvaney in “And to Think That I Saw It on Mulberry Street.” And it definitely isn’t Gerald McGrew in “If I Ran the Zoo.” And it absolutely, unequivocally, is not Theodore Seuss Geisel, a man who devoted his life to fighting bigotry, hatred and evil. Dr. Seuss, a person who gave his lifeblood to delighting the imaginations of children, inspiring them that regardless of whether they had stars on their belly or not, it didn’t matter. He taught that they are all part of one race, the human race. They are here to make this zoo a better place. Dr. Seuss’s only goal was to have these children one day act in the way he suggests: ”Stand up and cheer, saying ‘WOW! What this zoo must be worth!/It’s the gol-darndest zoo/On the face of the earth!’”

Stand up and cheer for this man—don’t throw him under a car, a bus, a train or a plane!

Stand up and read his beautiful books—read them here and there and everywhere—but don’t burn them! Stand up to the injustice and immorality of the woke mob and stand up to cancel culture! For in the words of Dr. Seuss, “Unless someone like you cares a whole awful lot, nothing is going to get better. It’s not.”

This, my friend, is up to you and me. It’s time to really get woke—to wake up and heed the words of this secular saint: “You have brains in your head. You have feet in your shoes. You can steer yourself any direction you choose.”

In the spirit of Dr. Seuss, let’s end by saying: It’s time to stand up. It’s time to choose. If we cancel true evil, we all win. But if we cower to bullies, or cancel the wrong culture, or burn anyone’s books (even “Adolf the Wolf”), we all lose.