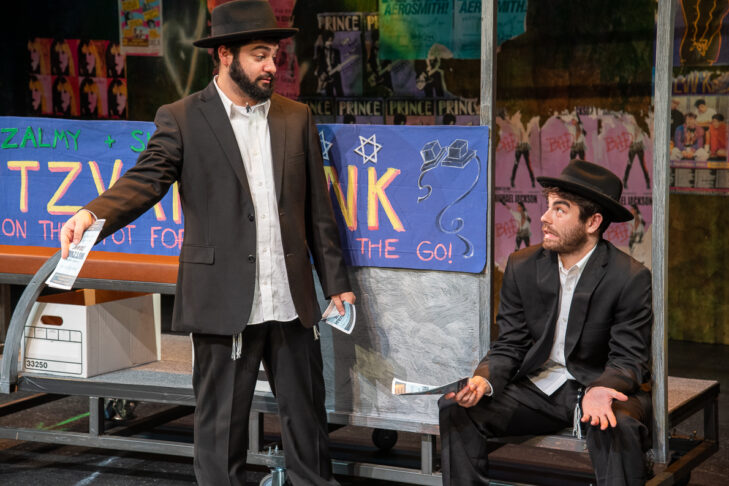 I’ve seen a lot of plays. Both of my parents acted before they were married, and my mother continues to this day. She rehearsed lines in the car, enlisting my sister and me to help her memorize long passages. We grew up hidden in dusty back stages, creeping onto forbidden sets, reading our own lines when we were old enough. My childhood was colored by an appreciation for local theater, so I jumped at the chance to attend the New England premiere of “Trayf” at New Repertory Theatre, produced in partnership with the Jewish Arts Collaborative. There, I met the cast and director Celine Rosenthal, and settled in for the one-act show.

“Trayf” tells the story of two young Hasidic men, Shmuel (David Picariello) and Zalmy (Ben Swimmer), and their journeys into New York in search of Jews willing to perform a mitzvah, or good deed. Along the way, they meet Jonathan (Nile Scott Hawver), a grieving secular music producer who only learned of his Judaism after his father’s death, and his girlfriend Leah (Kimberly Gaughan), a lapsed secular Jew. Zalmy takes Jonathan under his wing to Shmuel’s chagrin, and the developments that ensue are both hilarious and heartbreaking.

With such a small cast and the majority of the scenes taking place between two characters, it would be so easy for one actor to upstage another. Shmuel and Zalmy spend the most time together, with Shmuel as the straight man and Zalmy as the jokester, and the play could easily fall into tired tropes of Zalmy dragging his best friend into an endless parade of hare-brained situations. The sparse set could leave the audience bored. The script could become silly or stereotypical. 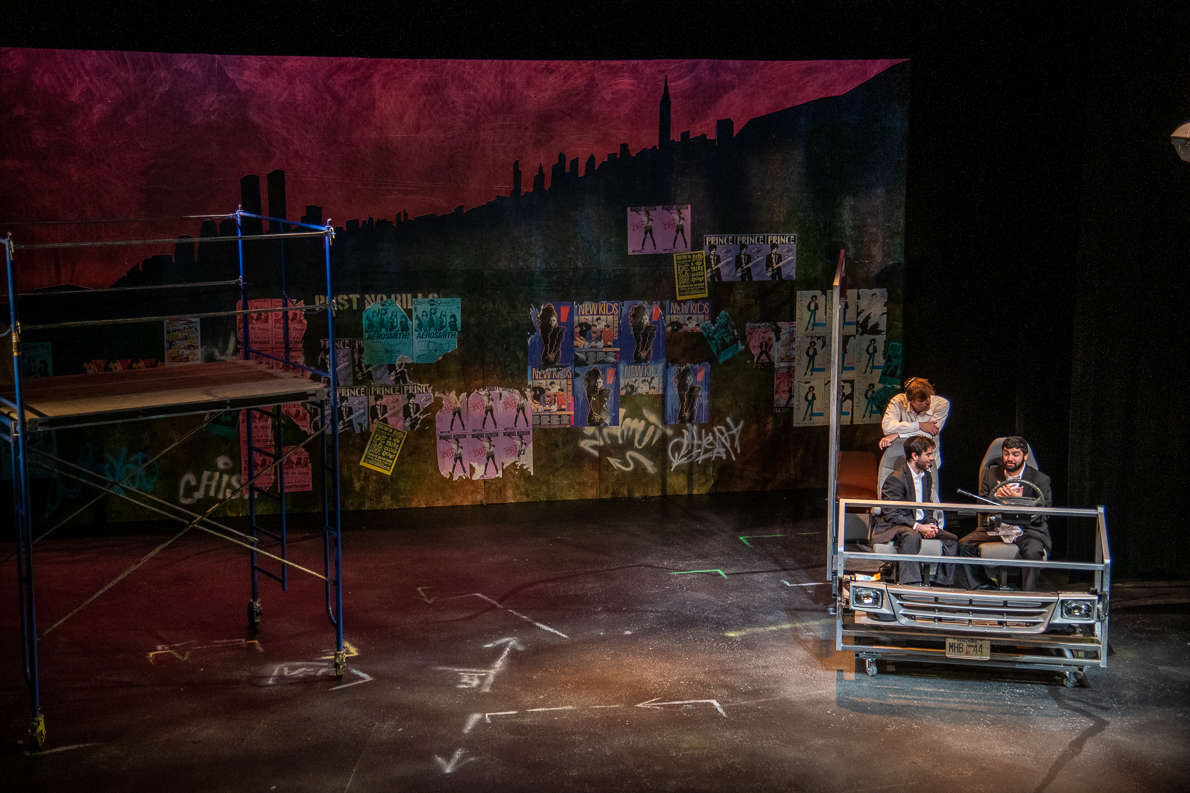 Shmuel is not the straight man. He is devoted to the rebbe and his position as the driver of the “mitzvah tank,” but he is also full of humor. He plays by the rules and believes albums of klezmer music should be listened to in order. He demonstrates a nuanced understanding of love but doesn’t know what sex is or how to perform it. Picariello portrays him not as a caricature, but as a confused, earnest 19-year-old who loves music and Judaism and his best friend.

And Zalmy is not the jokester. He is entranced by the secular world, confessing to Jonathan that he has a pair of jeans in his closet that he tries on at night. He listens to mixtapes, acts as the navigator and opens himself and his home wholeheartedly to Jonathan. Swimmer’s acting is all about nuance, about hiding uncertainty and fear under a thin, casual veneer. 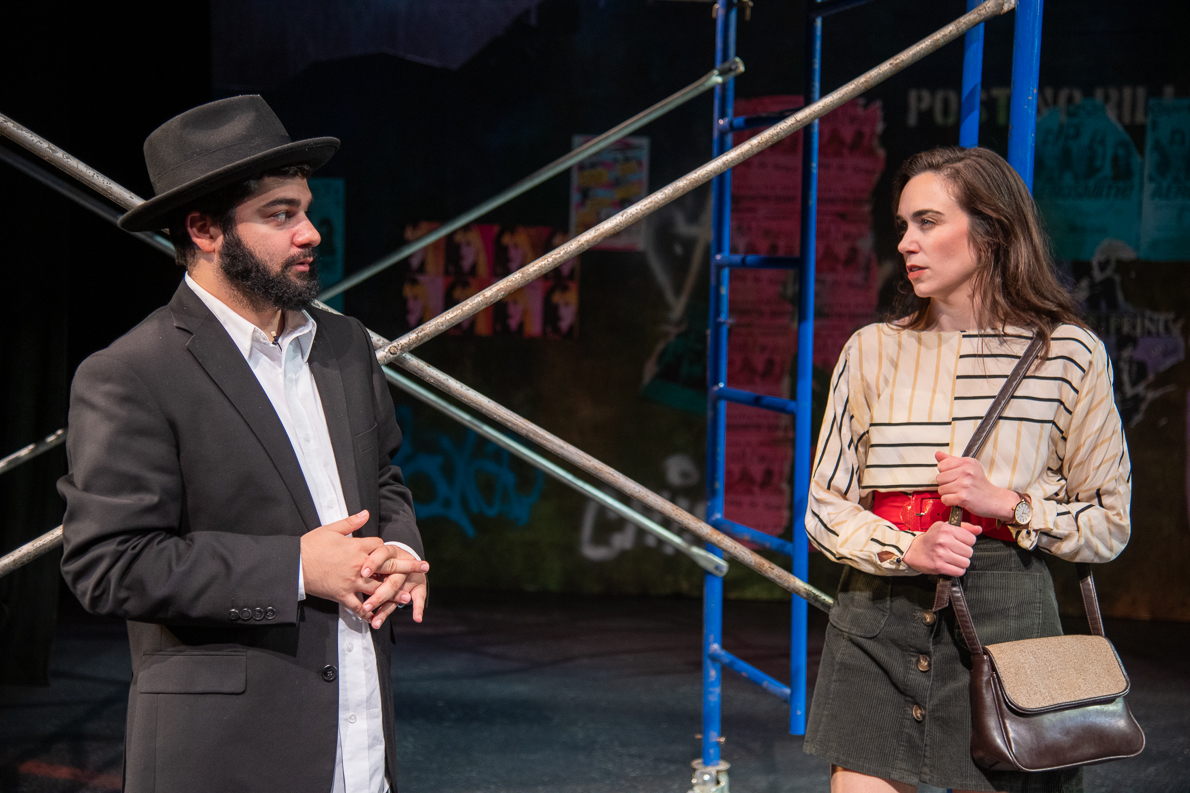 These two incredible actors captivate when they are together on stage. They are perfectly balanced, playing off each other with exquisite timing and energy that persists throughout the entire show. Their chemistry is palpable, especially when they are alone in the mitzvah tank, and the depth of the characters’ connection acts as a foundation for the story, which makes their rift that much more devastating. I found myself physically moved, gripping the sleeves of my jacket during some of their conversations, absolutely enraptured by what lay before me.

And Jonathan, the wedge. Played with sensitivity by Hawver, Jonathan is a picture of grief offstage. He throws himself into the Hasidic lifestyle to connect with his father, the depths of his obsessions explained by Leah in a conversation with Shmuel. Leah is the granddaughter of Holocaust survivors, delegitimized by her partner as he tries to explain her own religion to her. Her understanding of Judaism, she says, is that it is a “liability.” Gaughan is only onstage for a brief scene, but her performance opens the world beyond the limited scope of the other characters.

“Trayf” is a triumph. It contains so many moments where a lesser writer would have stumbled, but Joelle’s characters and Rosenthal’s expert directing bring a truly wonderful piece of theater to the public.