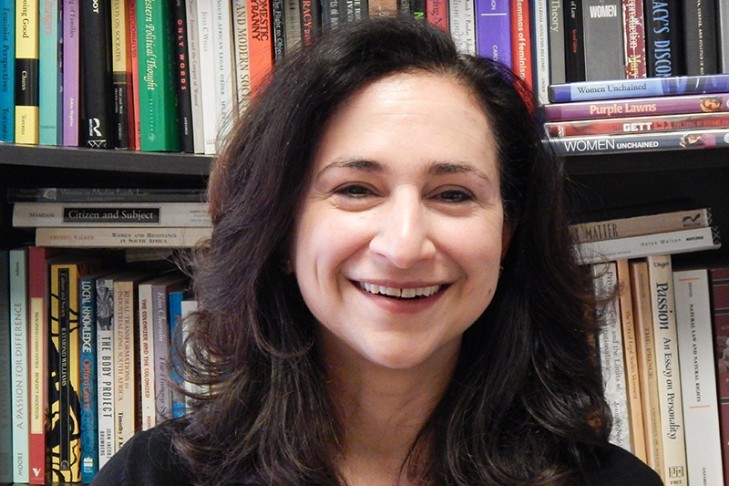 Listen to Lisa Fishbayn Joffe talk about her new job for just a few minutes and it’s clear how much she loves her work. Fishbayn Joffe is the next director of the Hadassah-Brandeis Institute (HBI). In her new role, she succeeds Shulamit Reinharz, founding director of HBI.

In addition to her much-lauded Jewish feminist scholarly work, Fishbayn Joffe is also trained as a lawyer with three degrees that include a doctorate in the philosophy of law from Harvard. In recent years, Fishbayn Joffe has focused on gender equality issues in family law. She has published myriad articles, as well as written three books on the subject. She recently spoke to JewishBoston about her ongoing projects with HBI and her goals for the future.

When did you come to the Hadassah-Brandeis Institute?

I’ve been at HBI for 10 years. Before that I taught law at University College London. My own work had been on gender, multiculturalism and family law around women’s rights, particularly in family law, and the challenges of respecting cultural traditions and responding to women’s claims for gender equality in their communities.

How does HBI’s mission dovetail with your research and academic interests?

At HBI I realized that we could create something to explore gender issues in the context of Jewish law. This idea led me to create a project in 2007 called “Gender, Culture, Religion and the Law.” There is a related book series encompassing those topics, as well as the annual Diane Markowicz Memorial Lecture on gender and human rights. I also helped to create the Boston Agunah Taskforce three years ago, which grew out of my research on women’s rights around Jewish divorce rights. The taskforce provides advice, education and support for women going through the religious divorce process in Boston. There is also a website women can consult—getyourget.com. For the past three years, our work on agunah rights has been supported by a grant from CJP’s The Miriam Fund.

What are some of the challenges your work presents?

I’m drawn to finding solutions for conflicts between women’s rights and religious law that recognize women don’t necessarily want to exit their communities. Women often want to be embedded in their communities and meaningfully engage with their religious traditions. My doctorate in juridical science work explored family law in South Africa after apartheid, and how the new constitution could respect women’s rights. A few years later I came to a conference at HBI, which was co-sponsored by the Jewish Orthodox Feminist Alliance, and realized we hadn’t turned a gender lens on the Jewish experience. HBI’s mission is to recognize that the experience of Jewish women is an important subject for scholarly research. In that regard, I am a prime example of the influence of HBI!

What do you hope to build on at HBI?

I want to continue to do what HBI has done so well for 20 years—to explore the history and experience of Jewish women. I want to promote the use of a gender lens as essential to the work of the field of Jewish studies. I also want to continue to support Jewish gender studies, which HBI does through our book series and various programs. We also give out small financial awards to people all over the world who are doing research with a gender lens. And we invite scholars to stay and work with us at HBI.

What new initiatives do you want to cultivate at HBI?

Going forward, I would like to do more work on LGBTQ issues, particularly on the experience of transgender people. As part of our book series we are publishing a book on transgender theology by Joy Ladin. We also want to build on fostering interreligious dialogue—one of the important byproducts of the work that the project on gender, culture and law has done so well.

As an example, we’ve brought together religious feminists from the Jewish and Muslim communities to identify effective strategies. But we also recognize that the dialogue itself is a very valuable thing we are creating. I want to focus more on creating those opportunities for dialogue and connection across differences. I think you can learn a lot from other religious traditions dealing with the same challenges by sharing best practices.

The theme of our work in the coming year is going to be on gender, migration and refugees. There are important lessons to be learned from Jewish attitudes toward welcoming the stranger. The Jewish experiences of migration and refugee status can help us think about the challenges that everybody faces today. This is something we can offer Brandeis, the Jewish community and the broader community.