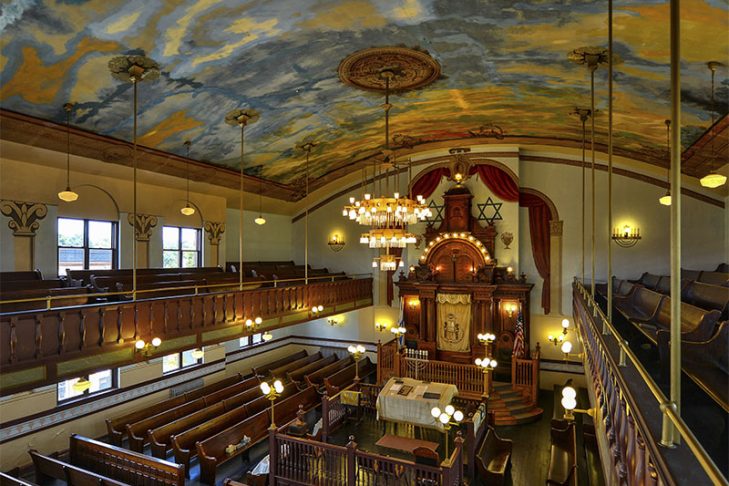 My Spanish is slipping away from me. My bilingualism was stronger in childhood. But some of it came back to me in full force during a recent bus tour of Latino-Jewish Chelsea, sponsored by the Anti-Defamation League of New England’s Latino-Jewish Roundtable. And I, a hyphenated Cuban-American, a hyphenated Cuban-Jew, a Spanglish speaker these days, was eager to see the mixing and melding of cultures that has been happening for over a century in Chelsea’s 1.8 square miles.

Tucked underneath the Tobin Bridge, Chelsea is eight traffic-free minutes away from the center of Boston. For the past three decades it has been a mostly Latino enclave that has recently welcomed Somali and Asian immigrants. It clings to its image as a gateway into America for the poor and the oppressed.

Two representatives from Chelsea’s Latino and Jewish communities guided the tour. Gladys Vega, the executive director of the Chelsea Collaborative, impressed the 25 participants with a bittersweet yet hopeful history of contemporary Chelsea. Vega, 49, is a dynamic woman dedicated to her community. She came to Chelsea from Puerto Rico when she was 9 years old and joined the Collaborative in 1990. In 2006 she became its executive director. “The Collaborative,” she noted, “is the only Latino-led multi-service program in Massachusetts. It presents issues that the community needs to address, including tenants’ rights, summer employment for teens with disabilities, and workers’ rights. We’ve rebirthed ourselves many times.”

Throughout the tour, Vega’s Jewish counterpart, Ellen Rovner—a Chelsea native and cultural anthropologist at Brandeis University—pointed out the “naked absence” of Chelsea’s once-thriving Jewish community. With one quick stroke, Rovner’s anthropological term pointedly demonstrated that there were no overt signs of the Jewish population of Chelsea. But there are still symbolic intersections of the two cultures. These days, Pollo Campero—a fast-food chicken chain that originated in Guatemala—is around the corner from Katz Bagel Bakery. Katz’s survival proves that Chelsea hasn’t so much erased its Jewish past as it has added layer upon layer to it.

Boston’s Jews began migrating to Chelsea after the Great Fire of 1872. Across the river, fire codes were laxer and more advantageous to Jewish businesses in the rag (or shmata) and scrap-metal trades. According to Rovner, Jews thrived in those businesses until the onset of World War II. There was also a vibrant district of Jewish-owned stores that were traditionally open on post-Sabbath Saturday nights until midnight, when the smell of Katz’s fresh bagels wafted through the air.

At the height of Jewish life in 1920s Chelsea, there were somewhere between 18 and 22 synagogues in operation, and Jews made up over 80 percent of the city’s population. The first synagogue began in a tenement in 1866. On the bus tour there was a stop at Congregation Agudath Shalom, also known as the Walnut Street Synagogue, one of two synagogues still holding services in Chelsea. The Walnut Street Synagogue is an imposing edifice. It was built in the glorious style of European synagogues, with the bima, or stage, in the center of the synagogue. Today only 50 paying members scatter among the synagogue’s 1,100 seats. Dues are $40 a year, and the synagogue relies on donations and support from the greater Jewish community to keep its doors open.

But for all my affinity to things Jewish, Chelsea’s old-time Jewish community is more quaint than familiar to me. I am the daughter of Cuban immigrants on my mother’s side and highly assimilated Jews on my father’s side. By 1913, my immigrant grandfather had a degree in civil engineering from Yale University. In the early 1960s, my mother’s immediate family fled Cuba and joined my mother, already married to my father, in the United States. When Gladys Vega described a particular kind of homelessness in Chelsea as 20 or more extended family members would cram together in a two-bedroom apartment, I remember how my Cuban relatives briefly lived together in a double-decker in Hartford, Conn.

But the reality is that my family had the resources of the Jewish community and had come from Cuba already educated. They also had the goodwill of the American government—something today’s Latino communities largely do not have. After a few years, like many Jews my Cuban family was part of the national major urban demographic shift of the 1960s to the suburbs.

As I looked around the Chelsea Collaborative I noticed that words like “struggle,” “triumph” and “challenge” were prominent on urgent posters in Spanish about fighting for social justice and human rights. I didn’t immediately recognize some of the words. My Spanish vocabulary, more for the lovelorn, comes from translating American soap operas into Spanish for my grandmother. But the context is always there, and so are the familiar struggles of two peoples separated by history.