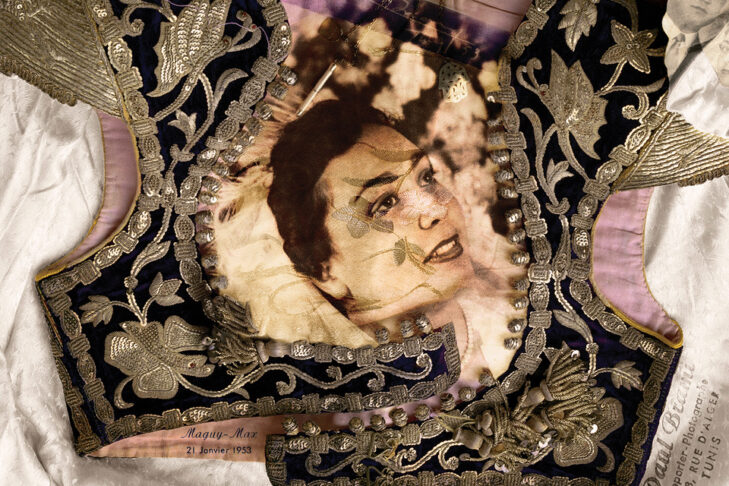 Leslie Starobin intentionally describes herself as a photographer and montage artist, rather than a collagist. She explains that the word “collage” comes from the French “coller” and infers the act of cutting and pasting. As Starobin pointed out, she rephotographs the images and objects she has accrued for her exhibits. The process, detailed and meticulous, is notable in her signature project, “The Last Address.” The textured photographs depict Starobin’s interpretative montages of Jewish exile and immigration over the past century.

The genesis of “The Last Address” is connected to Starobin’s family history. Starobin had inherited a box of photographs from her grandmother, and in the mix was an envelope with a Kiev, Ukraine, address. It was the address to which her immigrant grandfather was sending money from America to his Ukrainian relatives. However, the correspondence abruptly ended; the last letters returned with the notation that the addressees had moved.

It is often challenging to work with the inevitable gaps in family histories that are handed down. Starobin noted that many of these stories’ details are lost forever. “I use the little bits of stories that I have and research the history [of these immigrations],” she said. “Many of the people featured in ‘The Last Address’ experienced multiple family immigrations that started in Europe or the Middle East.”

Starobin’s process includes curating objects and pictures amplifying her subject’s oral histories. In a photographic montage Starobin calls “Maguy – Max, 21 Janvier,” her still life features Maguy Marek, a Tunisian bride who dreamily looks at her groom and seemingly toward the future. Starobin has included the photographer’s stamps on the photo and has displayed the bolero Maguy likely wore for a henna ceremony before her wedding. 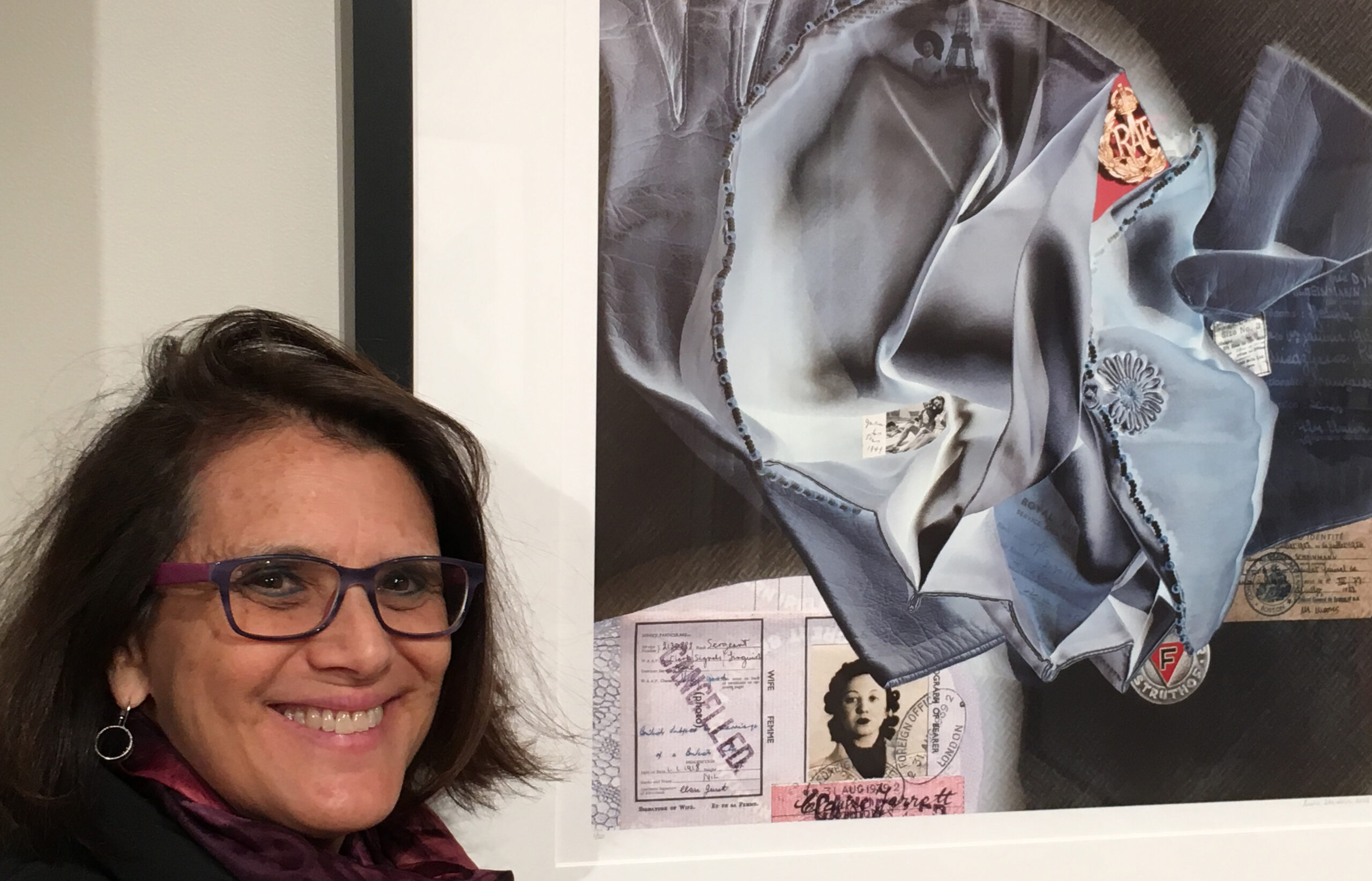 The island of Curaçao was home to one of the oldest Jewish communities in the Western Hemisphere. For her presentation of that Jewish immigration story, Starobin placed a sepia photograph of a mother and her two children on the cover of an old book. A piece of ornate silver from a candelabra the family rescued from the synagogue is in the top left side of the photographic montage.

Starobin conveys other unique immigrations of Jews from Iraq, Iran, South Africa and Libya. One woman from Turkey carried a letter from her boss recommending her as a seamstress. Other photo montages display ketubot—traditional wedding contracts—and passports. The cornucopia of objects, letters and testimony creates compelling portraits of early Jewish immigration in the 20th century. 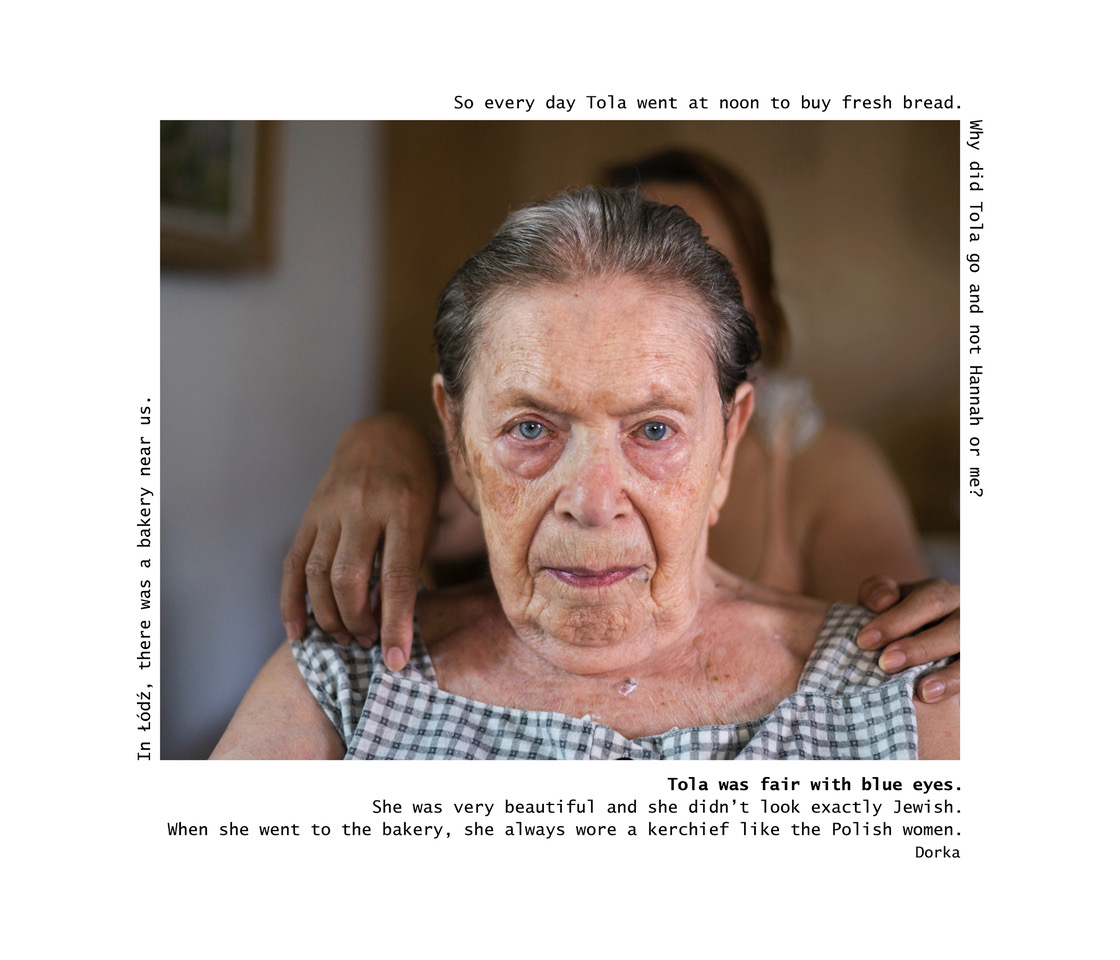 “Looming in the Shadows of Łódź” by Leslie Starobin (Courtesy photo)

Starobin brings some of the spirit inherent in “The Last Address” to her stunning multi-genre project “Looming in the Shadows of Łódź.” A formidable portrait of Starobin’s late mother-in-law, Tola, is the stoic face of the project. Tola was deported to Auschwitz from Łódź and the trauma and miracle of her survival anchors the project. Tola died in Tel Aviv in 2017, and her death prompted Starobin and her family—her husband and grown son and daughter—to travel to Poland in 2019. Starobin said there was some urgency to the trip—Tola’s 91-year-old sister, Dorka, was alive and well and could fill in missing details of Tola’s story. “The idea,” said Starobin, “was to bring Dorka photographs so she could confirm addresses, buildings and gravesites. My son, Ori Segev, a filmmaker, and my daughter, Tamar Segev, an artist, joined us. We also found the diary that Dorka left behind. She started it in July 1945 and left it with a journalist friend who donated it to a Jewish archive in Poland.”

Dorka’s diary was a roadmap for Starobin and her children, who bring their third-generation survivor perspective to the family’s Holocaust history. Ori is working on a documentary based on the trip, and Tamar recreated versions of the entryway to Limanowskiego 48, the address of Tola’s apartment in the Łódź Ghetto. 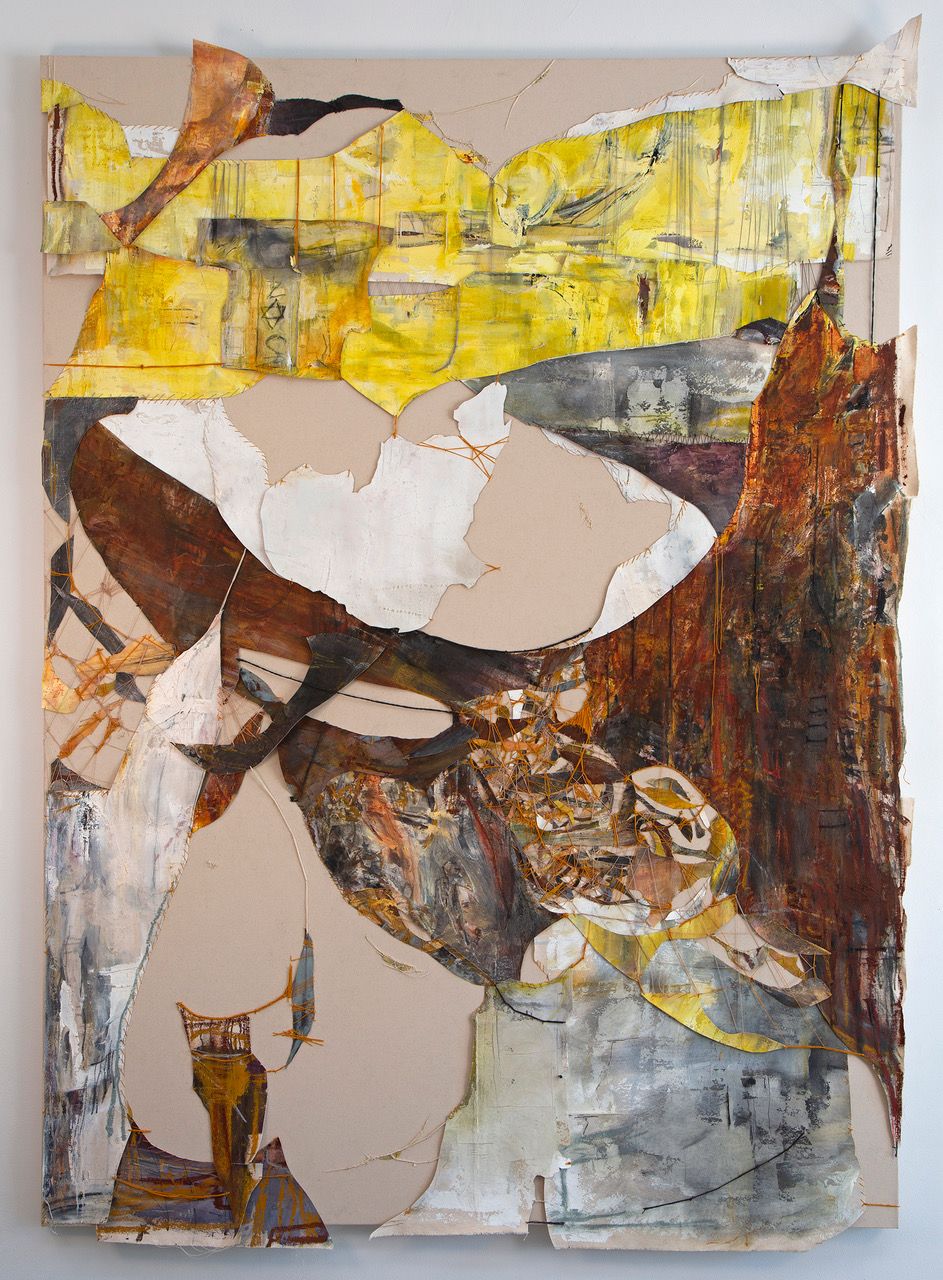 Tamar Segev described her series as “cut pieces of painted canvas, fragments of memory. I then stitch these fragments to a new canvas support, which drastically slows down my process. When I paint, I move around the canvas quickly, applying and scraping paint in an almost frenetic manner. In contrast, my body is braced as I stitch.”

Starobin’s photographs startle as viewers learn the stories attached to them. For example, she chose to include a picture of the church at the entrance to the ghetto used as a clearinghouse starting in 1942 to sort deportees’ belongings. Dorka survived the war when an uncle hid her in a morgue and remembered sorting clothes at the church. “I included the picture of the church in this group of photographs to create a memorial to the ghetto,” said Starobin. 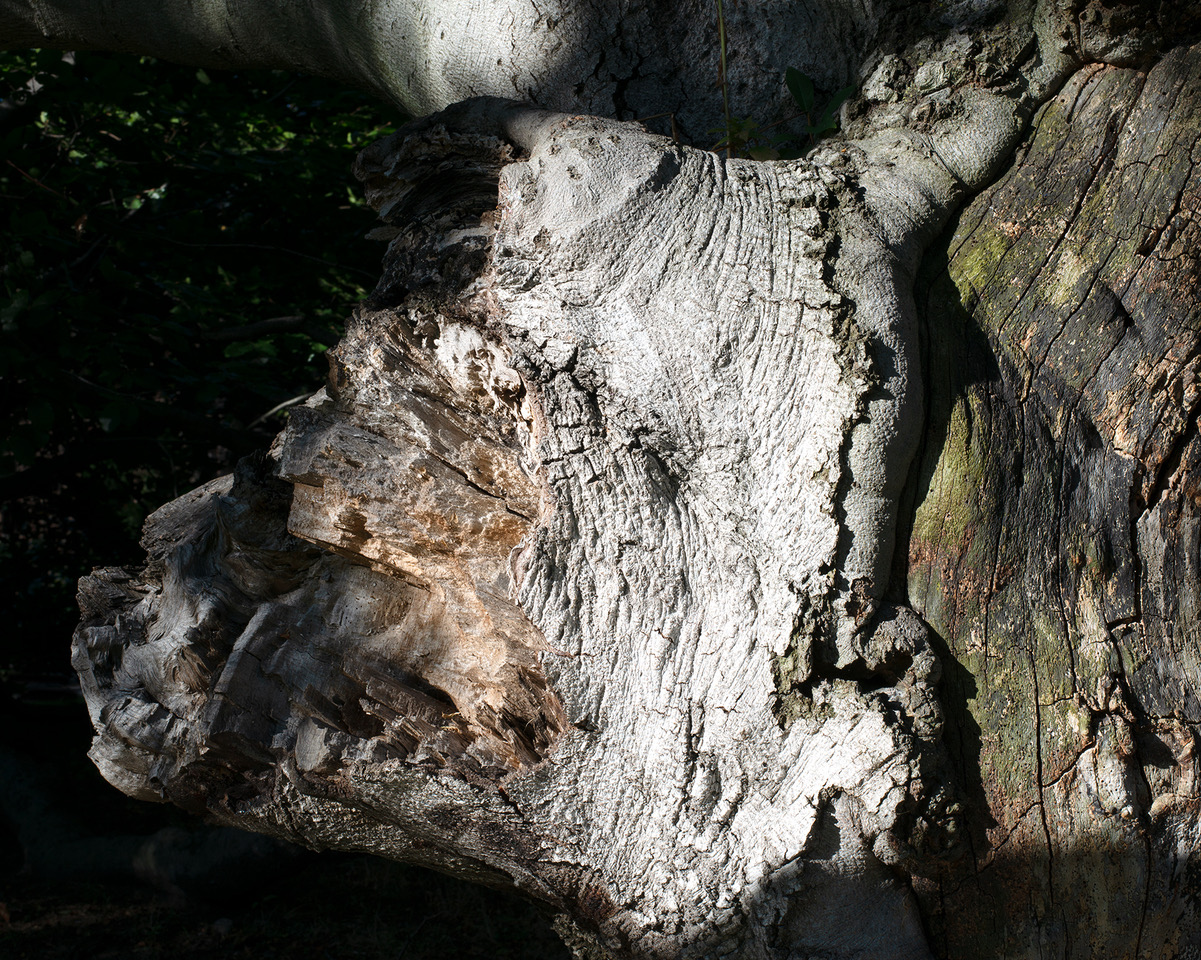 Starobin pointed out that Łódź’s Jewish cemetery is among the largest in Europe. At one time, it was nominated to be a UNESCO World Heritage Site. The cemetery reflects that many Jews in the town, including Starobin’s in-laws, were in the textile industry. “The cemetery was an important stop on our trip,” she said. “My husband’s great-grandmother and great-aunt are buried there. And toward the end of the war, people staked out hiding places there.”

In addition to her immigration and Holocaust works, Starobin has been photographing trees for decades. The images present a living, breathing community of trees that reflect new thinking on trees forming alliances, nourishing each other and sending signals through fungal networks radiating from their roots. “Extinct” is a local tree in Brookline that conjures a dinosaur. The aptly named “Ode to Picasso” is in Seville, Spain, and eerily reminiscent of the painter’s abstract work. “The Orangutan” is in Tel Aviv, Israel. 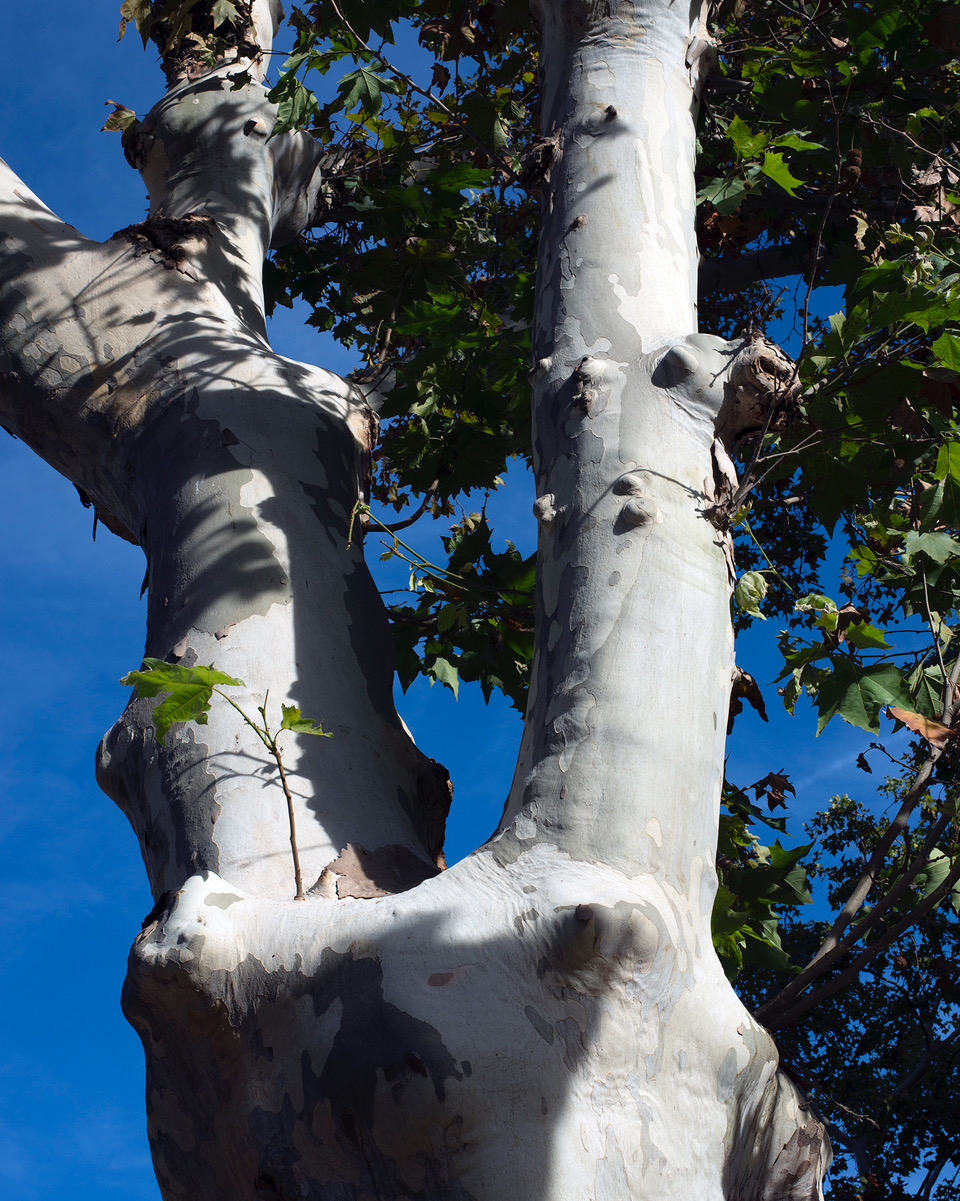 Starobin never wanders far from thinking about immigration and displacement. Her artist statement for the trees series called “Out on a Limb” notes: “Throughout history, people have migrated from one continent to another carrying seeds and saplings with them, greening their new terrains with familiar leaves. I photograph these non-native species, along with indigenous trees, on European boulevards, Mediterranean walkways, and American footpaths.” Her discerning eye captures blanched wood, gnarled limbs and anthropomorphic shapes.

As Starobin gathers facts and pursues research, she also speculates about a family’s history. The origin of objects or trees sparks her imagination. Word and image make for a history that reveals profound truths. 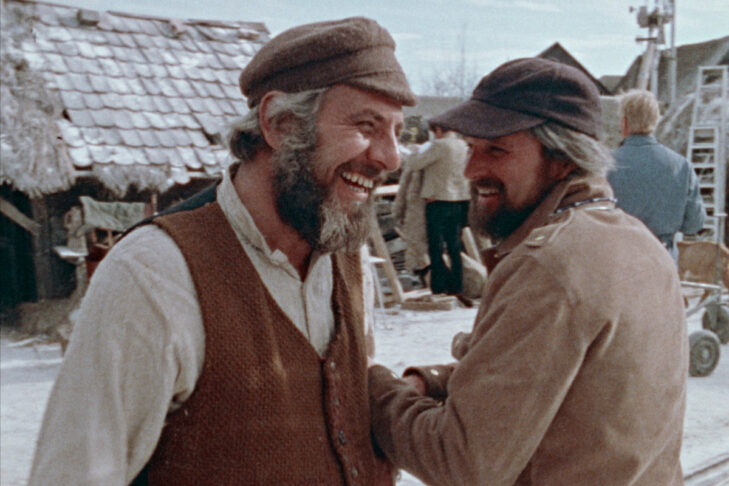 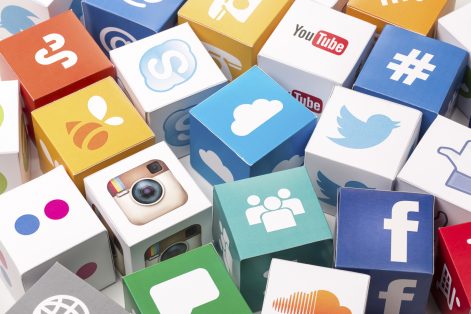 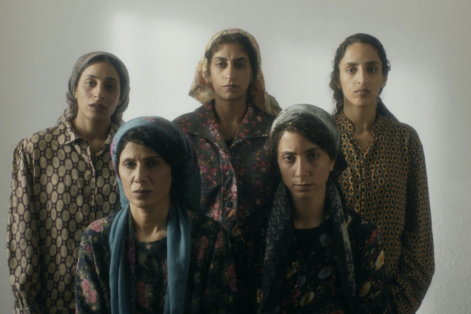