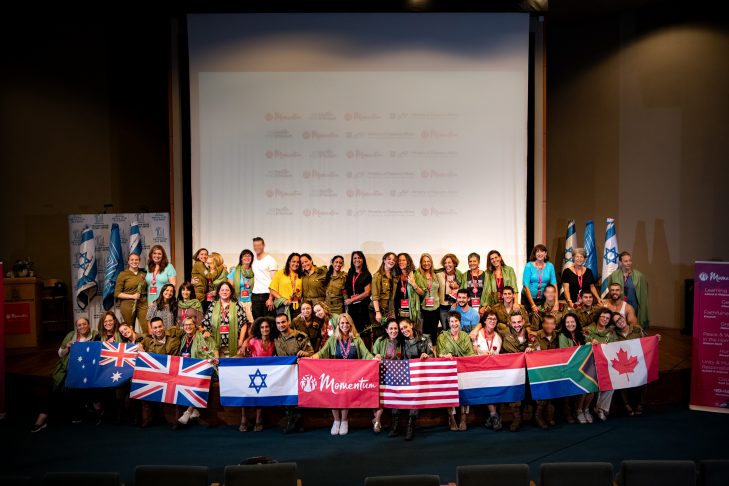 On July 29, moms from around the world traveled to Israel to visit their active Israel Defense Forces (IDF) “lone soldier” children, who don’t have immediate family in the country. The group was organized by Momentum, in partnership with the Ministry of Diaspora Affairs and Nefesh B’Nefesh.

Momentum, once the Jewish Women’s Renaissance Project, designed the mission both for moms to bond with their faraway kids and also to highlight the increasing role of the diaspora in serving in the Israeli military. Moms traveled to Israel from the United States, Australia, Canada, South Africa and the United Kingdom. The group aims to empower women to change the world through Jewish values that transform themselves, their families and their communities through trips such as this one.

Brookline’s Jennifer Ber traveled with the program to visit her 21-year-old daughter, Avigael. Ber has family in Israel, and her daughter grew up making frequent trips there.

“There was nothing more meaningful than getting to take the time to be in Israel and to have a structure to explore this shared experience and identity,” Ber said in a phone conversation during the program. For her daughter, who grew up in the United States, joining the army was a transformative, equalizing experience.

“Everything was so unfamiliar; she felt full of awe. Nobody could be on their cell phones. Everyone’s uniform was the same. Nobody had a different status. She was moved by how, at that point, everyone was equal,” Ber said.

During the trip, a delegation of Israeli mothers from Poreshet, a community for IDF women retirees whose children have also served in the Israeli army, met with the lone soldier mothers to help them understand Israeli culture and society. The moms also met with Israeli mothers of current soldiers to share their experiences.

“The lone soldiers of today are in many ways modern-day heroes of the Jewish people who have chosen to demonstrate their Zionism in a very practical yet selfless way,” Momentum founder Lori Palatnik said in a statement. “But it is critical for us to remember that it is their parents who are joining them in this call of duty, and this special visit gives us the chance to salute the role of the mothers in their children’s experience.”

Over the course of the week-long program, moms were able to spend time with their soldier children and visit the residence of Israel’s President Reuven Rivlin.

Momentum launched in 2009; now, the organization also offers a multimedia website with podcasts, videos and articles that explore real-life topics that Jewish moms experience every day, from mental health to mindfulness to family issues.

The moms on this trip come from diverse backgrounds, and their kids decided to serve for many reasons. The journey, said Palatnik, was a cathartic way for them to share their stories.

“For some, it’s because their kid went on Birthright and came back and said, ‘I want to serve.’ One of them came to Israel for his bar mitzvah, and said, because he saw all these soldiers, ‘I’m going to be a soldier one day.’ Some have an Israeli parent and said, ‘You know what? Even though we don’t live in Israel, my father was born in Israel, and he served. I want to serve.’”

For Palatnik, the most moving part of the trip is reuniting mothers with their children, albeit briefly, for a surprise Shabbat celebration.

“All of their children came holding flowers and gave them to their mothers. It was an incredible, incredible moment,” she said.